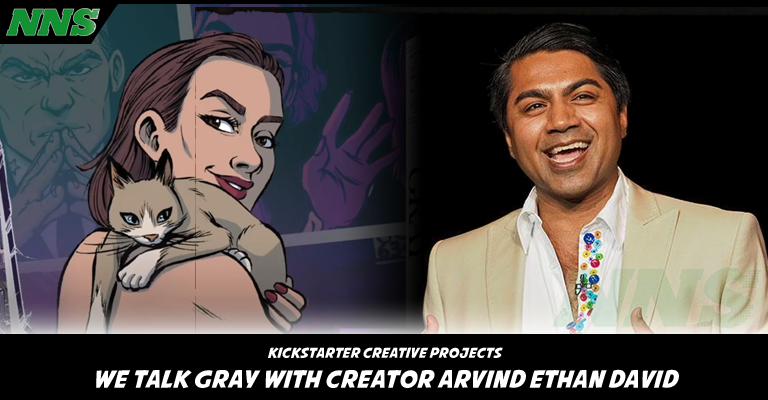 If you saw our prior article, (see it Here), you may be interested in the work of Arvind Ethan David, and more specifically his newest project Gray, the story of Dorian Gray, genderswapped and made modern with a revenge flair as Gray hunts down those that sexually assaulted her 40 years prior and caused her to no longer age.

We took the time, before the Kickstarter ends, to interview Arvind Ethan David about this interesting project.

Eric Bryan Seuthe II: You’ve created a lot of interesting shows, and productions over the years. When writing this story, what drew you to the story of Dorian Gray?

Arvind Ethan David: A lot of my work is building on the work of my heroes: Douglas Adams, Neil Gaiman, Alanis Morissette. I’m someone who has been privileged to make a career out of writing fan-mail.

Oscar Wilde is my OG. I saw “The Importance of Being Earnest” when I was 12. – I think that was the first theatre I went to without my parents, and fell in love with both the glittering surfaces and the dark, sharp hidden parts of his genius.

I didn’t read Dorian Gray till a few years later – my first girlfriend gave me a copy, and I loved it, but it was only later that I realized its moral power. It is a fable about the dangers of living a life without consequences — and we live in a moment in modern life when consequences are coming home to roost for those who have avoided them for too long.

Eric: Deciding to genderswap the main character is an interesting choice. Did the decision to change the character to female come first, or was it the backstory for the character that required the swap in gender?

Arvind: In Wilde’s time, only a man could live a life of debauchery and get away with it. In our time, that’s a woman’s right also, and by making Dorian a woman, we open up new story avenues, give ourselves a platform to take on the big issues of sexual power, and its abuse.

At the same time, I’m very aware of the sensitivity around Dorian Gray’s status as a gay icon, and specifically, a gay male icon. In the original, Dorian’s coded bisexual nature, and his homosexual relationship with Lord Henry Wootan are core to Wilde’s conception, and the reason the book was controversial, even in its censored form, for decades.

Our new version retains a deep interest in sexuality and orientation, and in the discrimination faced by LGTBQ community. Our characters include: Augustus Bracknell, a senior gay detective in the NYPD; Cecily & Gwendolyn, a trans and a cis woman in a committed, loving lesbian relationship; and Dorian herself is magnificently ambisexual.

Eric: The topic of sexual assault is a sensitive one, I’m happy you partnered with RAINN to get support for viewers and listeners who may have been a victim of assault. Did RAINN provide any support, advice or suggestions with regards to telling the story of Gray?

Arvind: RAINN’s partnership is more forward looking; as we bring the work into the world, they are providing warning language, lest the story prove triggering so some readers, and will also provide training to the cast so they are ready to deal with questions from fans about the issues in the story. I’m also hoping they will consult with us as we make the audio drama, and deal with those difficult moments of assault in the story.

Eric: Sometimes switching format can be used for effect, or for purpose. Why did you decide to tell part of the story in two volumes of a graphic novel and then the rest as an 8 episode audio drama?

Arvind: The two mediums both tell the same story. But tell it in very different ways. The graphic novel is a thriller, telling the story of Dorian’s crimes as they happen, and as Detective Hank Wutan frantically tries to stop them, and how the two of them play a game of cat and mouse; their burning sexual chemistry and the tragic and mysterious end they all come to.

The audio drama is told in the format of a true crime podcast, 20 years after Dorian’s terrible crimes, investigating what really happened, and looking back at our time from the perspective of the future.

The two mediums are about as opposite as they can be (graphic = visual, audio = oral) so they also allow me to explore different aspects of the themes and characters that fascinates me. They compliment each other.

Arvind: It certainly completes THIS story. But Dorian is, after all, immortal — and the Wildean universe is, well, wild and large. SO there may be other tales to tell.

Eric: Was it difficult finding the voice for Gray, or did you already have the voice in your head as you wrote the character?

Arvind: Dorian Gray is one of those wonderful characters who is so resolutely themselves. so fully formed in Wilde’s brilliant original, that all I had to do was to create the rooms into which they would walk. Once they were there, they just had to be themselves, and did all the writing for me.

That’s only happened to me once before. When writing another iconic British literary eccentric with the initials “DG”

Eric: What is next for you?

Arvind: Seven amazing and impossible things, none of which, sadly, I’m allowed to talk about yet. But many of them are once again, working with heroes of mine, and reinventing their work for new audiences in new mediums. My career as a writer of fan-mail continues.

Eric: I can’t want to check out the series!

Make sure to back and support the Kickstarter, back it Here, before it ends on May 19, 2021.