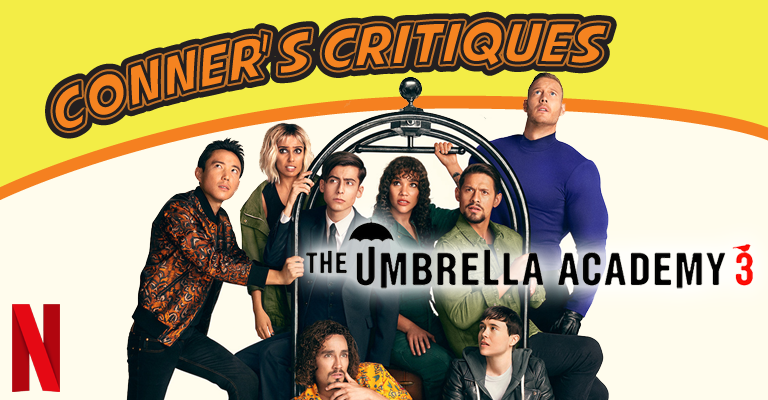 The Umbrella Academy just finished up there third season. If you haven’t seen the first and second season you could check out our review of them Here and Here.

As we always do, we will break this review down by story, acting, and overall. So lets jump into it!

Having bungled up, but somehow successfully stopped, a second apocalypse the Umbrella Academy returns back to their timeline only to discover that they are no longer the residents of their brownstone. A new family has taken a over the space. The Sparrow Academy.

Disappointed by his children in the past, Reginald Hargreaves decided to specifically to pick a different lot of children. Realizing his raising the children caused them to be the way they are, he changes his style of parenting and the new family has grown up slightly different due to it. However, no matter how different they are, they are incredibly similar. As a result of the change the Sparrow Academy is more dark, controlling and commercial then the Umbrella Academy ever was.

Struggling to find a new place in this world, with a second families to contend with isn’t the only thing the Umbrella Academy has to deal with. The actions of their sojourn through time in Texas has caused a ripple effect in the form of a Kugelblitz that is slowly destroying all of reality. Can the Umbrella Academy stave off Armageddon one more time, or do they have nothing left in them.

“The dysfunctional nature of the Umbrella Academy is so fun to watch, and getting to compare what it would be like if they were raised in different ways under different circumstances is an interesting take for this season.”

The dysfunctional nature of the Umbrella Academy is so fun to watch, and getting to compare what it would be like if they were raised in different ways under different circumstances is an interesting take for this season. The Sparrow Academy seems to be everything that Hargreaves wanted out of the Umbrella Academy, but he should have been more careful about what he wished for. It’s a lot of fun action and finally the Umbrella Academy gets to fight people that are on par with their skill and abilities.

Everybody is back, and then some, with every single actor getting a chance to really show off their acting chops this season. Firstly though I have to mention the work of Elliot Page and his character’s transition and how it was handled on the show.

While it must be a relief to be able to not have to play a female character you used to be prior to transitioning, I can only imagine how difficult it must be taking a private and personal matter and then having to act it out in a show for the public at large. While there is definitely some benefit to the American public, being able to see it performed and presented for them, for someone who may not have had it easy in transitioning it could have been very difficult. I commend Elliot Page for enduring since I don’t personally know if he has any trauma from the people in his life in his experiences.

Another break out performance has to be Colm Feore who plays Sir Reginald Hargreaves, and Robert Sheehan who plays Klaus Hargreaves. Their journey together in this season was very light hearted and fun. While I don’t want to spoil things for the viewers, I can say that I was not prepared for what happened down the road.

Another performance worth mentioning in a positive light was Justin H. Min who pays Ben. Having such a well created character that he has mastered over 2 seasons, and then to have to turn heel and play an evil power hungry manipulative jerk must have been quite the challenge. Min did a great job though in spite of the difficulty.

I have to honestly admit that it’s starting to get a little depressing that the Umbrella Academy can’t seem to get right saving the universe.

How many times do they have to destroy their own lives in the process of saving the world? Everything they do seems to just create another apocalypse. If you’ve loved the first and second seasons of the show, you’re really going to enjoy how much fun and different this season feels.

Coming out to your family as anything other than cis-gendered straight can be a difficult process. It can result in receiving support from family members that you didn’t know you needed, or it can result in the upheaval of your entire life. It’s not a choice that anyone gets to make for you, or should make for you. Coming out is something you should only do when you’re ready to do, when your ready to claim your rightful place in this world.

That being said the journey is not always perfect, and a lot of suffering can be endured by those in the process. That’s why I wanted to take a second right now to talk about The Trevor Project. If you have found yourself in need of support and care as a result of family not accepting you, I highly recommend reaching out to The Trevor Project for support. You are not alone.