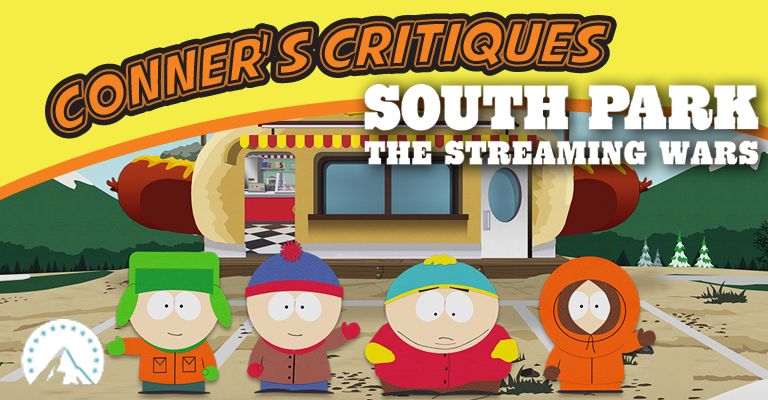 It’s time once again for another South Park movie. This special movie is number three of 14 that were contractually agreed to by the South Park creators.

Paramount Plus it’s quite the genius to lock down content from Trey Parker and Matt Stone. Or was it…

As always we breakdown our reviews by story, acting, and overall. So let’s jump in!

There’s something special to South Park’s ability to tell interesting stories with their newer content. Gone are the days of the boys making fart jokes and learning new curse words. Now it’s time for social commentary.

In this movie, the boys of South Park tackle not just water shortages, global warming, but also the inundation of streaming services.

With water shortages hitting Denver, the farms outside of South Park are given preferential access to the winter stockpile of water above everyone else. With that in mind that a water monitors arrives to Tegrity and Credity Farms to make an offer of purchase left over water rights and selling them back to the people of Denver. However, to be able to be paid, the “streamers” need to confirm that the water they aren’t using streams down to Denver.

All the farms decide to turn to the boys for their popsicle stick boats. They are forced to produce constant amounts of popsicle boats for the “streaming services” to receive payment for their water.

In the background, barely a B story, Cartman comes up with a plan to finally get his family out of the hot dog stand.

“It’s definitely an interesting idea to mix global warming, water conservation, and streaming services into one story. The film even feels like a direct bite back onto their studio Paramount Plus.”

It’s definitely an interesting idea to mix global warming, water conservation, and streaming services into one story. The film even feels like a direct bite back onto their studio Paramount Plus. Biting the hand that feeds South Park. One particular part that resonates is Cartman saying that it doesn’t matter if the popsicle stick boats are good as long as they keep producing anything to “stream.”

While we love voice actors here, it’s hard to specifically single out anyone here as a standout for this movie, or in the South Park series as a the whole. The majority of the voices performed in this series are created from Matt Stone and Trey Parker. Over the years they’ve definitely found a way to master, differentiate, and make each character an individual voice throughout the series. That being said, nothing in this film breaks the mold from what they’ve already done in the past with the voices or acting. This isn’t an insult, it’s just nothing new or amazing in comparison to the other work on their show.

This is definitely a fun and longer episode of South Park. It has running implications for the rest of the series. If you don’t have Paramount Plus the following seasons coming forward for South Park might not make a ton of sense.

So we highly recommend that if you plan to watch the series, that you watch these standalone movies on Paramount Plus!

People usually think that Matt Stone and Trey Parker are liberal, but they’ve always identified as Republicans, or at the very least seem to lean closer to Libertarian.

Even so, they are open minded and equal opportunity offenders. Even if they lean more towards the Republican side, they are more than willing to “now” admit things like global warming. At the same time in the past they made fun of it with Man Bear Pig, but they own their mistake by commenting on their mistake constantly within their South Park universe.

If you want to watch this film, the only current way is to watch it on Paramount Plus.