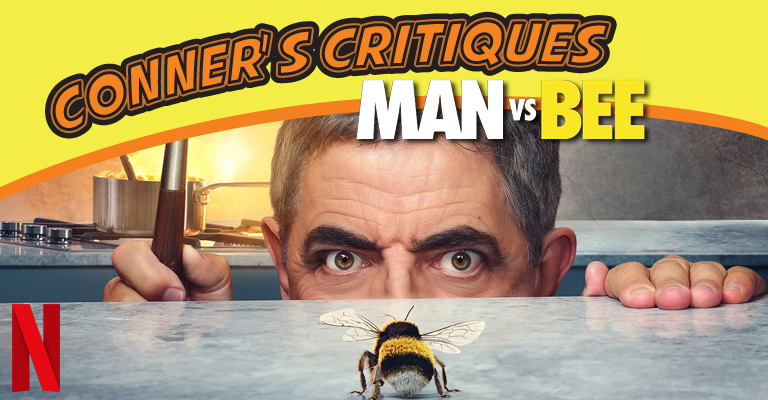 Growing up I loved Rowan Atkinson. I watched tons of Mr. Bean as a child and his comedy style was hilarious to say the least. I regularly quote the series and the comedy bits of Mr. Bean in everyday moments of my life. Mr. Bean was very easy to relate to general life. There’s something lovable and friendly about his oafish and awkward style.

When I saw that he was making a new series for Netflix called Man Vs Bee, I jumped at the chance to review this series. As always we break down our reviews into the categories of story, acting, and overall. Let’s jump on an!

There really is not a lot about this story that we learn in the first episode. As we go deeper into the series we do discover that Trevor, played by Rowan Atkinson, is a general failure. All his entire life he has made mistakes. He has become obsessed with specific things which he blames for his mistakes, and it has led to his failings in his personal and professional life. To be able to afford a vacation with his daughter, he gets a job as a housesitter for high-end clients. His first assignment however is well above his skill level.

Their pet has specific dietary needs, the house is filled with priceless artifacts, and the alarm system and features of the house are well outside of Trevor’s skill level. The trouble he would have gotten into just trying to navigate his way to the house alone would have been fun and interesting, but the show ups the ante by including a bee into the mix. A Bee that specifically drives Trevor bonkers.

While it’s completely unbelievable that an actual bee would go through all of the things in this series, the humor of the situation makes it work for the series’ purposes.

As we said earlier Rowan Atkinson is famous for the character of Mr. Bean an awkward foil. Rowan Atkinson himself however is anything but awkward. The man is quite intelligent and sounds like a statesman. That’s why Atkinson, when playing Mr. Bean, had to have his voice changed to sound weird for his show. As Atkinson has gotten older, our culture has shifted and the sound of one’s voice isn’t a deal-breaker. That is why Atkinson has no issues using his voice for Man Vs Bee. It works even more because his reserved and calming voice plays exceptionally well against the off-the-wall awkward predicaments that he finds himself in within the show.

“…his reserved and calming voice plays exceptionally well against the off-the-wall awkward predicaments that he finds himself in within the show.”

Rowan Atkinson shows in this series that he is just as much the king of awkward physical comedy as he ever was before.

The show itself is a very small series with incredibly short episodes. The story’s concept is very quaint compared to the other larger grander shows streaming on the market. It’s for that reason the story did not get very high marks. There just is not a lot of stories to delve into. While our rating is a little lower, we still highly suggest this show if you are looking for laughs and are a huge fan of physical comedy.

Is it possible just to get another Mr. Bean movie? I’ll even take a Mr. Bean series. I just want more Mr. Bean.

You can watch Man Vs Bee now on Netflix.