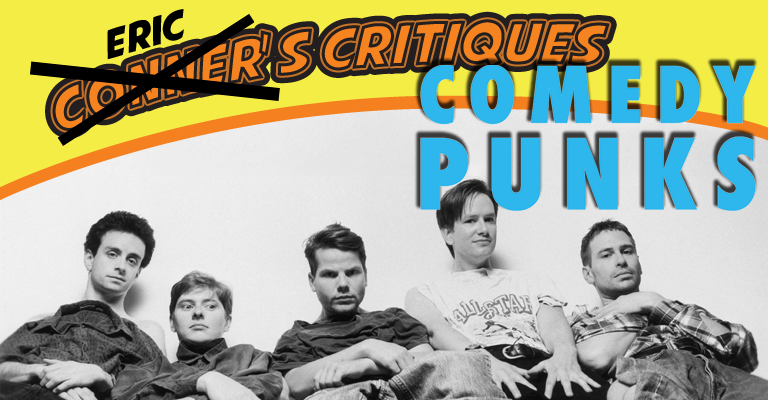 As a child when I fell in love with Kids in the Hall. It was, however, when they were airing the series on Comedy Central. I didn’t really have cable until the late eighties/early nineties, so HBO wouldn’t have been the place where I got to see the show. However, when they put Kids in the Hall on Comedy Central, I would watch the show all the time! I would marathon through episodes every time they came on. It was something myself and my sister would regularly enjoy together. That show got us, comedy-wise.

When Brain Candy came out I saw it in theaters. When Death Comes to Town aired I watch the series eagerly awaiting each new episode.

I am truly a huge fan of Kids in the Hall.

When given the opportunity to review this documentary for the show I have to admit, that our traditional format of Connor’s Critiques is a bit lacking in describing the story of Kids in the Hall. So we’re gonna change up the format a little bit but if you do want to see our review on the actual new limited series coming to Amazon, feel free to check that review out Here.

What is the mission of this documentary?

The importance of this documentary on the Kids in the Hall is not only to cast a light on all the things going on in the background of the show, but to show off awesome never before seen footage of the group’s growing up, forming, struggling to produce the much-loved show, and give viewers a deeper understanding of what the Kids in the Hall have been doing for the last 20 years.

The group together and individually all take the time to walk you through the journey of how they found themselves to be in the group, the Kids in the Hall.

The group together and individually all take the time to walk you through the journey of how they found themselves to be in the group, the Kids in the Hall.

From there the group recounts their struggles to find a place to show off their style, and where they belonged, the rise to fame with their comedy series, the stress the group faced as they splintered off in their own directions, and how they found themselves once again.

Honestly, the documentary goes over a lot of details about their journey, the decisions they made, as well as how they got where they are now. As a fan of the comedy group, even I was amazed at the amounts of details and information I didn’t know that was given to me in this 2-part documentary.

Who would I recommend this documentary to?

If you are a fan of the eighties comedy scene, as well as the inner workings of how a comedy sketch show is formed and the struggles to keep it running, then you would definitely need to watch this series

Obviously, anyone who’s a huge fan of Kids in the Hall should watch this series. It really takes you on a journey through the history of the show and makes you walk away from it loving the group even more than you already did.

The film is definitely very long. A long way to go for a documentary about a comedy troop, but as a fan of the group I didn’t find that it was overtaxing due to the length of the documentary.

Due to the length, they broke the feature into 2-parts and if you have the time, it’s worth watching when it launches on Amazon on May 20, 2022.