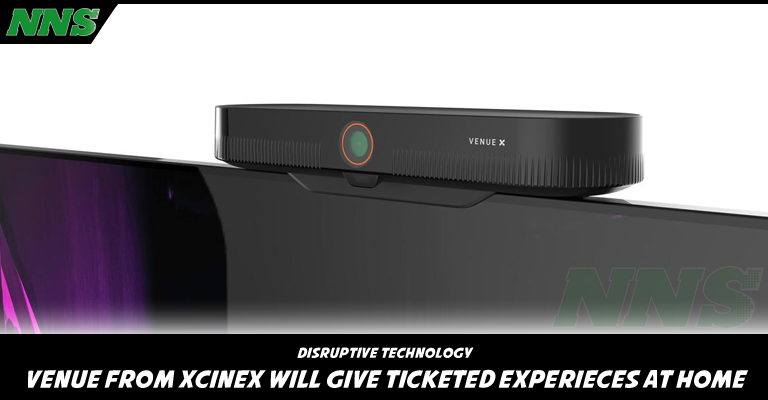 The question of “Will theaters ever bounce back?” is on the mind of many, especially with giants like Arclight Cinemas and Pacific Theatres not surviving the pandemic. Many studios have shifted to on-demand, and streaming releases with the closures of theaters, and they may never return to a solely theater release.

However, studios aren’t ready to give their content to audiences for free with streaming services, well… except for HBO Max.

So how will the world change? One company XCINEX has a solution for this with their VENUE camera system for home televisions.

The Tech
VENUE is a streaming platform, with optional tech to provide a camera system to find and monitor viewers for the purpose of ticketing and metering content.

The device uses AI to find the headcount in the room so you only get charged for the people watching the movie. Think of it as the turn style at the subway station. No employee will be monitoring your headcount, to keep your privacy secure.

One of the biggest concerns in the marketplace though is about web cameras in our home, and their vulnerability, so XCINEX includes with each item a magnetic lens cover to block video recording when you are not using the service. Additionally, the camera has a red halo which will illuminate to inform you that it is active, for peace of mind.

Why Box Offices Are Important
Studios don’t specifically need theaters to produce content, but movies, as they are, are built around the concept of it. If you love streaming content, and episodes released over the course of several months, then box offices don’t matter.

However, if you love self-contained stories that hold your attention for an hour or two, then theaters and their long-form forced in-house viewing allow studios to stoke interest in a way similar to a monthly streaming services long-form content.

If theaters go away, then what is to stop the major studios from shifting to mini-series, or long-form series like Disney has done with their Mandalorian and WandaVision stories. They will likely in the end be more valuable for them in the long term.

One Person One Ticket
One drawback a lot of users found about streaming is to watch the film once, they have to spend around $20 bucks to watch it, even if they are the only one in the room. XCINEX’s camera solves the issue with their viewer recognition system.

The device will scan the room to get a headcount of viewers, and that way the right amount of people are charged. This feature will allow the marketplace to charge appropriate prices per head, and prevent overcharging single users.

The party to lose out on this of course are large families, but that has always been the case if a family of seven wanted to see a newly released title.

Versatility Is Key
With many different tech in our homes, the idea of creating the same experience everywhere is questionable. XCINEX has a solution by providing three options.

Join The Tech Family Of XCINEX
If you believe in the XCINEX family, and want to support them in their tech endeavors, then you can now do so!

Head over to WeFunder and invest in the company that might provide the solution that studios want, but be warned, this might be the final nail in the theater coffin.

They initially raised over $330,000 in their first 10 days on WeFunder, and unlocked more investment goals.

So no matter how you will do so, you will always be able to enjoy brand new blockbusters thanks to technology like these.