Jurassic World Evolution 2 by Sold Out

Return to the world of Jurassic World in the sequel to Evolution the 2018 management simulation. Jump back in with new campaigns, new features, and new dinosaurs! This game is set after the events of Jurassic World: Fallen Kingdom, as your work to control, conserve, and contain dinosaurs with the giants of the franchise, Dr. Ian Malcolm, Claire Dearing, and Dr. Henry Wu. 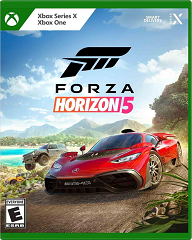 Forza Horizon 5 is back exclusively on the Xbox Series X and Xbox One. Play with new characters in a vibrant and even more realistic landscape as your tear up the road in Mexico! From deserts to jungles with cities and beaches in between! Play for free with Xbox Game Pass Ultimate!

Venture into the post-apocalyptic world of a demon-infested Tokyo. Now called Da’at, the city has needs a hero, and you have to venture through the place, and survive as you attempt to find the answers to what happened.