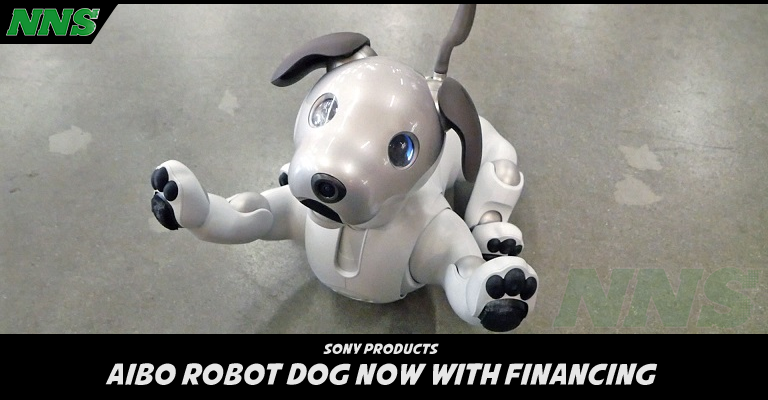 Do you have a mighty need for a puppy, but you don’t have the space/time/money/your landlord is a monster? Consider aibo!

aibo is Sony’s solution to the household that can’t support an animal, while still offering the comfort and fun of playing with a pet. The tiny robot doggo has expressive eyes, capable of conveying expression without being creepy, a sleek body design that’s rounded like an actual animal instead of squared like you see on most robotic pets. The body is expressive as well, as aibo can scratch his ear, lay down, sit, wag his tail, and even show a difference in his stance based on his environment’s temperature.

Because aibo is a robot puppy, he comes pre-loaded with tricks, so you don’t need to spend extra money on hiring a trainer! No accidents in your house! He moves in hundreds of patterns and gestures, offering enough variety to make you forget for a minute that he’s not real. He can perform a large number of tricks, like the “snoot challenge” where you hold your hands in a circle and aibo will try to walk to you and put his snoot in the hole. Say “very lovely aibo” to get him to do a dance and sing for you. You can also play dice by telling him to throw the dice. aibo will put the dice in his mouth and then throw it. If aibo finds dice on the floor, he might even do this on his own.

Curiosity drives this gorgeous, playful pup. He can see and communicate with his environment, and the more time you spend with him, the more he will understand. aibo develops a personality by playing with you. He can see things around the environment to help avoid obstacles, sure. But he can also see who and where you are, and head on over to play with you. And like the dice game example I mentioned, if he sees an object he wants to play with, he can play with it like a real dog. When you call to him, he can recognize the direction the sound came from without having to first scan the environment. Additionally, he can feel sensations. If you pet him, he responds. Chin, back, or nose scritches, he can feel it all and react appropriately. And if aibo ever acts up, you can thwap him on the nose with a newspaper.

aibo even has personal preferences. He loves the color pink, and will respond really well to pink toys. Conversely, he doesn’t react well to tight spaces or heights. If placed in an uncomfortable situation, he whimpers and shrinks down, showing nervousness.

When I visited the Sony Digital Media Production Center, they had an aibo wandering the premises. What a cute pupper! As someone who isn’t a fan of most robotic creatures, as the uncanny valley seems to have a huge effect on my comfort level as a human, I was enthralled by this little guy! Sadly, I couldn’t justify dropping the $3000 to own him. But here’s the good news:

Sony is now working alongside PayPal for financing terms! 12 months at 0% APR or 36 month financing with 12.99% APR. The cost of interest is divided into the monthly payments. So you’re looking at payments of roughly $250/month for a year, or $84/month for 3 years.

With the new flexible financing options, you can expect to see little aibo messing with my cat, pretty soon!

What do you think of aibo? Isn’t he the best robot boy? What other items do you want to see info or reviews for? Let me know!