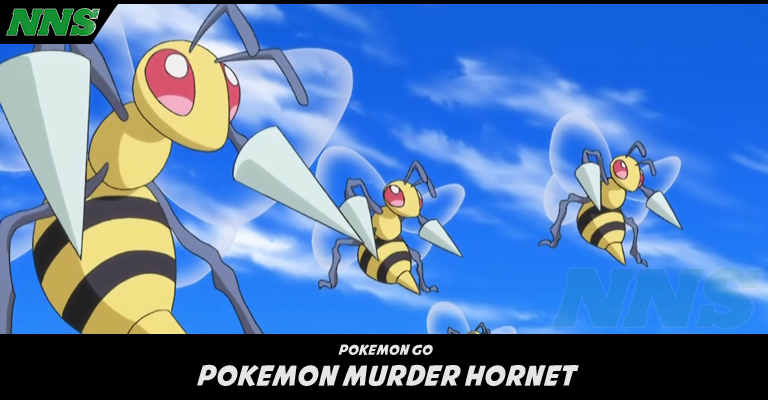 What’s up, Trainers? How is your Pokemon Journey working out right now?

I know it’s a little rough, especially for dedicated players, considering going out is kind of difficult in these times. Not only do we have a killer virus to worry about, but now we have killer hornets to contend with? Yikes.

Well, being kind of a bug nerd I thought I’d write a little article, just for fun, on these new visitors to the American Pacific North West and then follow it up with their Pokemon counterpart. 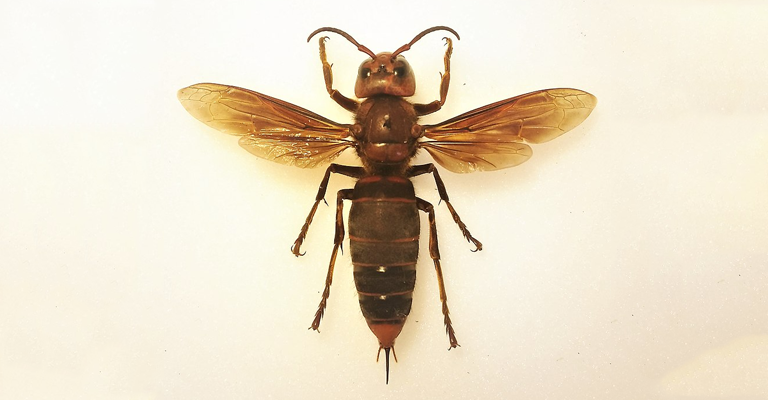 This freaky looking fella can be found across tropical climates in East and South Asia and even in the Easternmost parts of Russia. It’s usually a little under two inches long. It loves to live in forests and rarely ventures out into open areas like grassland. This is, probably, due to the way it likes to live in re-purposed rodent burrows and in the nooks and crevices created by tree roots. It’s an impressive hunter and part of the reason they’ve been referred to as Murder Hornets is that they generally kill their prey by decapitating it with those scissored jaws. It’s kind of grisly, but not nearly as bad of a way to go as the unfortunate prey of some other wasp and hornet species. (If you’re a Spheksophobe, never, ever look up the way that the tarantula hawk wasp provides for its babies. But then again, if you have a phobia of wasps, my guess is you’re probably not reading this!)

They also like honey and other sweet things, just like any other wasp. This does bring them into conflict with honeybees, of course. Japanese honeybees have a very interesting way to deal with this threat. They lure the big bug in and then pounce on it, covering it in a living carpet of bees. You might think that then comes the stinging… but you’d be wrong. Remember, when bees sting, most of the time they die soon after. What they do instead is beat their wings fast. So fast that it generates temperatures so high that the hornet can’t take them. It dies, leaving the more heat resistant bees to fly another day. Unfortunately, honeybees in America haven’t developed this defense so when a giant Asian hornet comes across one of their hives, it results in a massacre.

Giant Asian hornets were discovered in the Pacific Northwest in 2019 and since then, there’s been a relatively concentrated effort to get rid of them. My own personal theory is that a rough winter or two will probably take care of them, but as Dr. Malcolm warned us “Life, uh. Finds a way.” and we may see them develop a resistance to the cold over a few generations. We’ll just have to wait and see.

While it’s true that they do kill people, and multiple stings from one are very dangerous, I think the term Murder Hornet is a little harsh. They’re just doing what they evolved to do and it’s not their fault that they’re doing it in the wrong place. I prefer the term Kaiju Hornets.

Anyway! They have a pretty clear counterpart in the Pokemon world – the Original Kaiju Hornet, Beedrill! 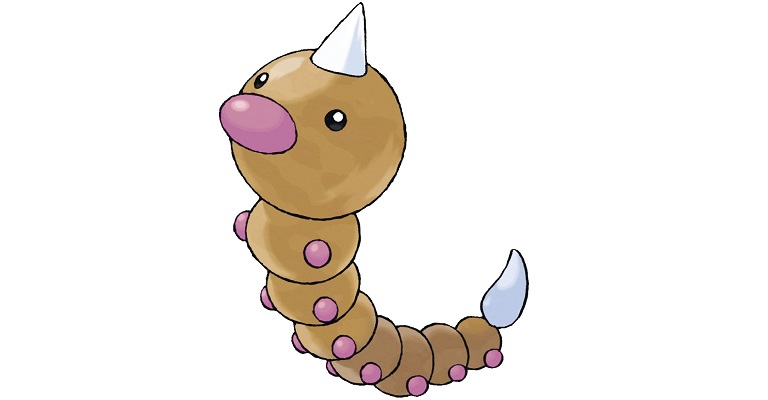 Weedle are an adorable little caterpillar Pokemon that you can catch in Viridian Forest back in Blue, Red, and Yellow versions. There’s not a lot to say about them, really. String Shot and Poison Sting were both annoying to deal with for us as beginners. And this was in the days before Pecha Berries, mind you – we had to buy Antidotes and those were expensive. The Pokedex tells us that Weedle’s head-mounted stinger is usually two or so inches long and is very potent. It’s brightly colored to warn off enemies and it will sting you if you step on one, which is concerning considering it’s a very common Pokemon in woods and grassland. It eats its own weight in leaves daily and can use that big red nose to sniff out its favorite ones.

Beedrill has a total of three stingers. One on its butt, as one would expect, and two lance-like stingers on its forelimbs. You shouldn’t approach one in the wild as, oftentimes, this will cause a swarm to attack you mercilessly. They will sting multiple times while flying at high speed. 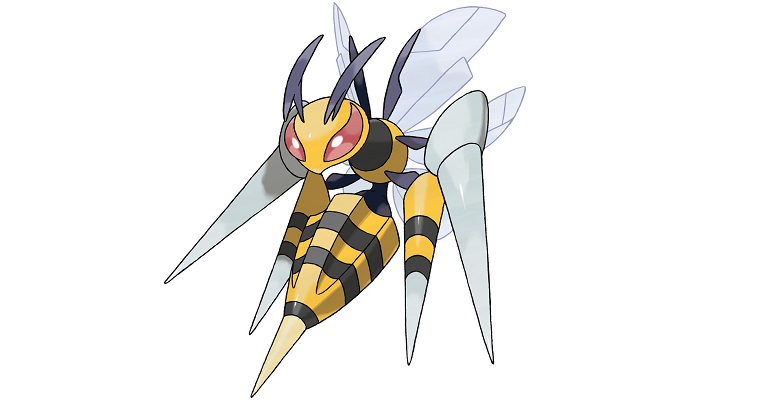 How does this play out in Pokemon GO? 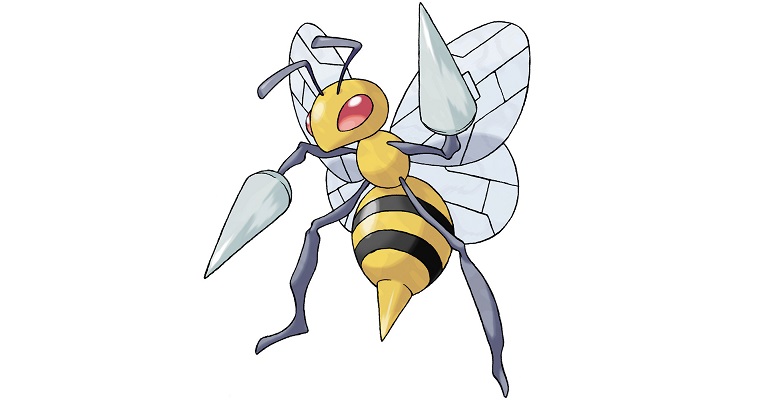 With a Max CP of 1846, Attack of 169, Defense of 130 and Stamina of 163…. yeah. It better attack in a swarm. It’s not going to gain much traction, otherwise. It’s a Bug/Poison-type and as such it has weaknesses to Flying, Psychic, Rock and Fire-type Attacks. It resists Fighting and Grass Type Attacks very well and has standard resistances to Bug, Poison, and Fairy-Type Attacks.

In terms of Fast Attacks, it can learn, it has a Legacy Attack in Bug Bite. Other than that, you get Poison Jab and Infestation, both STAB. For Charged Attacks, you have access to Aerial Ace, X-Scissor, Sludge Bomb, and Fell Stinger.

Well, there you go, Trainers. A little info on the real-life giant Asian hornet and its Pokemon counterpart. How about that thing with the honeybees? Weird, right. Huh… that reminds me. Honeybees have a Pokemon counterpart too, don’t they? 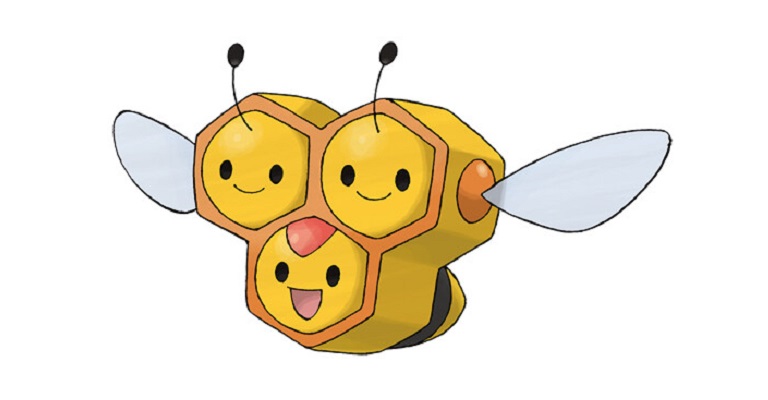 Combee was introduced in Generation 4 as a way to show off one of this game’s new gimmicks. You could gain an item called Honey and smear it on certain trees around Sinnoh to attract certain Pokemon over time. One of these Pokemon was, you guessed it, Combee. It had a pretty small chance of appearing which was especially frustrating at times because male Combee cannot evolve. Only the, much rarer, female Combee would become Vespiquen. 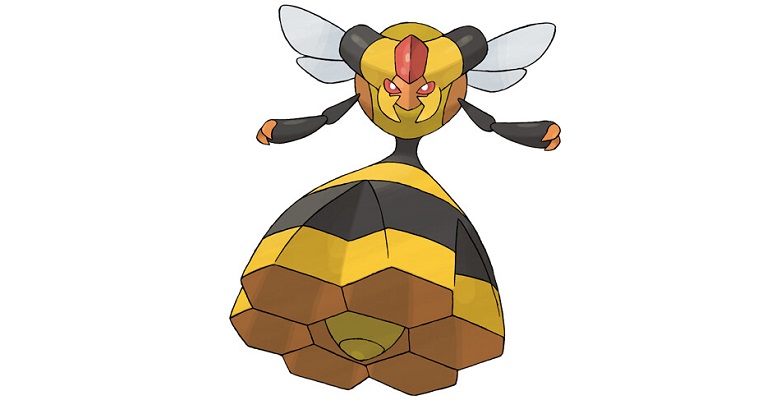 The Pokedex tells us that, like many other Pokemon, this one is a gathering or three individual Pokemon. They’re together from birth and work hard every day, collecting honey for their Vespiquen… well. Queen. Each one has a slightly different taste in nectar, which must lead to some interesting internal squabbles. At night they gather together in clumps of between one hundred and a thousand. Femme bees can be identified by the red triangle on the lower bee’s forehead.

Once the female Combee reaches level 21, it can evolve into Vespiquen.

The weird thing about the name for this Pokemon is that the Vespi in its name clearly refers to the word Vespa, which is the taxonomic classification for the Giant Asian Hornet. Is this a bee or a wasp, Gamefreak!? Why are you toying with my emotions like this?

Anyway, the Pokedex informs us that the six holes in its dress-like lower half are actually chambers containing its grubs. It uses pheromones to get the grubs to do her bidding, including attacking her enemies. She feeds them on the honey bought to her by her Combee attendants and, much like most real bees, there’s only one of these matriarchs per hive. (I have to wonder if we’ll ever get a pre-evolution for Combee that’s a grub. I think it would be cute!) You even get to see this in action with Vespiquen’s signature moves – Attack Order and Defense Order, which see swarms of bees do her bidding.

It has a Max CP of 2005, Attack of 149, Defense of 190, and Stamina of 172. So, despite being a little more bulky, it’s still not going to be your best Bug Type option. It’s a Bug and Flying Type, which means it’s especially weak to Rock, with regular weaknesses to Ice, Electric, Flying, and Fire. It’s especially resistant to Ground, particularly resistant to Grass and Fighting Type Attacks, and has a normal resistance to Bug Type Attacks.

In terms of its own Attacks, we’ve got Fast Attacks in Poison Sting, Fury Cutter, Bug Bite, and Air Slash, all STAB Charged Attacks are Power Gem, Fell Stinger, Bug Buzz, and X-Scissor, the latter three of which are STAB. So, no inclusion of the main series games signature Attacks for this Pokemon. Maybe one day!

Well, Trainers, I think that’s all the bee-business I’m equipped to handle, today. I hope you found this information illuminating or at least entertaining. How do you feel about the Kaiju Hornets? And do you like the Bug Type Pokemon in today’s spotlights? Feel free to let me know in the comments! As always, I wish you the best of luck, happiness, and health.