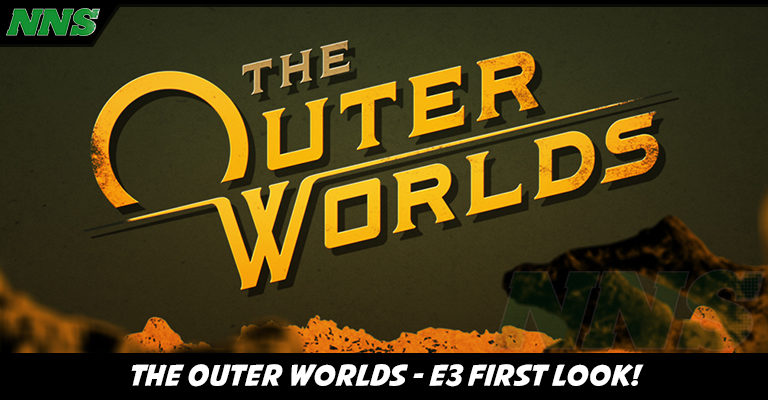 This year at E3, the world’s premier event for computer and video games and related products, Nerd News Social hit the floor to get you some exclusive inside looks through photos, connections, and first hand looks! We were able to be invited for a special look into the game The Outer Worlds from Obsidian Entertainment, so let’s get started!

Co-game directors Tim Cain and Leonard Boyarsky, original creators of Fallout, have reunited for this new single-player RPG from the renowned team at Obsidian, developers of Fallout: New Vegas, Star Wars: Knights of the Old Republic II, South Park: The Stick of Truth, and the Pillars of Eternity franchise. We got a first hand look into some official game play.

Lost in transit while on a colonist ship bound for the furthest edge of the galaxy, you awake decades later than you expected only to find yourself in the midst of a deep conspiracy threatening to destroy the Halcyon colony. As you explore the furthest reaches of space and encounter a host of factions all vying for power, who you decide to become will determine the fate of everyone in Halcyon. In the corporate equation for the colony, you are the unplanned variable.

During the game play, two major things stood out. One was what you decide to upgrade in and about your character, have a huge part of how the game, and ending, plays out. Certain decisions you would like to make can fail, if you for example, do not work on or level up skills such as areas of negotiation. The game tracks your experience to find what you aren’t particularly good at. You can also play the game as good, evil, or my favorite… psychotic.

Another thing that stood out is the ability to have different companions that will help you along your journey and also give you certain abilities depending on who you bring along with you. These companions all have their own missions, motivations, and ideals. It’s up to you to help them achieve their goals, or turn them to your own ends. But be careful, because if you do something they don’t like, they might just abandon you.

Combat is first person, and weapons will include pistols, laser rifles and sci-fi scythes as well as other melee weapons. Just like making decisions on your characters personality, you’ll also be able to modify your weapons, upgrading them and picking different ammo types.

So what do you think? Will you be playing this game? I can tell you that we are very excited!