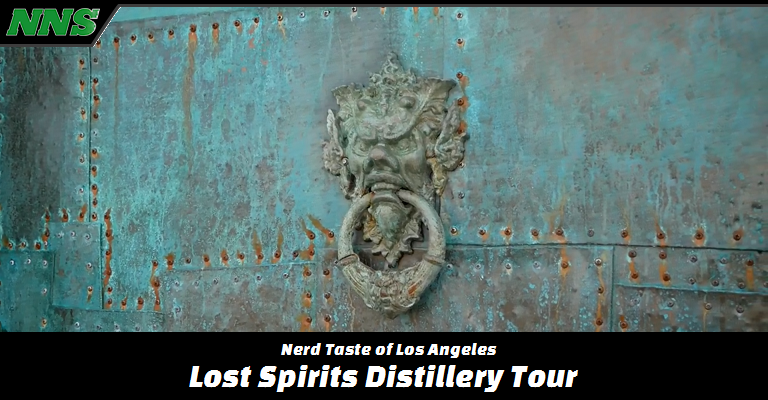 There is something inherently stimulating about an expertly forced perspective. We’ve all seen photos of tourists propping up the Tower of Pisa or Instagram influencers holding a setting sun. Instead, visit your local art gallery and you’ll find artists that can force not only your visual perspective, but an emotional one as well. This is how it feels walking into Lost Spirits Distillery.

As of writing this, It’s been almost a week since my visit there and a finite definition of this small batch distillery still remains mostly ethereal, and my ability to put them in a well outlined box continues to fall just short. There is also the issue of spoilers, which any self-respecting storyteller must seek to avoid. So, I’ll attempt to leave their narrative alone, as that’s a story best told by proprietors themselves.

Instead, I’ll attempt to nail down what makes them special. Lost Spirits is located in the Arts District of downtown Los Angeles. If you’ve never been to the Arts District it’s worth a trip, even without an exciting destination like Lost Spirits. In fact, no destination is required at all. Just head down towards MACA and see where the day takes you. As it turns out, that type of open mind is also the best way to approach the distillery. 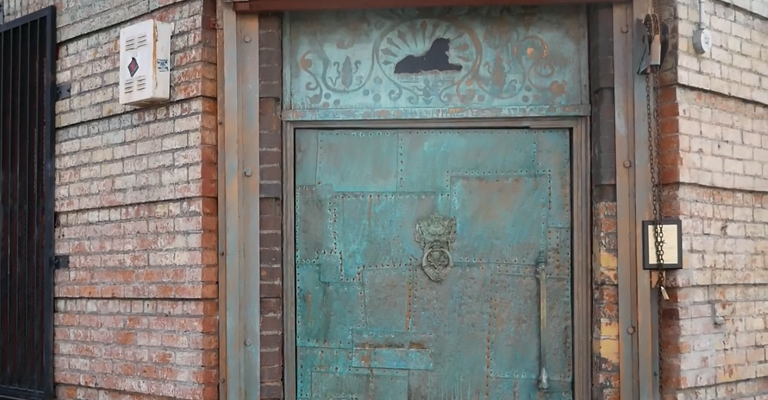 There is nothing that shouts “Distillery” to those passing by on the street. In fact, there’s nothing that even whispers it. In a world of boastful branding, Lost Spirits is, at the street level, near silent. Google lead us to the corner, and sure enough, there was a street corner-facing door with a subtle sense of what I can only describe as “Old World Whimsy.” 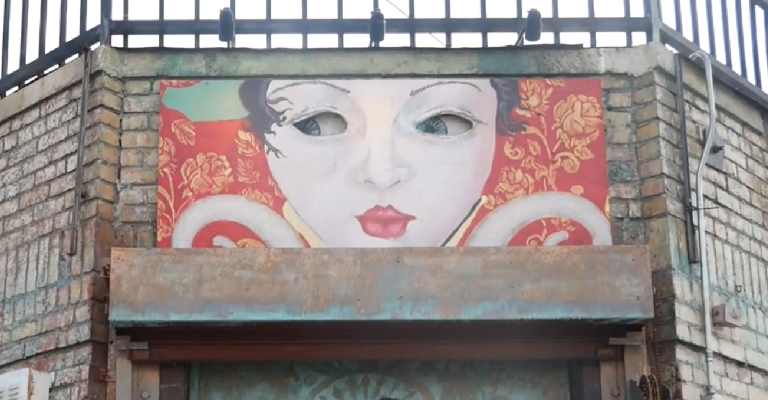 On this heavily weathered green metal door is mounted a large ornate door knocker; a sculpted head of what appeared to be a deity, perhaps some semblance of bacchus or the Green Man. Above it a curious painting with eyes that only my producer thought he saw move. It’s hard to say whether or not I believe him. I believe he thinks he saw it, but whether it did or not is too hard to say. Why bother to mention this hypothetical discrepancy in accounts? Because this may be a perfect example for the footing this hidden gem puts you on. I was delightfully uncertain the entire time.

We were greeted behind this imposing door by a long haired gentleman dressed in all black and wearing a matching ankle length cape. Now, it’s worth mentioning that this was less than a week before Halloween, and that much of the staff was in varying degrees of casual costume for the occasion, but that doesn’t mean he seemed out of place. His casual charm put us at ease while we waited, and as we began to ask him questions, he revealed that it was his first week and gracefully referred us to our hosts who were about to arrive. (Note: For someone new on the job, the sense of professional grace confident humor seemed surprising. I think it’s the cape that bolstered his charisma stat, and I for one vote that we bring back these dramatic pieces of outerwear, but that’s a subject for another time.)

We were escorted on the tour by one of the founders Joanne Hurata, who was incredibly warm and welcoming to us. Joanne remained mostly quiet during the tour, but was it was apparent she was happy to join us along the way, letting her accomplishments speak for themselves. Her abundant warmth and enthusiasm could readily be seen as we thoroughly enjoyed a taste of her brandy, or turned a new corner and stumbled into some new vignette that we didn’t expect.

Also joining us was Co-Founder, and one of the multiple in-house mad scientist/artificer/bards, Dr Wynn Sanders. Sanders is an ex Air Force officer of 14 years who, in his own words, did over a year of extra duty just to obtain the rank of Colonel. Based on that nugget alone, you could say that Sanders has a deeply committed sense of humor. 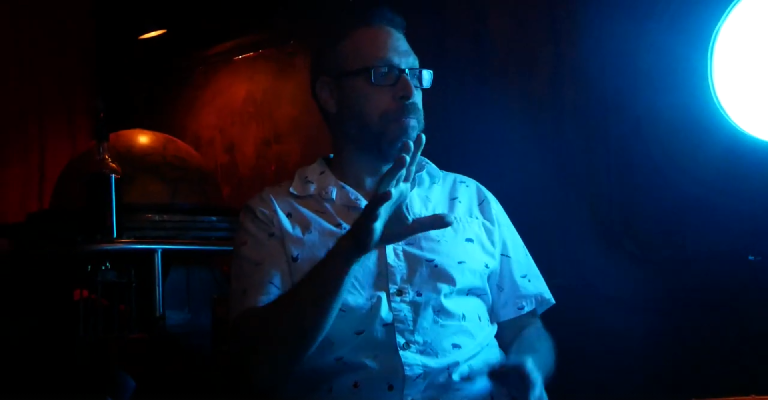 Humor is definitely a through line of expression at Lost Spirits, but regardless of what you hear, very little of it is a gimmick, but more on that in a moment. With our camera person, my producer, Joanne, Wynn, and myself in tow, we were whisked away into the first room. With seating for more than a dozen, we took seats near a table in the middle of a delightful outdoor patio. Wynn regaled us with the inspiration of the names of the first and last whiskeys we were to sample, taken out of their first edition copy of H.G Wells’ The Island of Doctor Moreau . “The Crying of the Puma” and “The Sayers of the Law”, respectively. Were were poured a tasting of the prior, and that’s when my perspective came more clearly into focus.

I could clearly place it as fine whiskey, and well peated.. But that would seem to infer a Scotch style whiskey… which I suppose it was… but it was so much more. It was smooth, deeply complex and layered almost to the point of severity. It was, above all, undoubtedly delicious. It was clear then that these were far more than talented and fun loving artists who decided to jump into the booze game. I had read prior to my visit that their wares were almost universally held in high regard, and that they had won some rather prestigious awards. I am of the opinion that professional critics and judges often miss the forest for the trees, and so I held my judgment until tasting it myself. The first sip kicked the doors of pallet so far open that I struggled to close my mouth after swallowing, let alone to find words to describe it in the moment.

Thankfully Wynn and our guide for that part of the journey did much of the talking for me, and I found footing again as we wound our way through the grounds to our next tasting. I’m purposefully redacting and skipping over major twists and turns in this adventure, but we eventually found our way to the Reactor.

Yes. The Reactor, or more precisely, one of the Reactors. You see, what gives these spirits their character is a specialized process of rapid aging. They use heat and light to accelerate the maturation of the spirit in question, and accomplish in a couple weeks with modern technology what takes traditional barrel aging methods around 20 years to complete. The tributes to H.G. Wells’ mad doctor are becoming clearer. The reactor we were shown was starkly beautiful and elegant, their centerpiece displayed with the flair of a Big Top Ringmaster. 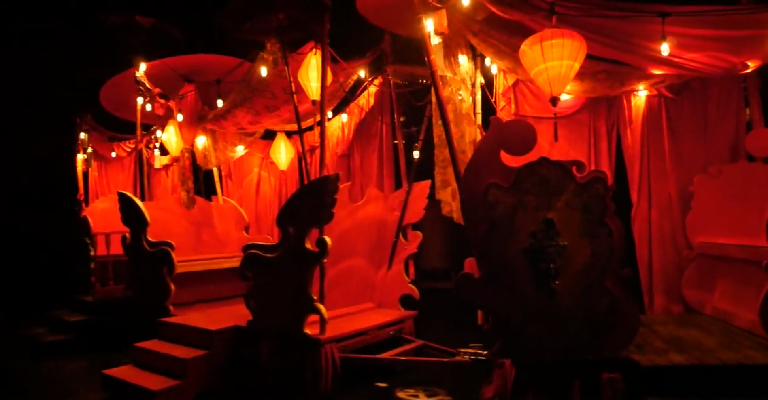 It was nothing short of mesmerizing, and before we knew it we were off to our final tasting, but not before visiting the lab where they use in-house gas chromatography-mass spectrometry to test the tweakings of their latest creations. They adjust the variables of distillation and aging more often than the actual ingredients, in what is one of the most creative and masterful displays of high tech “Kentucky Windage” I’ve ever seen.

The final tasting, as I alluded to before, was the “The Sayers of the Law,” another whiskey. In fact, the “same” whiskey as they gave us at the beginning of the tour, save for the fact that they speed-age the whiskey on charred oak here, and toasted oak in “The Crying of the Puma.” That’s where the similarities ended. This was altogether a different experience with darker, smokier notes. It tasted almost unrelated to its sister spirit, as if it was from another distillery altogether. Any sense of lineage had been broken with this masterful tweak to an already impressive process. It was the perfect way to wrap up the tour.

As you have undoubtedly surmised, I’m not giving an in depth review of the four spirits I sampled. For one, I don’t want to take away from the facility, the process, and more importantly the people that I was fortunate enough to meet and experience during my time there. Describing the tasting notes in detail here would distract from the experience of the place itself. Second, I need to spend more time with each of these Spirits individually. They’re not challenging to enjoy, but they deserve a thorough review of a glass or three, and I’ll wait until they’re in front of me for that.

Hell, I’m not even giving you a real description of the tour. A cursory googling of the tour can spoil all the fun for you if you’re the type that reads the synopsis on a movie you’ve never seen. All I’ll tell you is that it’s thematic and theatrical. Some (many) have described Lost Spirits as Willy Wonka’s Distillery. At first glance the fantastic chocolate factory is fun and outlandish, but the fantastic chocolatier lacked something that Lost Spirits has in spades, and that’s self awareness. They’ve found a new way to do something well, and they’ve celebrated their process of discovery along with the quirks (and electrical fires) that came along with its development. The (often quite literal) twists and turns that we’re shown come off as humorous and deeply personal tributes to the madness behind their revolutionary method. Every trinket and bauble is in actuality an heirloom of the road less traveled. The tour experience is not a gimmick. Its pure, unadulterated self-expression that pays tribute to the scientific craft that they’ve mastered. It is, in fact, the forced perspective of the creative genius. 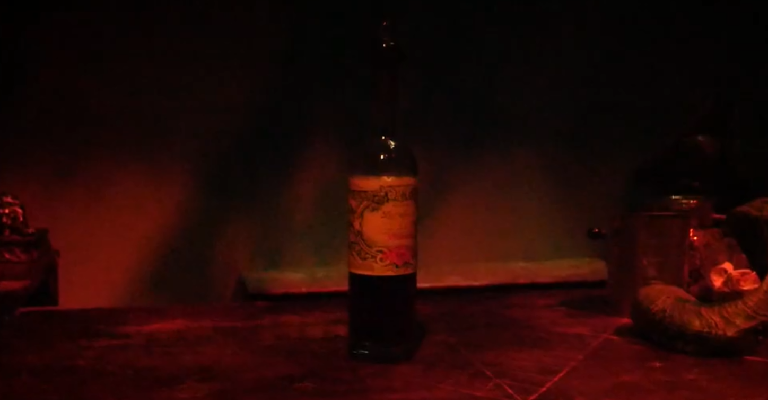 My favorite offering from Lost Spirits Distillery is not any single spirit; it’s actually a blend. It’s an alchemical mix of equal parts art and science, of humor and dedication. It has notes of heartfelt pastiche, fantastic optimism, and a strong sense of the explorer’s brand of bravery. It would pair best with a sense of curious wonder and a good friend. Drink this particular concoction in big gulps and wild abandon. Life is better that way.