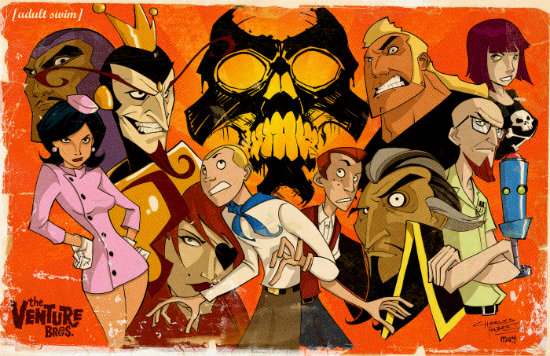 The Venture Bros follow the lives and adventures of the Venture family which consists of Dr. Venture who used to be a boy adventurer as a child but will never live up to his adventurer father and who is now a underachieving super-scientist, his kids which are well-meaning but incompetent teenagers Hank and Dean Venture, the family’s self-proclaimed arch-nemesis, The Monarch, a butterfly-themed super-villain, and a slew of amazing characters and story-lines that you just have to watch to understand.

We sat down with Co-Creator/Executive Producer/Writer/Voice Actor Jackson Publick and got to ask all the important questions about past and future storylines. Go team Venture!

Question: The Venture Bros are a super reflection of fandoms, are we going to see anything about how toxic modern cultures have gotten?

Jackson Publick (Co-Creator): Not this season. We wrote this crap a year and a half ago. That’s an ugly business. I am sure we will if we get into our geekier moments. We’ve talked about some gags for season 8, so we might skirt some of that, but any time I’ve gone into a script trying to send a message, I suck at it. It makes for bad comedy, so I don’t know we’ll see.

Question: Who are some of the most fun characters you like to voice, and are there any fun characters in the next season that you are really excited about?

Jackson: The Monarch is the most fun. Weirdly, there are so many that we just slip into in conversation, Doc and I talk to each other in character, whether we are writing for that character at that moment or not. Sgt. Hatred is a go to voice. They all reflect certain things you are trying to say, that maybe you are uncomfortable saying, so you say it in a character voice. Or something that sounds kinda stupid, so you say it in 24’s voice. They come up all the time. They are all fun to do. I don’t think I did any new exciting voices, but we got Hal Lublin to do more stuff, James Adomian came in and did a couple new characters. Mark Hamill came in and did a couple voices, in the same episode, that couldn’t have been more different.

Question: How do you think Dr. Venture would feel about a reboot of Rusty Venture within the world of The Venture Bros?

Jackson: I should write that down! He would call people all the time trying to get that to happen. Like, “What’s happening with the reboot?” He was trying to get a Broadway show made. “Hamilton was huge! Do you see what I mean, there’s a market for this!” He would love it, and have notes.

Question: You also helped in the creation of Super Jail, which is also one of my favorite shows…

Jackson: I helped in the end of the first season, I don’t want to take credit away from others.

Question: You’ve helped in a lot of shows but do you see any cross overs in these shows? I could see the characters being involved in each other’s worlds.

Jackson: No. I think they are very different shows. We don’t really think about doing crossovers. A long time ago we talked about crossing over with Robot Chicken, because we were chummy with those guys, and we were like, “Oh (The Venture Bros.) have dolls now, we could use their dolls!” and we never quite worked something out. That was about the most we’d do. We’d feel icky about doing a cross over. Doc is more anti crossover then I am.

Question: When you design the show, do you have whole show arc in mind, or just make it as you go?

Jackson: A long time ago I had an end game, but now I don’t. Well it’s not gone, we wrote past it. We just instead keep getting excited about changing it each season. Not as much as Archer does, where they re-invent their genre, which is kinda interesting. At this point, it would be very interesting to put a bow on it. I’m more when we… or the audience decides that we don’t get to do this anymore, we probably will go out on a “Life goes on” mentality, instead of “Here it is, here is the big ending”.

Question: Did you feel that the show had gotten too spread out with too many characters, did you feel that you needed to get it back to basics or did the story lead you that way?

Jackson: Both. I did feel that we had done a couple seasons where we got tightly wound with a million characters. I personally didn’t like how it was way too easy to bring anybody into any episode. I wanted to say hey, we shouldn’t keep throwing our funny supporting characters in these moments, we should try to make Hank and Dean into the funny area. It was too easy to go anywhere. Season 3 was the first time we were like, oh it’s okay to do an episode that the Venture Bros. aren’t in. Everybody matters to the show. Anyone that’s gonna show up has to matter. So resetting in New York, was kind of a way to do that. Okay, if we want Dr. Orpheus in the show, we have to bring him in for a reason. We definitely wanted to get a lot of our favorite people back, but we just didn’t want to be lazy about it.

Question: What’s the shape of the season, who’s going to be the big bad?

Jackson: The resolution of the Blue Morpho means what is the Monarch going to be. So that’s kind of a big thing. The boys going on their separate paths is going on. Dr. Venture has his friends to mess around with, and the boys aren’t really around. He should have other things to gripe about. The Monarch stuff is a big thing. I don’t know if you saw the first couple of episodes. God help you there is a cliff hanger in both of them, and I was just finishing editing the third one this week. It’s kind of a three part-er. It’s kind of a big story that unnecessarily goes to places you never expected it to.

Question: What’s an obscure character or story-line from earlier on that you want to bring back, or are bringing back?

Jackson: Good lord, this three part arc, touches on stuff from the very first two episodes, two seasons ago, for a long time fan there are tons of call backs to many little things. Weirdly a lot from season one.

Question: There has been a lot of breaks between the seasons. Have you ever received fan feedback in those times, and changed course?

Jackson: Yeah, don’t want to give specifics, but once or twice there were cliffhangers, and someone guessed it. Then we couldn’t do it.

Question: In the early beginnings in 2006, I heard a quote that the overall picture and theme was “failure”. Then in 2013 it was discussed to move away from this theme and focus on “successes”.

Question: Can you talk about this transition from them to now, and are there new themes that are coming up that we can look forward to?

Jackson: It’s still about failure, but the beauty of failure. That everybody is flawed. We have these very flawed characters. That’s always going to be a theme. We wanted to give them a couple of wins, and we certainly have embraced legitimate emotion over the years. I think early on if we wanted something sappy, we made a joke about it being sappy instead of going into it. Season three, lets go for this. Let’s see if we can make the audience cry. Themes going forward this season? Everyone is trying to find their identity. We are still dealing with the fallout and development of what happened in the prior season. Everyone is falling into their places. Identity is a big one. Finding your drives, has always been a thing with the Monarch. There has always been a purity to him, he has never played by the rules of The Guild democracy, which makes him the truest.

Question: Is there anything that you put in the show, that you were surprised that you got in, or where able to get away with?

Jackson: It’s so hard, because I’ve been so focused editing the last few episodes. It’s weird to think that far back. It happens less so now then it used to. That made me so worried, because we weren’t being edgy enough. We used to get a lot of, no you aren’t allowed to do that on TV. There is one episode this season, but I knew it when I wrote it, that it was part of the joke. There is a lot of nudity in it. So when I get back to LA, we are going to be putting a lot of black bars over 60 shots.

Question: When you were putting together the art book, did any lost character ideas or content come up?

Jackson: Yeah! I sent them a huge box of all my dreams and lose notes from over the years. Every so often, when first doing the layout, they’d ask if I’d write copy for this thing and I would go “Hey, don’t use that one. That’s an idea that’s been on the back burner for three seasons. I think we’ll get to it this season, but I don’t know. Don’t use it!”

Question: As far as music in the show, is there anything special in this season.

Jackson: J.G. Thirlwell keeps being our amazing composer and he has done a great job as always. We don’t do a ton of other music stuff. I am actually in the middle of a problem because we did a song and the legal department thinks it sounds to much like an existing song, and we have to change it. I got a bit pissed off because we’ve done the episode and the dude is in Canada now. We did the song “Street Life” from the Sharkies Machine soundtrack, has a big presence in the first couple of episodes.

Question: Speaking of snags, has there been anything this season, where you wished something hadn’t happened?

Jackson: Everybody works really hard to make sure this works, and I make their jobs harder. More of the successes stand out to me. The episodes look very, very good. Sometimes the animation comes back from overseas and looks bad, but that’s the C-Team, and you do what you can about it. It’s the nature of this very labor intensive process.

Question: It’s called The Venture Bros., but for the most part it’s been a very male centric show, which isn’t a criticism, but there has been more women characters as the show goes on. Do we meet any new women characters in the new seasons?

Jackson: Yeah, our newest female character will be Sirena, she is still around. Her and Hank are dating. We love Cristin Milioti, who plays her, so much. I wish I could keep all of her improvisational ranting in the show, but there is no time. She is always hysterical, I’ll give her a little idea “Oh when you are reading this line, you hate your bodyguard,” and she’ll just tear into Rocko, so she is so much fun. She did some other voices for us. There are a couple other characters but not hugely prominent. She did the voices for all of them.