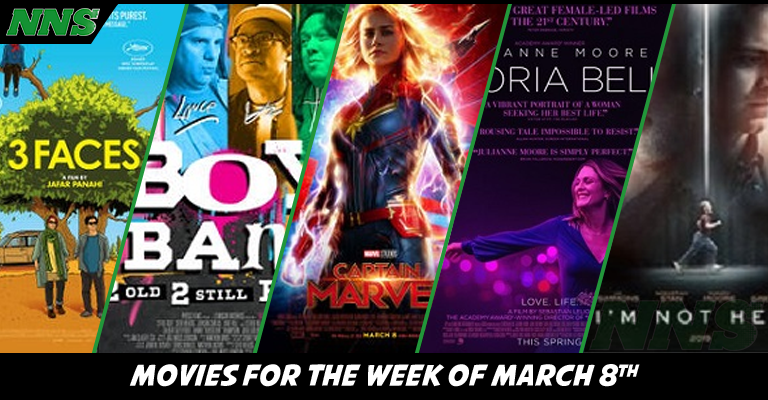 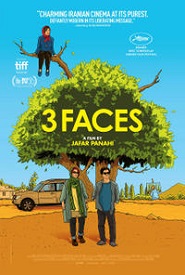 3 Faces – Releasing 03/08/19
Rotten Tomatoes Reviewer Score – 95%
An actress Behnaz Jafari, abandons acting for a more important task of helping a girl who is being prevented from going to school by her family. She turns to a filmmaker named Jafar Panahi for help, but finds a set back with regards to the girl’s communities traditions.

This movie is pretty important. Living in the USA, we are very lucky to have a specific experience in life. This movie gives us a different prospective and understanding of the trials and tribulations that other people around the world are going through. 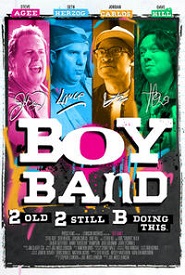 Boy Band – Releasing 03/08/19
Rotten Tomatoes Reviewer Score – (None Available Yet)
The Heartthrob Boyz were a hit. Loved by many, and considered washed up by modern standards. The band find that they are out of time. They are poor, and in need of a little success to pick themselves up. They decide it’s time to return and finish the album that they didn’t years prior. 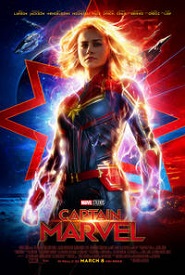 Captain Marvel – Releasing 03/08/19
Rotten Tomatoes Reviewer Score – (None Available Yet)
Carol Danvers is an air force pilot, who becomes embroiled into a galactic war between two alien races. Eventually the war makes it’s way to earth, and Carol will have to enlist the help of Shield to understand what has happened, and what is going on, as she struggles to make sense of her space life, and the life she had forgotten on Earth.

Who the hell are we kidding? You are going to see this movie. If you have any interest in seeing End Game in April, you are going to have to. Still though, it’s nice to see a female driven movie with more attention and time given to them. Also, is it time to start romanticizing the 90’s? Are we done being obsessed with the 80’s? When are horrible jean jackets and bright multi-color shirts coming back? 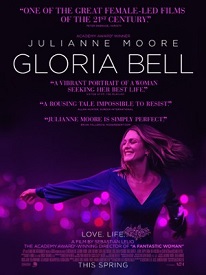 Gloria Bell – Releasing 03/08/19
Rotten Tomatoes Reviewer Score – 100%
Gloria has a new life in front of her, having gone through a divorce, she now lives a dual life. She works during the day, an office job, but at night she lets herself loose about Los Angeles. Going from club to club, dancing about the city. She is enjoying her life when she meets Arnold, and much to her surprise they fall in love. The movie shows the difficulties and differences in starting to date, after already having been married, and then divorced.

Julianne Moore portrays Gloria, and John Turturro portrays Arnold. They are amazing, and does a great job showcasing the duality of dating in a second round of life. Julianne more always shines. If you have gone through late in life dating, or second life (after a divorce) dating, this movie will connect a little more then a young persons opinion of dating. 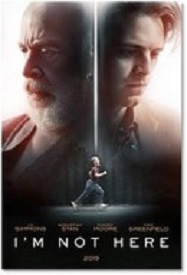 I’m Not Here – Releasing 03/08/19
Rotten Tomatoes Reviewer Score – (None Available Yet)
Steve is late in his life. As he spends his day around his home, he is constantly reminded of his life, as it torments him, the viewer is taken through his past in a series of flashbacks. The movie uses this medium to take you through Steve’s life, from a child dealing with his parent’s divorce, to a young Steve falling in love, Steve building a family, having his own son, and his life falling apart. What has he learned, why is he alone, these are all learned through his journey.

This movie is haunting and beautiful. It tugs on all of the heart strings, and makes you feel in a deep way. That being said, the acting is amazing, and fields talent from the impressive J.K. Simmons, Sebastian Stan, and Iain Armitage from the Young Sheldon, Big Bang Theory spin-off.