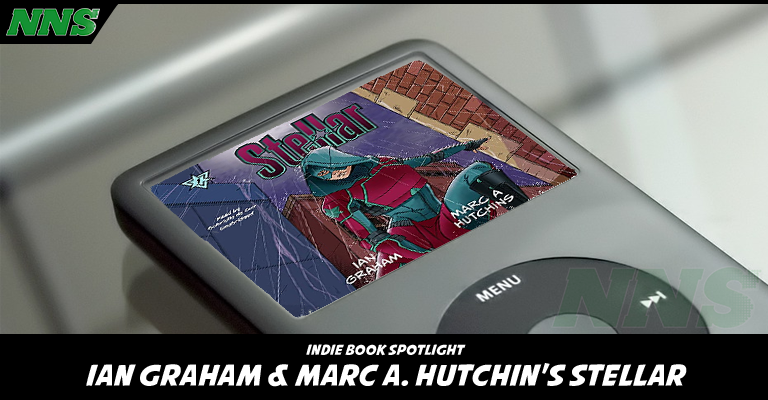 Hey, Readers! Welcome back to Nerd News Social’s monthly Book Spotlight. As we in the Northern Hemisphere are headed into Spring, I figured it was about time to find another excuse to stay indoors and away from all that pollen, so, here’s a new read for your inside time. (Or outside time if you prefer. Great thing about books, you can read them literally anywhere.)

This month we have a superhero novel by the name of Stellar to plunge into. As someone who loves Indie level superhero antics (Heck, I’ve collaboratively dabbled in a little bit of it Myself with the super talented folks here at NNS.) I was keen to snag this title and see what this cowled vigilante had up her sleeve to keep me entertained!

So, clasp on that cape, strap on that mask, and get ready for some street-level heroics with Macy Davis and… oops, did I just ruin her secret identity? Sorry, Stellar.

Basic Premise
Macy Davis is a regular 9th-grade girl. She has her best friend, Keri. She has her terrible teacher, Mrs. Spader (Also known as The Spade.) and she has her classmate crush, Patrick Newel. All in all, she’s just like anyone else.

Well. Maybe not. Her grandpa has been training her ever since she was super young. He was in the military and wants to make sure Macy has a solid knowledge of self-defense. She does have a couple of black belts under her… well. Belt. So, maybe she’s a little more than average.

Despite her fairly normal life, her city is a little less normal. There’s a missing girl from her school that no-one’s been able to track down. And a new street drug called Spaz that sends people into a blind rage. (Surprising, right? With a name like that, who would have guessed!?) Could these two things be connected? (Probably.)

Anyway, back to Macy’s crush; he’s an artist. He draws regularly in class, and during one of these un-sanctioned drawing sprees, he happens to drop one of his pictures. It’s of a hooded female superhero by the name of Stellar. Macy happens to snag it for him before The Spade spots the dropped drawing, but she doesn’t quite manage to get the pic back to Patrick in a timely manner. Which kind of works out because the aforementioned bestie, Keri, suggests that for the Halloween dance, Macy dress up as Patrick’s creation! Keri is a skilled seamstress and it wouldn’t be much at all for her to whip up a Stellar costume based on this picture to wow the boy of Macy’s day-dreams. What could possibly go wrong!?

See, Patrick isn’t just an artist. He’s a bit of a sleuth as well. During the hubbub of the Halloween dance, he and his two buddies have sneaked into the Library to do some research on the missing girl I mentioned earlier. See, he has some hunches and it seems like no-one is willing to take him seriously. Only, that’s not entirely true – someone is taking his questions VERY seriously. Seriously enough to enlist the school’s biggest bullies to beat the curiosity out of him.

That is, until they cross paths with Stellar!

Using her training, she makes quick work of these thugs, rescues Patrick, and saves the day! All on camera, as well. Suddenly, this masked vigilante is the talk of the school, her video having gone viral.

But who doesn’t want Patrick asking questions? And why on earth would whoever that is use schoolyard heavies to do their dirty work instead of full gown enforcers? How does this tie into Spaz? And what happened in this city decades ago that ties all these elements together?

You have to read it to find out!

Stellar is a great story. Macy’s personality is instantly likable and relatable as are her interactions with her fellow schoolmates – it honestly took me back to a time when drawing in class was the ultimate subversion and saying “Hi” to your crush was enough to make or break your entire day depending on their reaction to it. The setup feels authentic. The kids generally act like kids and the dynamic between them all is refreshingly simple and accurate.

As a superhero story, it’s also solid. This is street-level, vigilante crime-fighting. Caped crusader vs crime boss but with no superpowers beyond exceptional martial arts ability and drug-induced frenzy on the part of the bad guys. There’s a death trap scene in there, but even that is believable and not… y’know. Someone being dangled over a pit full of acid or anything. And this is all coming from someone who LOVES goofy, campy superhero stuff! It’s all such a blast while remaining super grounded and realistic within the confines of its universe.

The writing is nice with solid prose and really enjoyable characters.

The narration, also, is really great. Gabrielle De Cuir does a wonderful job of keeping everyone’s voices separate and authentic. If you like audiobooks in general, she’s done a range of them along with this one; I recommend looking up some of her stuff.

All in all, a heartily recommended read from me!