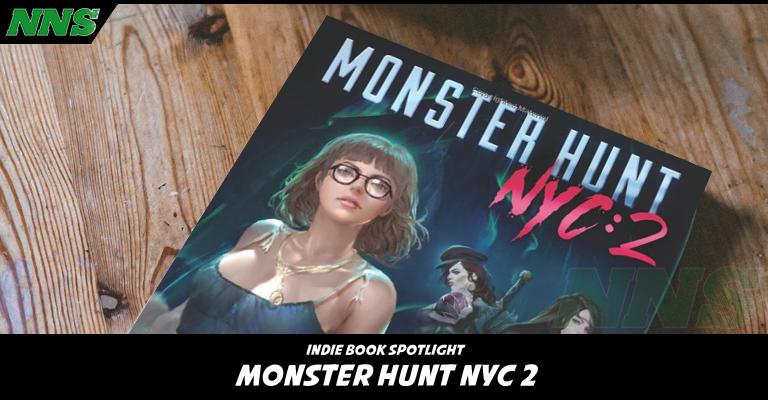 Greetings, Readers! Today we’re going to be talking about the sequel to Harmon Cooper’s Monster Hunt NYC book. You can find my review of the first one Here. Since my review of it, it has also made its way to Audible! In my interview with Harmon, he said that this series was always intended for audio dramatization, and I can confirm it works well. The final product is slick, with great production values. I highly recommend it.

Serialized storytelling is relatively commonplace in the indie space. There are so many books that come in a series format that it can sometimes be a little confusing as to which you need to start with. (Mr. Cooper has relieved us of this level of stress by simply numbering the Monster Hunt NYC books.) And I think there’s a conversation that needs to be had around this phenomenon. Is the one-off book a thing of the past? Is the Great American Novel destined to become the Great American Novels? Think about the last time you were browsing new offerings on Kindle Unlimited and saw a book that was clearly designed as a one-off, singular, beginning to end experience. Unless it’s a biography or some other non-fictional genre, I can’t think of many.

Personally, I think it has to do with the current culture of movie franchises and TV series binge watching. We’re products of this environment and it’s not surprising to see it filter down into books as well. Not to say that books in a series or with multiple sequels are NEW. Heavens no. You only have to look as far as Harry Potter to see that, and a little (Or a lot.) farther back to Lord of the Rings to confirm it. But maybe it’s a little more commonplace than even a decade or two ago. I’m also not saying it’s BAD. Again, not at all! It’s just something I notice as someone who reads for both fun and work.

And this brings us to the second installment of the Monster Hunting adventures of one Chase Knowles.

So, power up that Kindle and prepare to be dropped back into the Proxima Galaxy and good ol’ New York as we make some new friends and a few new enemies to boot.

(This probably goes without saying, but being as this review focuses on book number two, some spoilers for book number one are inevitable. If you haven’t yet read the first in the series, go ahead and do that first. I’ll wait.)

Author: Harmon Cooper
Formats: Kindle, Paperback
Price: Free via Kindle Unlimited, $4.99 otherwise. $13.99 for the paperback.
Length: 426 pages
Number of books in the series: At the time of writing, three.

We pick up almost exactly where the first book left off. The first major tourney win Chase has ever had in his, admittedly short, Monster Hunt career has the team in high spirits. The cash prize doesn’t hurt, either. Aya Duchig, the half-dragon warrior woman and Lady Cassandra, the mighty Metican spellcaster, are going to get the cabins that Chase promised them upon first getting them a Dojo in Everlife. Plus, their other monsters (Or Mythcrea, as they’re called) will have their living quarters upgraded as well.

With this done, they go out hunting and make some new friends. Chase and his partner Iris use music as well as battling to bring new creatures into the fold. They can be kept to raise the party level, or sold for Proxima dollars, which can then be converted into real-world currency. The only reason Chase started with this App in the beginning was to buy new instruments for himself and Iris in the real world.

But it’s become so much more to him than a quick cash-grab by this time.

In fact, Chase and Iris both wind up buying new instruments to be used in Everlife. A bass guitar for him and a ukulele for her. They also meet a Shadowy figure, Dalton, who seems to have just the right connections for them to get to play those instruments at a research hub slash nightclub by the name of The Midnight Library. (Not even going to lie, this sounds like a place I would spend a lot of time.)

On the relationship front, Chase still has feelings for Iris. But also for Lady C., who he goes considerably further with. In this universe, relationships between real and A.I. beings are perfectly legal and even somewhat normalized, so, this may not be considered as odd as you’d think. Aya and Lady C. have their own personalities, wants and goals as A.I. in the 2090s has gone beyond anything we can imagine with our current level of tech.

He’s playing both sides at this time and I can only expect it’s going to bite him in the ass at some point. But this isn’t that story.

It’s this level of feeling that causes Chase to make a brand new enemy as another Alpha decides to slap Lacy C. on the backside in passing.

There’s also the Secret of Everlife to figure out – a huge, glowing tower in between all the kingdoms of this realm that no-one has ever been able to enter. And, not only that, but there’s another tournament on the horizon, but this one comes with a twist: Alphas are required to pick up arms and participate, too! If you die in Everlife, you simply return intact with the damage healed…. but you still feel the pain of your demise.

How does this all come together? Read it to find out!

So, I did find this book pretty enjoyable once it got going. I’ll say it definitely feels like a middle entry in a story, which it of course is. Some stuff is set up that we won’t see pay off until, presumably, the third book. The first portion of this book, though, feels a little meandering with a lot of new stuff to be learned about the Proxima Galaxy and Everlife. The political situations of various Kingdoms, in particular, plays a pretty big role. This all feels interesting and never crosses over into being dry or cumbersome, thankfully.

When the Alpha Duo of Chase and Iris get to hunting, that’s where this book shines brightly. It’s always interesting and amusing to find out which mythical creature is around the next bend. From rhino-unicorn beasts to Phantom Kangaroos who used to be Dragons to goblins who aren’t allowed to swear but so, so desperately want to, we run a pretty wide gamut in this book. There are familiar faces from the last entry as well – Sun Wukong and Fujin are standouts, but Rose the Bearadillo and her cub are always a welcome set to read about. Considering it was a while since I last read the first book in this series, it felt a little like coming back to friends I haven’t seen in a while.

This book is light GameLit, which means that it does involve some tables and numbers, but never anything that requires too much attention. There are stat screens that provide interesting information on the monsters and Alphas that we encounter so you get a little more insight into the world… but if you can’t recall the stats of any given Mythcrea, it isn’t like you’re going to feel lost.

All in all, it’s a fun ride that kept me reading and I have pretty high expectations for the third book!