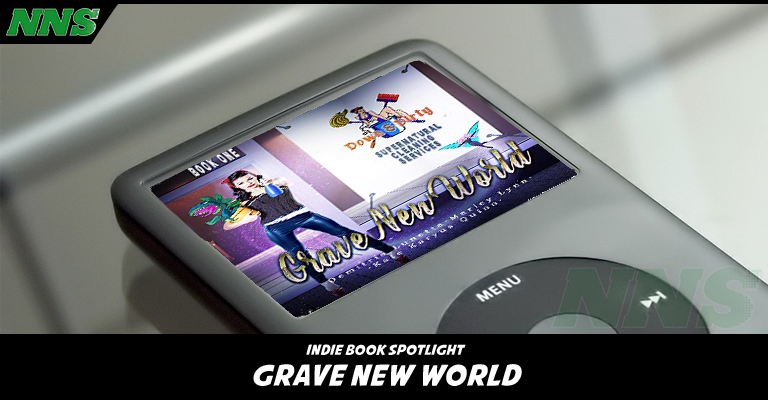 Initially, my plan was to review this for October’s Spooky Spotlight. Unfortunately, I wasn’t able to finish Malefactor in time to have it feature in September so I’m dropping this one early. I might do a special feature on that one partway through the month and find another supernaturally squeam-inducing tale for October. We’ll see how things shake out!

Cleaning. Love it or hate it, there’s no getting around the fact that it’s super necessary. Some folks do it themselves and some folks outsource, but most of us don’t feel quite right unless our space is at least somewhat tidy.

This month’s book centers around a cleaning service like no other, and that’s the hook that drew me in. Supernatural cleaning service? Heck yeah! In a world populated not only by regular folks but vampires, werewolves, changelings… oh the messes that must be encountered by those who do the hard work of cleaning up after others.

This book centers around Paige Harper and her one-woman operation that works in this very arena.

So! Grab a rag and some Windex, roll up your sleeves, and let’s get to work.

Author: Kate Karyus Quinn, Demitria Lunetta and Marley Lynn
Formats: Paperback, Kindle and audio book.
Price: Paperback for $12.99, Kindle for $2.99 (Or free with Kindle Unlimited), and $17.99 on Audible (or One Credit).
Length: 210 pages or 6 hours 11 minutes in audio format.
Narrator: Carrie Coello.
Number of books in the series: 7 at the time of writing.

We meet Paige as she’s driving to the site of a Vampire rave. There was a shark involved and this is probably going to be an all-day kind of a mess. We learn a little about her and her world; if I hadn’t made it clear yet, this is a world where the mundane and the fantastical have collided in a big way. Supernatural creatures of all kinds made themselves known some time back and have worked themselves into society at every level, for better and definitely for worse in some cases. There was also a mass disappearance event sometime in the recent past called The Ghosting. Was it the Rapture? Thanos Snap? We don’t know. What we do find out is that it blipped Paige’s parents and the prevailing theory is that the Supes had something to do with it. So, Paige’s views on Supes are…. honestly? Kind of racist!

This is despite the fact that she has a possessed or otherwise enchanted, a self-driving van called Vannah and a definitely not even remotely normal Venus flytrap. (It doesn’t sing, but I bet it could hum a few bars. Feed me, Seymour…)

Anyway, she’s back at her office when a new client walks in. He’s got a house for her to clean and the pay is good. (It comes with a retainer made up of a couple of big, fat steaks.) Sounds great, right? She takes the job.

This is when we meet her ex-husband, Jax. He’s a Fae, though, Paige didn’t know that when she married him. She lives in a house that they lived in together while still a couple. Despite his name being on the deed, she considers it her house. And to be fair, Jax is a jerk. He cheated on Paige which was what caused the divorce. And he’s put the house up as collateral in a high-stakes, Supes-only Poker game. He also got Paige a housemate she never asked for by the name of Darron, though he honestly is the nicest character in this whole book so, despite her reservations, Paige’s worries are unfounded when it comes to Them. (Darren also identifies as a lady named Daphne on occasion and is equally well treated in both personas which is really refreshing.)

We also get to learn about Paige’s current boyfriend who is a local politician and also pretty racist.

Anyway, after we find out a bit more about this world, Paige starts her new job cleaning this house.

Or she would… if she didn’t go inside just to find her ex-husband Jax crouching over a dead and very bloody vampire while holding a bloodied knife.

Thus starts our adventure proper. She basically has to get Jax freed and out of jail before the Poker game so he can be sure to win back her house. She enlists the help of a werewolf private eye (With one eye!) named Nico, Jax’s sister who is a beauty addicted Pixie (Beauty is like a drug to pixies. They literally get high by being around beautiful people. And on a related topic, those steaks I mentioned before? Unicorn steaks. They taste like straight sugar which is also something that pixies love.) and Darron/Daphne to help her unravel this murder mystery.

Does she manage to do it? Does she keep her sanity throughout all these supernatural shenanigans? Does she overcome her reservations about Supes and do something she’ll regret with the hot werewolf? You’ll have to read to find out!

I loved the premise of this book. As someone who likes cleaning, I thought the idea of a cleaning service in a world filled with supernatural critters would be incredible. We spend very little time on that concept, though – it’s more of a device to explain why Paige is at the center of certain other events, namely murder mysteries. (Look. My favorite TV show of all time is Monk; literally a murder mystery show with someone who cleans obsessively as the main character. I watch the series through at least once a year, much to my poor Wife’s chagrin.) So. More murder, less lemon pledge.

Paige is a complicated and messy character. I never exactly clicked with her. My assumption is that, as this is the first in a series, she grows and changes, and by the end of her story, she’s going to be more together. She’s sometimes violent for little reason, she treats people who are trying to help her or are otherwise caught up in her orbit kind of poorly. She has her reasons and lord knows reading about perfect people would be very boring, but I often found myself shaking my head and wondering why she did and/or said something or other and that took me out of the otherwise pretty nicely crafted narrative somewhat. Her prejudice against Supes, especially, got a little grating at times. (Her love of puns, though? Chef’s kiss.)

The supporting cast is, overall, nice though. Heck, I’d read more of these books just to catch up with what Nico and Darron/Daphne are up to.

The writing itself is good, and despite what I’ve said about Paige I cannot say that her narration isn’t entertaining! In fact, a few parts had me laughing out loud.

The story is a little raunchy, a little naughty, but never crosses over into anything really graphic. Still, not a recommended read for younger readers.

The world-building is actually really smooth. Paige’s perspective gives us plenty of insight as to how this world works and some of the things that make it unique. The aforementioned beauty-drug correlation being one example. The fact that in this world, red meat is hard to come by. The vamp straw parties are a fun addition, too, as are their particular reaction to being given blood thinners. The anti-Supe, Humans First stuff was honestly on the nose for the current political climate and I think that’s where some of my discomfort came from in trying to relate to Paige. But the LGBTQ+ positivity in this book, as mentioned in relation to Darron/Daphne, was lovely!

I am reviewing the Audible version and Carrie Coello does a really nice job with the narration. Her reading for Jax especially made me chuckle. (It actually reminded me a little of Patch in Rule of Cool, read by Felicia Day. I think Jax and Patch would be Bros.)

In short, Grave New World: Down and Dirty Supernatural Cleaning Services, Book 1 is an interesting read and worth a look if you’re in the mood for something more saucy than scary.