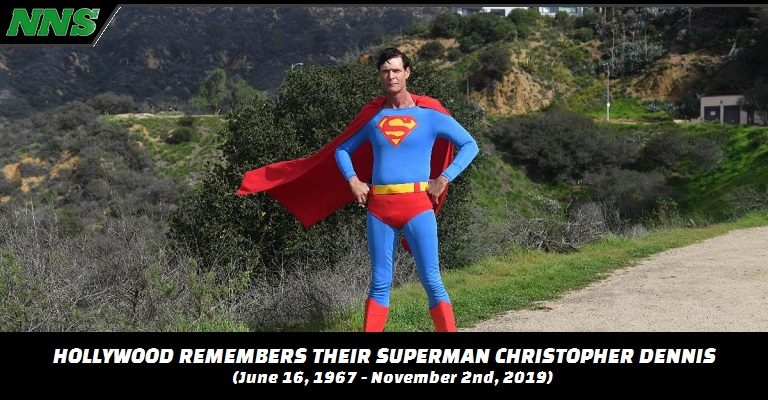 Today, Saturday, December 7th, 2019 at 12:00 p.m. an open funeral service will be held at the Old North Church at the Hollywood Hills Forest Lawn for the Superman of Hollywood Boulevard.

Christopher Dennis did not have an easy life. He was put up for adoption by his father when he was 6, and spent most of his life in shelters and group homes. However at the age of 18 he decided to chase his dreams of becoming famous. He headed out to Los Angeles, and while living and working waiting tables, he was constantly told how much he looked like Christopher Reeve. It was around 1991, that Dennis was reborn in Hollywood where he spent over 25 years delighting tourists, and children as he portrayed an icon that was more then just a comic book character to him. He was quickly dubed the Hollywood Boulevard Superman, as his likeness to Christopher Reeve was stunning, but made more so by his awesome costume.

He was actually the first costumed actor to walk the streets of Hollywood Boulevard, starting a trend that continues to live on today.

Tough times fell on Christopher Dennis, in 2016 when Dennis became homeless as a result of betrayel, depression, and substance abuse. He was lost, without his costume, and with no way to get back on his feet. He however did have the support of his long time friend Vlad Kozlov, and wife Bonnie Finkenthal Dennis. In the end though, his depression, homelessness, and the difficulty of his on and off homelessness claimed his life.

In spite of all that tragedy, though, with the love of the people who he touched, and the aid of a mysterious benefactor who refused to steal the spotlight from Dennis, Christopher Dennis is being brought back to Hollywood finally, and re-united with his soul-bound costume. As was his wish, he will be buried in his costume, as it has become so much of a part of him.

My first experience with Christopher Dennis, was in the Music Video/Documentary from Thirty Seconds To Mars, called “City Of Angels“. His beautiful and stunningly honest words within the video were heart warming, and made you feel connected to him in a deep and heartfelt way.

I’ve attached the music video here, but there is one thing that I ask of you, if in watching this video you felt connected to him, in how you’ve felt while living in Los Angeles, then please feel free to donate to his funeral service GoFundMe, Here.