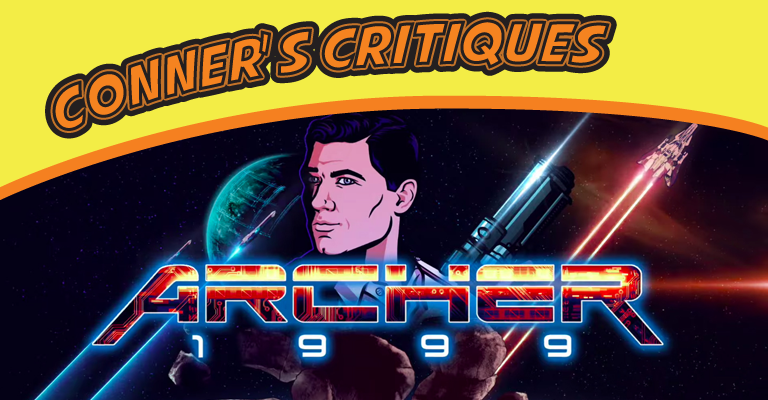 One of the best adult animated shows that is currently running is Archer. The show started off strong, with playing on an American version of a commercialized James Bond. As the show progressed further, they cut themselves free from the spy angle as they started to deconstruct their own show into different genres. They became drug runners, a private detective agency, and then when Archer entered into a coma, it even got more confusing.

In the coma series the show devolved into a noir theme, an adventure island motif, and finally a sci-fi action show. We are going to talk specifically about the current session as it just ended. As always we break down the critiques of the three categories: Story, Acting, and Overall. So let’s dive in head first. Phrasing. Also warning Spoiler WarningSTORY: 7/10
I will be honest, the story line for this season was not very amazing. It was fun, but the show has become a reflection of itself. They took advantage of the theme changes by having all the enemies and stories repeat themselves within allegories of their current theme.

The show is still Archer, and the dialog is top notch. The reason that the show was able to recover their story is how the show’s season for Archer 1999 finally ended. The issue that started to push a lot of people from the show was the fact that three seasons ago they at least made reference to the coma at least in the noir story. In the second coma season in adventure island, they didn’t even mention the coma. People were worried that they were going to ignore the coma and just continue random stories moving forward. Archer 1999 seemed like proof of this. Archer 1999 however flipped that concept in the final episodes when the real world literally ripped a hole in the final story they were telling.

The willingness to bait the audience with a mcguffin, and then pull it out of their hands to give them what they really wanted out of no where. The final moments of the show was equal parts heart warming, and creepy.

ACTING: 10/10
It’s hard to talk about acting with a animated feature. Voice actors are hard workers, and are amazing at their job, but acting is partly voice, and part facial expressions. So part of this rating is how the animators did their job bringing the characters to life. The people at Floyd County Productions are amazing at crafting these characters. With regards to the voice actors: H. Jon Benjamin, Judy Greer, Amber Nash, Chris Parnell, Aisha Tyler, Jessica Walter, Adam Reed, and Lucky Yates have always done a great job delivering a ridiculous script.

OVERALL: 7/10
The ending of the three season coma run makes our journey through the last three seasons worthwhile. If They hadn’t concluded the season with the end of the coma run, it would have probably been the last season that we would have watched. The sad fact is the start of the season being so repetitive still hurt this show lowering it to our rating of 7.

Conner’s Final Thought(s):
We are very excited for the next season and can’t wait to see what has happened to our favorite characters over the course of the years that we were watching Archer be in a coma.