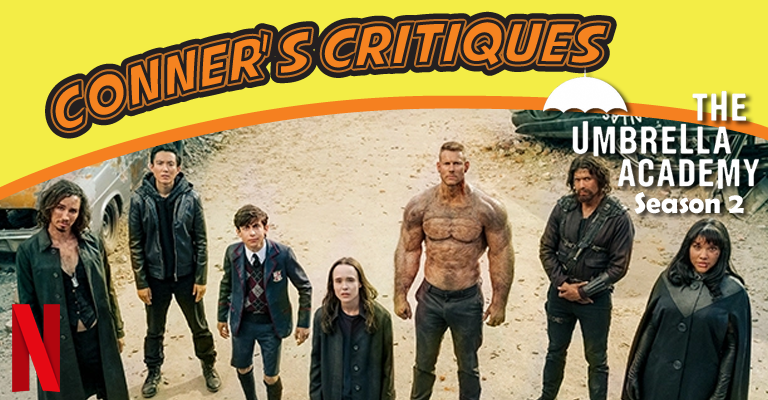 The second season of the Umbrella Academy dropped not that far ago, and we are back to showcase how we might also be one of the 43 children born in the 80s, but with the boring power of delivering critiques of other’s works. We worked really hard with this review to avoid Spoilers, namely because we were afraid Diego would knife us if we ruined any of this season for you, and have you seen Luther’s arms?! If you haven’t read my critique for the first season, you can find that Here

STORY: 10/10
Without giving away to much, it’s easy to say from the trailers, that the adoptive siblings of the Umbrella Academy have been spread out in the 1960s, each causing relationships, friendships, damage, and ripples to the timeline. When all the ripples come to head, it leads to once again, the end of the world as the Soviets launch nuclear missiles on the United States.

I don’t want to give away secrets, and spoilers, but their actions through the season can easily have changed our actual world to lead to the effects that occur at the end of the season.

What happens to the characters, how they are found, and what they found in themselves is not only heartfelt, but understandable as much that it is a study into the humanity, and the cause and effects of the world around them. Also they have super powers.

It’s really hard to go more into depth about the story of the season, as all of it would lead specifically into dangerous story territory.

ACTING: 9/10
The actors showcase some very interesting situations this season. As one is thrust into the civil rights era, one has to learn who they really are, one has everything taken from them, one’s complexes keeps them isolated from the rest, one believes himself better then the rest, one is dead, and one stares right into the face of a tragic event in their life that they just can’t seem to correct.

Each acts their part perfectly, and the person who stands out the most in this season might very well be both Aidan Gallagher, who plays Number 5, and Emmy Raver-Lampman who plays Allison (Number 3). Not only does Aidan run the show, just like last season, drastically trying to get his family into gear to save the world, but he showcases once more that he, a child, has no problem portraying a 60+ time assassin.

Emmy gives a heartfelt presentation, and reminder, as she says in the series it self, that while there has been change in the future, the fight continues. Her feelings, as acted, and presented are as much true in this series as it is today. I know they had no way of knowing how important civil rights is today, as it was back then in Dallas not that long ago.

OVERALL: 9/10
Fans of super hero stories, comic books, and absurd humor have a show to entertain them through at least a small part of this pandemic. I only hope that they someone find a way to solve the Pandemic in the third season, as they find themselves in 2020. I also hope that when they do solve it, it’s something that we can solve, and not just something that they did.

If you are looking for a fun romp of insanity, and feel like the first season didn’t delve deep enough into the absurd, then this season is for you. The characters are awesome, the story is complex but not without understanding when the final shoe drops.

I will say that the second to final surprise, and the final surprise of the season was perfect and just enough to keep fans entertained, on the edge of their seat and also frustrated that they have to wait so very long for the next season of the Umbrella Academy.

Conner’s Final Thought(s):
This season of Umbrella Academy focused on the storyline of the second series of stories, named Dallas. In the books however it focuses on Diego finding out the horrible things that Number 5 did in the course as his live as a time assassin. If you are a fan of the comics, the works will not spoil the storyline of the season. However, if you finish watching the season, and want to watch a “different possible timeline” then you should definitely check out the comic book.

However, the amazing way it was portrayed in the second season was enjoyable and unique enough to be on the same course, but not specifically enough to ruin the surprises and twists in either.

The way they write the seasons really gives little nods to hardcore fans, but doesn’t leave the newbies out in the cold. If only more adaptations would take the same tact.