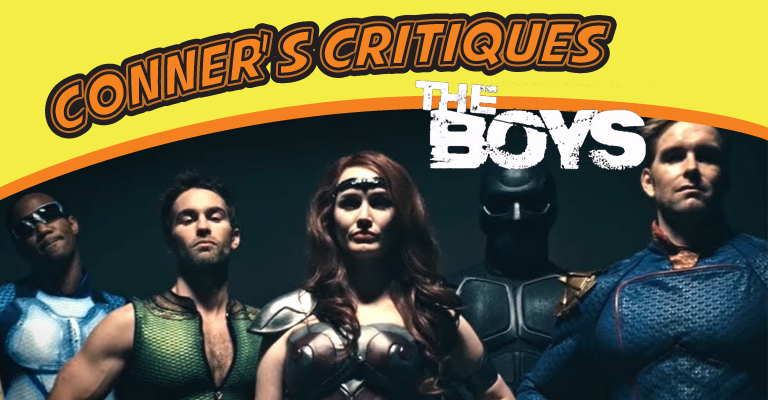 Thanks to Amazon Streaming, and San Diego Comic Con, we got a chance to sit down and watch “The Boys” first season, and as a result, I thought it’d be a good idea to write up a critique on it.

Fair warning, with the addition of a Spoiler Warning as well, I will say that while the show is very swear heavy, and ultra violent, I don’t think it does it justice to attempt to review the work, and keep the review to a PG rating, that being said, this review is rated NC-17. No minors allowed. Miners welcome. As always we break down the critiques of the three categories: Story, Acting, and Overall. So get bloody and show those supes the what for!

STORY: 6/10
Where to start. The story isn’t what I’d say original, or unique, but it is interesting.

The concept of superheroes are currently highly saturated in the industry. The idea of murderous superheroes have also existed in comic book form as well as in movie form with the likes of Mystery Men starring Janeane Garofalo and Ben Stiller; Kick-Ass starring Chloë Grace Moretz and Aaron Taylor-Johnson; Super starring Rainn Wilson and Ellen Page; and recently Brightburn starring Elizabeth Banks and Jackson A. Dunn.

The thing that at least makes this series shine though is it’s ability to be serious, dark, and bat shit insane all within a ten minute period. The comedy and violence is so well entangled that it would be impossible to sensor this show for a younger audience and still have a show.

ACTING: 6/10
While as Eric mentioned in his press conference breakdown, here, that the main character of Hughie Campbell was designed with Simon Pegg in mind, the performance of Jack Quaid was actually pretty amazing. He was able to portray the utter fuckery that was going on within his mind in the show. My only issue with his acting ability is that when Robin is murdered by A-Train (Warned you about spoilers, but come on, thats like the first ten minutes of the show), he seems to have a problem showcasing his complete befuddlement and terror at realizing that Robin is gone. That being said, it doesn’t distract to much from the work or the story.

With regards to Karl Urban, who plays Billy Butcher, he does a great job showcasing his rage throughout the series. However when it comes time to portay sorrow, or sadness, it actually falls short. I know Karl Urban can portray those emotions, so I wonder if it was a directors choice to withhold that from the character during scenes where it would likely fit.

Who stands out the most though, when it comes to acting? Well Frenchie, portrayed by Tomer Capon. The range, the curiosity that seems to be showcased by the character is one of my favorite things. He is introduced as if he is this angry revenge baring character, and while I should doc points for his immediate forgiveness of the debt owed, and the major shift in his character to being super supportive of everyone, I can’t because of how much fun his character is.

OVERALL: 6/10
Frankly, I want to give this show a much higher rating, I really do, but the show doesn’t really create a situation in which it stands out for it’s acting or story. The thing that stands out in this show though is the way they present the concept. I love everything from baby with laser eyes, to the attempt to rescue a dolphin from their worlds version of Seaworld.

This might be the first and only time I say this, the rating we gave this show, isn’t the rating that it deserves… but the rating it needs right now? Did I ruin that quote/moment?

Conner’s Final Thought(s):
Regardless of any shortcomings, or the rating of the review, this show is very fun to watch as long as you can handle adult subject matters, graphic violence, nudity, and seriously fucked up subject matters. The good news on top of it is that they are also releasing a second season as well.