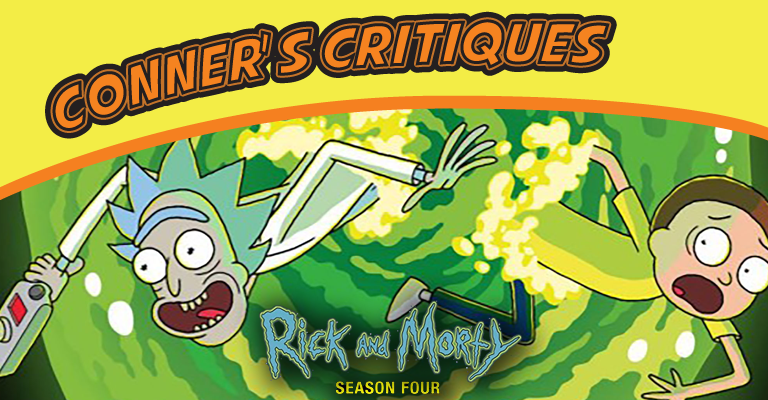 Rick and Morty have just finished it’s the fourth season, and what a season. There was so much fan baggage with this season before an episode even aired. The fact that there was an issue of the series not returning, contract negotiations, over a year of wait, and then the five-episode split and huge break pushed fans to the limit. That being said, in spite of the wait, and hype, the show delivered!

Fair warning, everything mentioned in canon to reality, so this review may spoil show elements, so fair warning Spoilers ahead.

While the first half of this season focuses a lot on character development, the thing I really want to focus on is the second half of the season.

The second half of the season is all about messing with the ideals of what fans wanted for the series. A way to tell fans that their theories are just theories and that the creators get to decide the fates of the characters. In the first return back, we are treated to the meta-non-canon train journey that peaks all fan’s interests and disappoints them that none of it will ever be canon. The next follow-up gives some really weird fans what they always wanted with Rick and Morty’s relationship.

A lot of here at NNS’s favorite episode though is “The Vat of Acid Episode”, a romp that once again places Morty back into his place in the relationship, while questioning fans concepts of what could or should be. If you loved this episode, can I suggest you also watch this short film as well, we found it after the episode and feel like it really hits down on the science behind this episode.

Completely against the expectations of the fans, the creators delved deep into the questions of Clone Beth, Phoenix Person, and the return of the Federation. Expectations were affected earlier in the first episode back “Never Ricking Morty”, where they showed that exact same concept. It made fans believe that it wasn’t an option for this season or moving forward. When they brought these issues all back in the finale, it really threw fans for a rollercoaster of a ride.

Acting is always a hard topic in an animated series, but we have always prior focused on the ability to emote emotion with just a voice.

In the first half of the season, we are treated to a depth of character development. From Morty trying to find happiness at all cost, regardless of anyone else. Then we are treated to Rick learning more about how alone he is then he has in almost any episode prior. (Exception being the end of “Auto Erotic Assimilation” in Season 2.) After all of that our next journey is to see how far Rick would go to keep Morty as his sidekick, that leads into the next story where it feels like all those prior stories are pushed into one with Morty’s desires being co-oped by Rick and literally coveted. In the final episodes of the first half of the season, Rick is a unifying episode where the family in part comes together, and Rick is placed back in a position of power, and Morty is placed back in his place and the dynamic is restored.

While the second half of the season was well played and amazing, there wasn’t a lot of character growth in it.

This season felt a lot like season three of Rick and Morty, not as simple as season one, but like there is a large overarching story throughout the whole season. Some episodes can feel like it’s in a vacuum, but the themes, the episodes all piece together to show you the state of mind of the characters building up to a conclusion of two major plot points from the prior season.

This season is a lot of fun, and for a true fan of Rick and Morty, it is everything you will want, while filling holes left over that we didn’t realize would be solved so soon!

While a lot of fans have taken some of the work as targeted at them, insulting, or jumped the shark, I looked at this as an amazing test of reasonable fans. If you disliked this season, if you felt called out by this season, then you may not be a fan of Rick and Morty. You are a fan of some of the negative things the characters do, that the show is trying to make fun of, that you’ve taken as them accepting you, and your flaws.

I can understand that it might feel like trespass to those people because they felt accepted for their flaws, but maybe this is a good opportunity for self-growth. Probably not though.