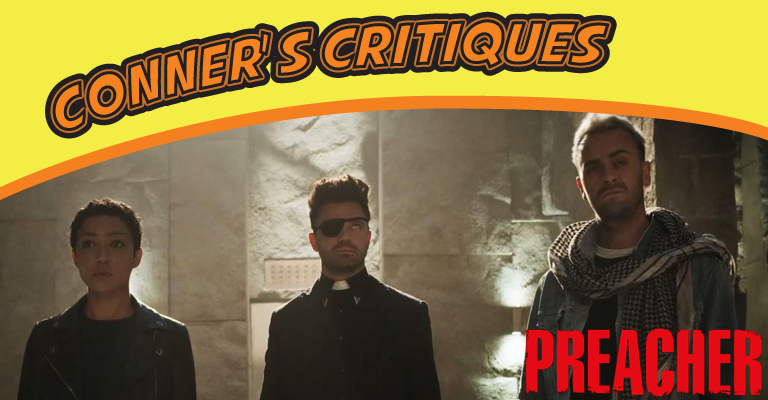 We held up for quite sometime, because we didn’t want to cause issues with spoilers. That being said, it’s been a bit, so lets jump into this review.

Back to our review though. Preacher just finished it’s fourth and final season, concluding the series in an amazing way on AMC. This show was produced by Evan Goldberg, Sam Catlin, and Seth Rogen, who loves to show off how much money he has, and how much of a comic book nerd he really is.

I will give you a warning though, as the show is over and we are delving deep into the content, this review has a heavy Spoiler Warning. If you haven’t seen the show, and didn’t want to have it ruined, then I highly recommend that you check out our “Non-Spoiler Version” which will be releasing tomorrow at 12:00 p.m. PST on our site..

As always we break down the critiques into three categories: Story, Acting, and Overall. So lets bring out the word of God and get Genesis all over this show!

STORY: 8/10 Conner’s Thoughts
The show starts off in the rural town of Annville, Texas, as a non-corporeal entity known as Genesis enters into the body of their not so simple preacher. The show then slowly builds up the characters, of Tulip O’Hare a psychotic but skilled criminal played by Ruth Negga, Cassidy a drug addicted Irish vampire played by Joseph Gilgun, and the star of the show Jesse Custer a run down preacher with a dark past played by Dominic Cooper. The series introduces them and starts showing how they interact with each other, and their world. While die hard fans of the comic book may not have been a fan of the slow start, I personally understood why they had to do this for the general television watching audience, and loved Jackie Earle Haley performance as the town matriach, Odin Quincannon.

Season two is closer to the actual form of the comic book, as the prior season ends with an angel, Fiore, pulling The Saint of Killers, played by Graham McTavish, out of hell to hunt down Jesse, and Jesse and his friends have hit the road looking for God. This season did a really job showcasing that the groups toughest enemy, might just be themselves. However, while the group struggles, the show introduces, at the time, frenemy Herr Starr, played by Pip Torrens, and his interesting religious organization, the Grail.

Season three focuses more on the ghosts of the past, as Jesse makes a deal with the devil he knows, who secretly makes a deal with the actual devil. Tulip’s death and return to the land of the living also gives her an introspective journey, that actually leads to her finding God on her own. However, it’s not time for the fated meeting between God and Jesse, so the show continues forward with Jesse burning down all of his painful and twisted past.

Season four is all about the shit literally hitting the fan. As Jesse’s plan to meet God comes closer and closer to happening, Herr Starr and the Grail themselves are also getting closer and closer to their plan of starting Armageddon. This season does an amazing job showcasing the bureaucracy of evil and good planning out the end of days, and talking terms, while still allowing the characters to traverse the furthest ever. In distance and personal journey.

All of this leads to a shocking conclusion where God’s plan to kill humanity, to bring a new species to the planet who will love him more, is prevented by Jesse and The Saint of Killers. It’s further drawn home when Jesse warns god that he can never return to Heaven, before releasing Genesis to be free.

ACTING: 7/10 Conner’s Thoughts
I want to first start off with talking about Joseph Gilgun portrayal of Cassidy. It was amazing, and it was easy to fall in love with the character. While Jesse’s character arch required him to be a jerk, and redeem himself several times throughout the series, it caused some issues where you want to root for him, and you do feel bad for him in places, but you can’t help but think he is in this situation because of his choices.

Ruth Negga was probably the character with the most growth through the series, haven been written well, and the developments portrayed with grace and skill.

A show like this though, as we have said before, is very much led by the villains. You have to give it up to them. From Graham McTavish, as The Saint of Killers, Pip Torrens, as Herr Starr, Noah Taylor, as Hitler, Jason Douglas, as Satan, to Mark Harelik, as God (and yes he does qualify as a villain in this show), you have an amazing foil to run against.

I give major props to Jeremy Childs and Colin Cunningham as quick villains Jody and T.C. in the third season. I love Colin Cunningham and have since Blood Drive and hope he has many more characters for me to enjoy in the future.

Everyone has a motivation, and while it’s hard to tell what the motivations of God are in the show, it all comes together in the end, and then blows up in an Australian outback.

OVERALL: 7/10 Conner’s Thoughts
I think the conclusion, with the final fight at the Alamo, was a bit weak story-wise. That being said, it was interesting.

I also wasn’t a huge fan of the flash forward with Ruth Negga playing Tulip’s daughter. I also felt Cassidy’s killing himself to be with Jesse and Tulip didn’t make sense, since he spent their whole life ignoring them.

That being said, it was still a fun ride, and I would watch again.

Conner’s Final Thought(s):
I’m a huge fan of the absurdity of the series, from good guy Hitler’s strip mall army, to Arseface becoming a rock star, the show was weird in parts and insane in others. They cloned the bastard offspring of Jesus and then killed dozens of them.

That being said, I honestly am very sad it was over. I know they had more content they could have played with, and there was some stuff from the books that I wish they had brought into the actual show, but I can accept what they have given, as it felt like a true conclusion.