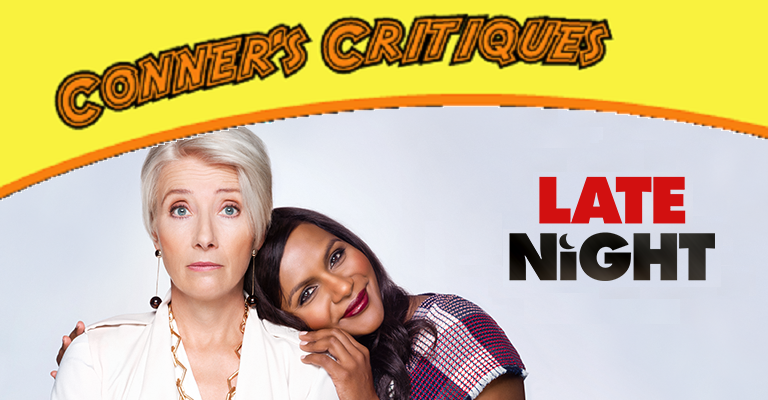 Hello and welcome to Conner’s Critiques. My name is Conner Sharp and today I am covering the new movie, Amazon’s Late Night. We are very happy to bring you a review based on our sneak preview of the movie. My reviews/critiques will be based on three categories: Story, Acting, and Overall. So lets begin.

STORY: 6/10
The movie doesn’t really stand out as a new or wholly unique premise. This has been done multiple times in the past, the major difference being that this one focuses on a female at the heart of it. For the most part though this movie could have had a male lead and it wouldn’t have directly affected the story to much. That being said, while the story has been done, I will say that the different point of view does freshen it up a bit, but I can’t give it credit for that alone.

The major concept is that a female old guard late night talk show host is dealing with ratings that are dropping. She decides that they need some diversity, and then shows up wet behind the ears protagonist, who says that it is her dream to be a writer. However, can they make changes to their show before the network replaces them all?

ACTING: 7/10
I’m so torn here. This is probably the first thing I’ve seen Mindy Kaling in that I liked her in. John Lithgow killed it, and was very lovable. It was nice seeing Denis O’Hare in a role that wasn’t a murder/weirdo/creep, and the supporting cast of Max Casella, Paul Walter Hauser, and Ike Barinholtz was light, and enjoyable.

It almost is easy to say that this movie has a great cast. But… Unfortunately it suffers a bit in a couple ways. For one, while I love Emma Thompson, and feel like her skill is amazing, it almost feels like she is phoning it in for most of this film. Her trade mark sarcasm is there, but it feels like it isn’t backed by any heart. This performance wouldn’t really tank the movies acting to this degree, but a movie is only as good as it’s enemy/love interest.

The film has Hugh Dancy as the love interest and mental foil of Mindy Kaling, and when I saw that I was excited. I love Hugh Dancy. However, my love for Dancy was for naught. His story arc is so worthless and wasteful with no resolution. As a result it massively drops the quality of the film in a massive way.

OVERALL: 7.0/10
It is an enjoyable watch, I don’t know if you should see this in the theaters or just wait for Amazon streams it. However, as I’ve said, if you are looking for a good date movie, something with a light hearted flair, then this is a good movie to fill your Friday night.

Conner’s Final Thought(s):
I personally like this movie, and hated it. I don’t hate Mindy Kaling, but something about her voice, personality, and face bothers me. I don’t know why. I am sure she is a lovely and friendly person. I hate this movie because it made me like her more, so now I will likely watch more Mindy Kaling properties, and therefore will likely be upset from hearing her voice. Congrats to her for being so likable in this movie.