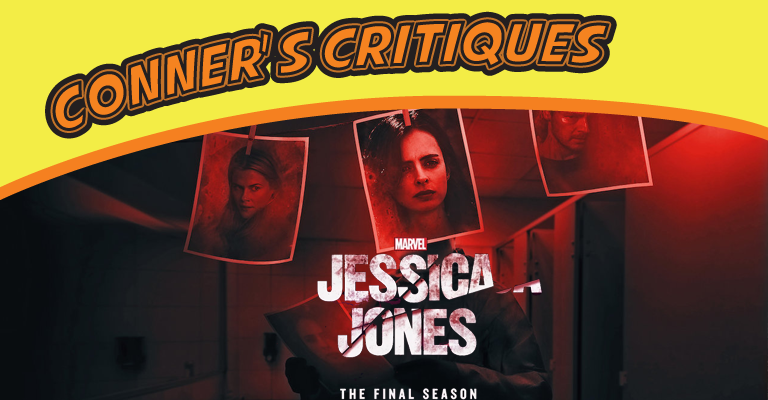 The set of Marvel shows on Netflix have come and gone, and the last to air was the important and impressive Jessica Jones. While the story was short, a small 3 series, it can be longer then a lot of shows that come and go (Marvel’s Gifted two seasons and Marvel’s Inhumans one season).

Jessica Jones was an awesome series with a strong, albeit damaged, female lead. One of the impressive actions that the show did in the second season was using exclusively female directors, with a female showrunner.

They never dodged the punches of hard hitting subjects, rough, and tough topics. So without further ado, we are punching up with our review of the entire stuff. We break down the critiques of the three categories: Story, Acting, and Overall. We will do our best to not delve to much into the conclusion of the third and final season, but just in case we let a little slip Spoiler Warning.

STORY: 9/10
The shows first villain was a dark and psychological monster. They literally dealt with a villain that didn’t have to confront Jessica Jones in a physical combat level, where she would easily exceed. In the second season of the show, Jessica had to face off with someone who had the exact same power set, but stronger. To increase the psychological turmoil, and frustration for the main character, the person ended up being her believed dead mother. However her mothers crimes made Jessica have to choose between justice, or the family she lost so long before. The third season was even more psychotic, as Jessica attempting to actually be a hero, faced the first enemy that made her feel powerless with his superior intellect.

Each villain and situation was powerful, and a worthy and uneasy foe that challenged her in unique and interesting ways, while a bunch of world building events happened in the background.

ACTING: 9.5/10
Krysten Ritter does an amazing job portraying Jessica Jones, with the help of a strong supporting cast of Rachael Taylor, her adoptive sister, Eka Darville, her protege/loyal friend, and Carrie-Anne Moss, her employer/friend/foil. A hero is only as good as their villain that they fight. The villain represents the mirror at which we look at our hero.

David Tennant, Janet McTeer, and Jeremy Bobb were intense, formidable, and nothing portrayed by them fell flat or was over the top. Well, a couple of the behaviors were over the top, but very on point for the well thought out and built up backstories.