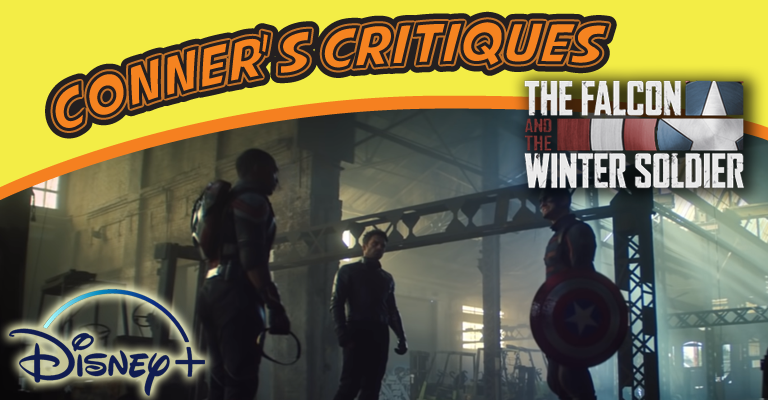 Are you loving the Disney+ MCU limited series this year? Strong off of WandaVision, they kick off the transition from Falcon to Captain America. It’s been some time, so I’m not even going to put a spoiler tag on this, but if you are upset to see it ruined for your before you watch, then first how did you go this long without having it ruined? Secondly, I’d recommend stopping here if you want to enter it clear-minded, for those who don’t mind a spoiler, but wants to know if they should delve in… This review is for you!

Like normal, this critique will be based on three categories: Story, Acting, and Overall. So let’s begin.

STORY: 7/10
Anthony Mackie does an amazing job portraying Sam Wilson, and showing his hesitance with picking up the shield and mantle of his retired friend and crime-fighting partner of many years. The series makes his internal struggle front and center for the majority of the series until he takes up the shield and all it entails. At the same time though, it does a great job showing the conclusion of Bucky Barnes, played by Sebastian Stan, letting go of the past and pain of being the Winter Soldier without taking away from the main story.

While they gender-swapped, and massively changed the storyline of the villain Flag-Smasher from the comics, the incorporation of Erin Kellyman as Karli, as the series villain/adversary was a great idea in the wake of the events of End Game, but I will admit that they stopped developing her character halfway through the series, and just made her a crazy soulless goon that couldn’t be reasoned with. I would have loved to see Sam get through to her, and for her to go to the raft.

ACTING: 9/10
Holy hell did Wyatt Russell do an amazing job playing a character you just wanted to hate? So many people took that hate outside of the show into the real world, and it was quite sad. That being said, when he took gave up the mantle of Captain America and self-absorbed attitude to focus on doing what was right, it was like a major character shift and I instantly started to like the character.

I loved to see Emily VanCamp back as Sharon Carter, (our own Gloria Glen did an article dedicated to her birthday which you can find Here), it was very clear what was going on in the background with her character, and I would have loved to be surprised with her unearned arc, but I’ll just have to accept it as it is.

OVERALL: 8.5/10
This series is enjoyable to watch, not too long, and does a great job of not shying away from the topic of race. I loved how they showcased an amazing comic story hidden within this show by telling of the first Black Captain America. Isaiah Bradley is a powerful story from the comic book series TRUTH: RED, WHITE AND BLACK, published in 2003.

Additionally, the series plays another cog in the larger MCU world by setting up the Anti-Avenger Group Thunderbolts, but putting John Walker in his comic appropriate role as US Agent.

These Disney+ series do an amazing job using their extra time to set up so many cogs that can either be played for bigger stories down the line or just primarily as easter eggs to die-hard fans.

Conner’s Final Thought(s):
One of the coolest things they did after the conclusion of the series is they officially changed over the Captain America Twitter account to the new character, changing the bio. They are showing a commitment to the characters moving forward with their stories. They have a new Captain America movie planned, and there is even the potential for another series of the show, which would likely be a step down though after doing a full-length feature film.

In the wake of the show though, a lot of people have recently been trying to “ship” Captain America and the Winter Soldier. I get it though, both characters have a hate-love bromance built over the fact that they have such a strong connection to Steve Rogers. However, it’s fair to say that there is no chance for a romantic relationship between the characters, as it appears that Bucky is at least mainly straight, and the topic of sexual preference has never even been addressed with the new Captain America. This might be based on the fact that we really haven’t had a focal point hero in the MCU that is LGBTQA+. Time will tell though when we will see that.

I will specifically say though, if you want to believe they love each other like that, I’m sure there is plenty of fan fiction to fill your interests.