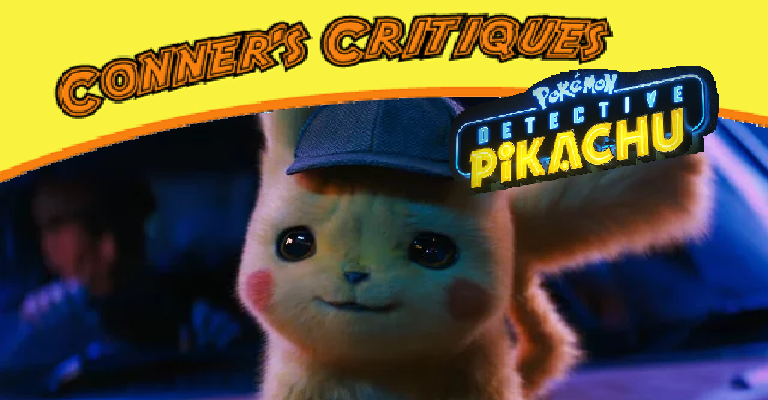 Hello and welcome to Conner’s Critiques. My name is Conner Sharp and I’m very excited to return again to do another review for this website and share it all with you. My reviews/critiques will be based on three categories: Story, Acting, and Overall. So lets begin.

If your reading this, you are most likely interested, or have watched the shows, played the video games, played/collected the card game of all the Pokémon content from all the years prior. Hell it’s likely you even play Pokémon Go. I can tell you right now, you can stop reading this review if I am correct that you have done all of that, go see this movie. You will love it.

STORY: 7/10
Do not expect a ground breaking story, and if you’ve played the game, pretty much you already know what is going to happen. If that is the case, just enjoy watching Pokémon run around the real world. I mean that was what Pokémon Go was promising, and then completely didn’t deliver.

That being said, the movie is a good film for children and nerdy Pokémon fan parents. It isn’t going to be groundbreaking, but were you really expecting it to be?

ACTING: 6/10
The movie starts with an awesome cameo, but I wont ruin it. However once it movies past that point, the main character, Justice Smith, is interesting and fun but a bit boring and doesn’t deliver a strong performance. The female lead is interesting, and quirky but never given a chance to really shine, which is sad because Kathryn Newton is really a breath of fresh air in the piece.

Additionally, Bill Nighy does bring a skill level in the film, that you’d expect. His acting is actually really good, and not feeling like a big actor phoning in a performance for a kids movie. However, he again is wasted in the film. Why did they not allow Kathryn and Bill have the room to grow and shine? Was it so that Pikachu could make inappropriate and snarky comments? I mean, those were funny, but I would have removed a couple if it allowed Kathryn more screen time.

The movie even includes a romantic arc that doesn’t feel earned, and while the actors try, they just can’t pull it off.

OVERALL: 7/10
It’s not an amazing film, but it’s definitely worth watching. I’d highly recommend that gamers and families watch this film. The comedy is wholesome for the most part, and the special effects are amazing. The journey is not amazing, and the story is not original, but it doesn’t lose out on it’s presentation to much as a result.

Conner’s Final Thought(s):
This is not an amazing film, for the sake of a film, remove Pokémon from the film, and it’s a sad example for a film. But you can’t take the Pokémon out of this film and you shouldn’t. The visuals are amazing, and the addition of such in a realistic manner helps children imagine the world as theirs. This film will be a great movie to see with children and adult fans alike.