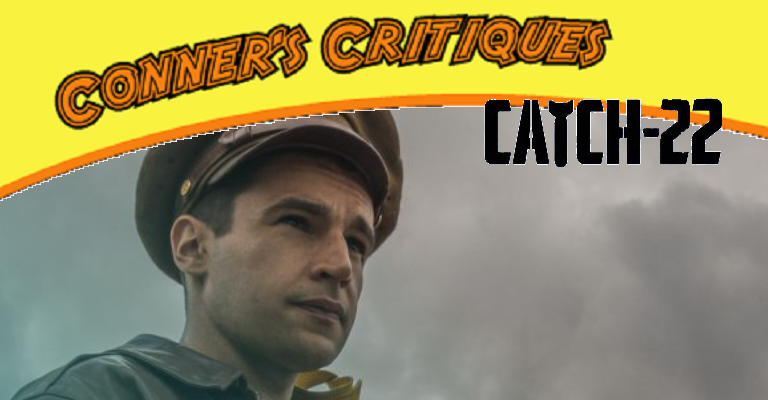 Hello and welcome to Conner’s Critiques. My name is Conner Sharp and today I am covering the new show on Hulu, Catch-22. We are very excited to give you guys a sneak peak review of the show before it comes out on May 17th, 2019. My reviews/critiques will be based on three categories: Story, Acting, and Overall. So lets begin.

It looks like this show will be a single series, or more likely a mini-series, and not a continuing show.

STORY: 7/10
The book is coo-coo bananas. Filled with so much symbolism and hidden meanings by the writer. It’s told in an almost disjointed setting. Not all of that could really be transferred into the TV show. That being said I really liked the show. I feel like it wasn’t exactly loyal to the book, but more hit the major plot points. The main characters feel almost like different people at time. For people who enter this film looking for a faithful adaptation of the literary work, you may be disappointed, if you can’t see the beauty of the piece from an outside novel perspective. That being said, the story flows a little better in some parts then the book, but misses some huge resolve.

The ending specifically, while the book itself requires a little but of interpretation to understand the conclusion of the character, the show seems to not fully conclude anything, which may be intentional.

I feel like the show hit enough of the book points that there is nowhere else to go with the story, and that it’s done, but the ending on the show feels like they were preparing to continue if they wanted to after it is rated by viewers. Therefore I didn’t really get a sense of closure in the end, or even that the character grew. We will have to see if they do try to make a second season.

ACTING: 10/10
Solid acting on the part of a very large cast.

Kyle Chandler, George Clooney, Hugh Laurie are huge names that bring such gravitas to the movie. Little known names like Christopher Abbott, and Daniel David Stewart kill it as Yossarian and Milo. They are engaging and enthralling. Interestingly, Kevin J. O’Connor was actually one of my most favorite editions to the cast. When I first saw him, I couldn’t shake “The Mummy” from my mind, because he played Benni from that film.

They as a whole cast sell the amazing story, with the help of a huge and amazing cast. I will say at first, the show gets lost as a result of a very large group of soldiers. It takes about an episode in for the characters to stand out on their own, and be even noticeable as any specific character.

OVERALL: 8.0/10
It is beautifully edited and cleanly and artistically put together. However, it can be slow in times, emotionally frustrated, and the ending of the show is lacking in the satisfaction of a stories conclusion. I think the journey is worth it, just lacking in the ending.

Another interesting point I want to talk about is it’s tone. It is a heavy story, with large and small bits of comedy thrown into it. This combination of the absurd mixed with the traumatic is very juxtaposed and causes them to both be amplified.

Conner’s Final Thought(s):
This show hits a lot of trigger subjects. Death can be sudden, shocking, and intense. Also some other activities from characters can make you very uncomfortable. However, the story itself is very amazing. If you can make it through the show, it is filmed, edited, and masterfully finished to create a beautiful period piece.