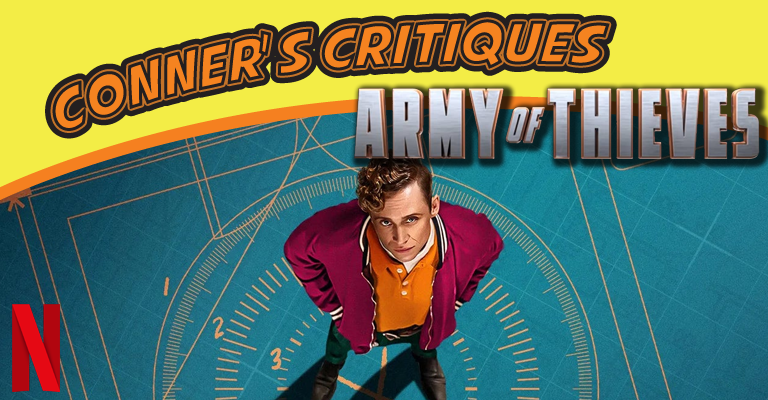 Full disclosure, I have not watched Army of the Dead, a lot of people for the site have watched the film though, and they did rather enjoy it. I don’t normally watch a lot of zombie films. Regardless, when I saw the Army of Thieves film coming out was a bank heist film instead, I was very interested. Who doesn’t like a heist film? So I jumped at the chance to review the film.

Originally I wondered how a bank heist film could be a prequel to a zombie apocalypse film, but after having watched the film, it makes perfect sense. While I still haven’t seen Army of the Dead, you don’t need to watch it to understand Army of Thieves or enjoy the journey. There is a really great stinger scene at the end of the film that really leads into Army of the Dead. So… Enough stalling with a jump into the review. As always we break down the critiques of the three categories: Story, Acting, and Overall.

STORY: 9/10
Immediately our first interaction during this film is with Sebastian Schelencht-Wöhnert played by Matthias Schweighöfer. It is a beautifully and artistically intro, without beating the story into our head. We are shown the everyday boring life of Sebastian. The monotony, the order, the monotomous order. The form is so beautifully displayed via Sebastian. It doesn’t even specifically look like a horrible life, but how it can clearly feel stale. It just isn’t an exciting life.

With Sebastian’s personality though, it almost seems like his perfect life. He comes off as not being that adventurous or outgoing as a person. You can see how he actually enjoys most of the routine of his life. Before he starts his boring everyday routine though, he engages in his true passion. Since childhood, he has been interested in the history and knowledge of safes and safe cracking.

With his practical level of skill, it’s a wonder why he would have been stuck working in a boring job handing out checks to irate people. Why wasn’t he a locksmith? I imagine he would have gotten great pleasure from that job. Are there just no locksmiths in Germany? He pours his love and skills at safe-cracking on his YouTube channel, and it’s this venue that puts him in the crosshairs of an international ring of criminals.

I say international, but they all seem to be from England with the exception of our main character.

Now Sebastian is given the chance to truly live the dreams of his passion, cracking safes that he has only studied, but also been obsessed about for the majority of his life. Nothing is as easy as it sounds, as the internal politics of the group, an obsessed Interpol officer, the looming zombie Apocalypse, and a ticking clock forms the catalyst that Sebastian needs to achieve the things he could never imagine he would be possible of.

The story is fun, the editing is stylistic and interesting. The character backstories are like icebergs showing only what we need to know as an audience member, and not beating us over the head with the depths that lie beneath it.

ACTING: 9/10
Earlier we talked about Matthias Schweighöfer and his amazing performance as Sebastian, but his counterpart Gwendoline, played by Nathalie Emmanuel is also amazing. Their chemistry is fun and believable. Their passions become so intertwined, and their care and concern for each other, although happening incredibly fast makes so much sense.

Gwendoline gives Sebastian the life he always wanted, while literally breaking him out of his boring world. She represents more than just a sexual partner, but the manifestation of Sebastian’s escape to a new life. For Gwendoline, Sebastian is an honest form that will not lie to her, accepts her as she is, and sees her desires and not only doesn’t talk them down but supports and understands her drive, having labored in exile himself, although self-imposed.

While incredibly quick, their relationship is less about each other, but what who they are able to become with each other in their lives.

OVERALL: 9/10
I find myself repeating myself, I love a good heist film, and even though I didn’t watch Army of the Dead, this film stands out on its own as a great story, and an enjoyable use of your time!

Conner’s Final Thought(s):
I love the beautiful backstory of the creator of the mythical safes of the game, I love the beauty of it. It reminds me of the introduction to The Curious Case of Benjamin Button. It really helps fill the lore of the world, and the interest and obsession with the elements of the world.

Without this scene, this move might not have been so awesome, but it helps set the tone of reverence, and even clearly showcases so much of Sebastian’s character.