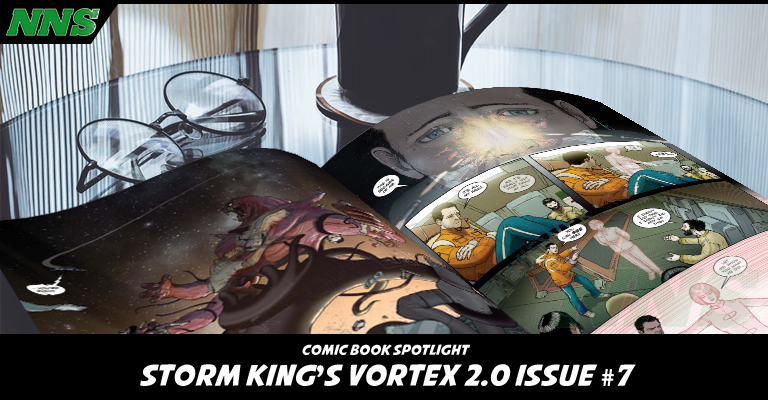 Welcome back, folks! Sorry, it took me a little time to get back in the saddle for the review on this series. Rest assured, it has everything to do with my schedule and absolutely nothing to do with the work I’m reading – Vortex 2.0. It’s still as exciting a series as it was last time I wrote a Spotlight for it.

It’s an especially interesting time in regards to space travel lately, with Jeff Bezos, Elon Musk and Richard Branson dipping their metaphorical toes into the final frontier. I know the zeitgeist surrounding this stuff errs on the side of cynicism, but it leaves me hopeful that we can once again turn our eyes skyward and wonder, with intent, what might be out there for humankind.

Hopefully, it’s nothing like the Kilp. (I mean… your mileage may vary on that one depending on your views re: billionaires in space. But I digress.)

While million-dollar rocket rides are beyond most of us, we can at least enjoy space as viewed through the porthole that is the comic book, right?

Last we caught up with our crew, they were fleeing Menemsha Bite after having been attacked by a Kilp infected Great White Shark. Oh, and a positively eldritch-level octopus. We get to see a little flashback to Munro visiting her Mom and they have a conversation about the possibility of Munro venturing into rift space, a place that Munro’s Mom actually studied at some point in time.

Mom, as one might guess, is relatively unhappy at the thought that Faye is even considering going there.

Back in the present, the ghostly Miss Sinclair shows up but – plot twist – Dixon isn’t the only one who can see her after all! I won’t spoil who else is in the know, but she proceeds to give us a version of events that we haven’t seen before. Is it the real version or not? Hard to say.

They make it into the habitat to find a bunch of dead folks. They haven’t been taken over or used in brooding, alien architecture which seems strange. Usually, the Kilp utilizes every part of the things it takes for its own… what could have influenced this organism to change its ways?

Despite all the danger present, our crew finds themselves a safe place to make their temporary base of operations while they watch the footage from a dropped news camera. The seriousness of the situation is brought home in a grisly fashion as they see the reporter who was to be delivering the news get herself torn apart by the kelp in her body. They also get a call from Magnus! He survived and is with a group of fellow survivors who seem to be making their last stand.

Will the two groups join up? Will they be enough to hold back the enemy? Heck, will they survive? No one is safe in this book so your guess is as good as mine.

As per usual with Storm King’s stuff, this book is amazingly drawn and really, really well written. Seeing all the plot threads work themselves together like little black tentacles is great and had me grinning at several points during the issue. Again, I’m not really a big one for gore but I can definitely appreciate the artistry behind the utilization of it in this book. The progressive raising of stakes can lose that visceral pull after a while – sure, the Kilp could potentially wipe out humanity. That’s a bummer. But, the fact that we know some of these people and that the characters we’re, by now, attached to know and care about these people make it so much more than that. It feels real when we can attach a name and a personality to the folks affected by this event.

Pour one out for Alice, never again to host the six o’clock news.

All in all, I highly recommend this title if you have any interest in cosmic horror, or just horror in general. You’ll love it.