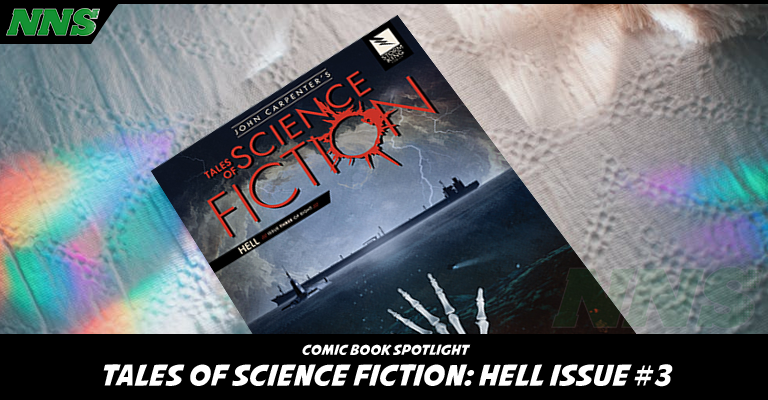 Hello! It’s time to delve into the third of Storm King’s supernatural series, Hell in John Carpenter’s Tales of Science Fiction line-up. As we said before in our prior review, Issue #1 and Issue #2, This series deals with the realization that not only is Hell real, but it’s a place much closer to us then we ever thought before. Now that we’ve covered the wildly unknown figure of Kartkas, we add a couple of new characters and get ourselves down to the gate!

So let’s jump into the third of eight on this comic book series!

The last two explorers are added to our troupe, a married couple and a set of famous explorers stumble upon the expedition in their personal submarine. Due to their status, it would be harder to disappear them, than to simply include them. So they are allowed the ability to join no matter how unlikely that would be.

The groups load up and approach the actual entry point. It’s there that the people are allowed a final pause before the descent into hell. Last-minute discussions and a little more insight into the relationship of Billings and Samples are shown.

While this episode feels a bit slow and un-needed, it might just be the fact that I can’t wait to enter into Hell.

I continue to love the interactions of Kartkas and the rest of the group, as he struggles to comprehend the humans he travels with, and what his journey could mean to both his and their people.

I guess We will see what happens when they enter Hell in the next issue!

You can pick up the issue Here or the whole collection in one paperback via pre-order Here, releasing in early April 2022!