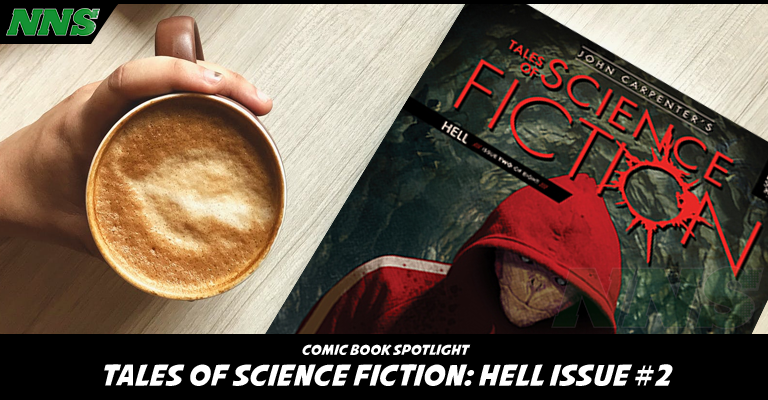 Hello! It’s time to delve into the second of Storm King’s supernatural series, Hell in John Carpenter’s Tales of Science Fiction line-up. As we said before in our prior review, Here, This series deals with the realization that not only is Hell real, but it’s a place much closer to us then we ever thought before. While the first issue was setting up the crew of the expedition, this issue is all about our lizard humanoid friend Kartkas.

So lets jump into the second of eight on this comic book!

There is unfortunately no story progression in this issue of the series, with the exception of delving a tiny bit more into the story of why Billings doesn’t trust Samples.

In the story we pick up where the first issue left off on Kartkas’s introduction, and tells how Kartkas got out of police custody, so that he would be able to be on the boat and about to make an expedition back into hell.

As Kartkas tries to make his way through New York, we follow the two detectives trying to find a way to explain his existence, and what his purpose would be in their city. While one officer is willing to lean into the concepts of Hell, and it’s denizens, all the other officers in the station are more inclined to think Kartkas is just a freak.

The issue then ends with the arrival of a submarine upon the crew’s tanker, with questions about what is going on.

In comparison to the prior issue, this one has a heavier concept, as it deals with xenophobia, and the treatment of those who are different to them. I really feel for Kartkas, who just wants to get back home, as he is just as afraid of humans as humans are of him. With regards to the officers, I feel like the one gets it right so quick and so easy it’s unbelievable, but as a result the story can move faster. The issue is less them 38 pages, so we can’t delve into the officer really reading books and investigating the origin of Kartkas before looking for him.

I do however like the way they play with the dynamics that what Kartkas is used to in hell is different to ours, and therefore would view it as negatives in comparison.

What is the submarine there for, who sent it and what will happen? We’ll have to wait and see I guess.

You can pick up the first issue Here or the whole collection in one paperback via pre-order Here, releasing in early April 2022!