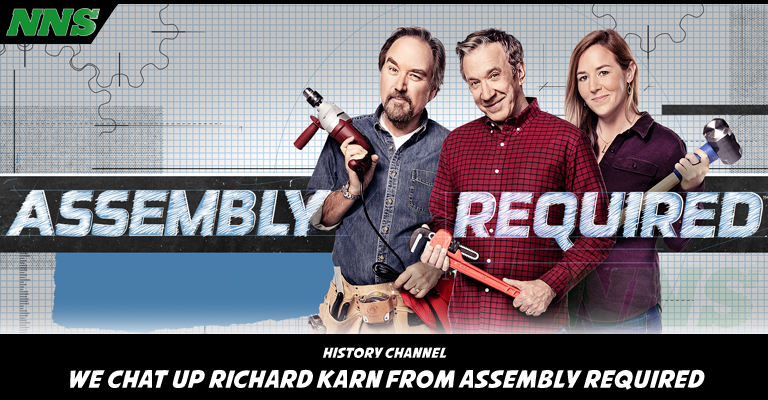 Last year we shared that Tim Allen and Richard Karn were coming to the History Channel with their show Assembly Required, see our prior article Here. Now the series finally has a release date! It’s coming into your home on February 23 at 10:00 p.m..

We were very lucky to get a chance to chat up Richard Karn, one of the hosts from the series, ahead of it’s release. Find out what he had to say!

Eric Bryan Seuthe II: First I wanted to say thanks to both of you for taking the time to chat with us about the show, when I was growing up, I was a huge fan of your series Home Improvement, and look back at my time watching it with my family fondly. Home Improvement did an amazing job showcasing that there were many levels to what some would consider manly. While some looked to Tim and his “More Power” bravado, there was always balance in the show with Al’s sensitivity, or Earl Hindman’s Wilson, who showcased a true renaissance man of many skills. When most people my age think about power tools, we think about you two. When you look back at your time in the series, what’s your favorite memory?

Richard Karn: There are so many favorite memories and a lot of them coincide with the fact we had a lot of guest stars. A lot of very interesting guest stars. At one point we had an episode where we had both Ernest Borgnine and Jack Elam on and just sitting backstage with them and talking about old Hollywood with them – that was really, really, really fun. The fact that we had the Andretti’s on, seeing what the Andretti’s were like away from race car driving. We had Ann Miller on, again old Hollywood. And the Beach Boys! When we had the Beach Boys on the show, that was so much fun because they were goofy, we would talk and they would laugh and then once they started singing and would hit those harmonies it was like “WOAH!” A lot of my best memories coincided with some of the great guest stars that we had.

Eric: Binfond tools aside, do you have any specific tool brand preference?

Richard: You know what…I like them all! They all pretty much do the same thing but yeah the red of Milwaukee, the yellow of DeWalt, the blue of Makita, the black of Craftsman… I can go on and on. Tools are just innately cool and fun to have!

Eric: What was the inspiration to have contestants improve and repair household items?

Richard: Tim (Allen) had his own reaction to this and I had a parallel reaction without talking to each other about having things that have broken that we need to fix or we want to fix because we don’t want to throw it out. And then Tim and Kady (Katherine D. Fox – executive producer) just took it to another level and they said why don’t we think about building a show around this? And when he asked me to come on and do this with him, that’s when I realized this is something I’ve thought about a lot and I’m so glad we were able to do it. And then to bring on experts, people that are really talented in a particular area and then put them in a situation where it might be just adjacent to what they are really good at but they still figure out how to do it. It’s so great!

Eric: Was there any item repaired or “improved” by the contestants that really impressed you?

Richard: Well I got to say in the premiere episode we had a metal worker who built a flame thrower/leaf blower encased in metal which really was both beautiful and workable. It was a piece of art! That really, really impressed me. Also, the doghouses – there were two different doghouses that came out of the personal experiences of each of our builders. One was almost like a Frank Lloyd Wright, modern with straight lines next to a tiki hut of a dog house. That was very interesting, very cool! And the fact these guys made art that was also functional is impressive…just totally impressive!

Eric: With word coming out that Tim still has the “Tool Time” set, was there anything you kept from your time working on Home Improvement?

Richard: Yes, there are, a couple of things! Actually, there’s a pair of shoes I wear every Christmas — they are Hush Puppies — but they’ve got a red plaid on top and I wear those as my Christmas shoes so that was something. I also took my tool belt– I have Al Borland’s tool belt in my study!

Eric: We have all been working through the effects of the pandemic, how has it affected the concept and format of the series?

Richard: Well it affected it in a very large way in the sense that before, we were going to have the contestants come to us and do the build on our own set but because we couldn’t do that, as a result of the pandemic, we ended up going to their own workspaces and it created a whole other level to what this show can be. And the comfort level they had and the other materials they were able to incorporate into their builds that they would have only been able to use, using their own space brought in a whole other aspect which was very cool!

Eric: We can’t wait to go back to normal, but and when things more or less resolve with regards to the pandemic, how, if at all, will it change the show’s format?

Richard: I think towards the end of the episode, when we get to the reveal of the final two contestant builds — I think it would be really great to have the builders there, in-person, so cameras can capture their reactions of us playing around with what they built. That would be really cool!

Eric: Thank you for your time, and I can’t wait to see the show in action!