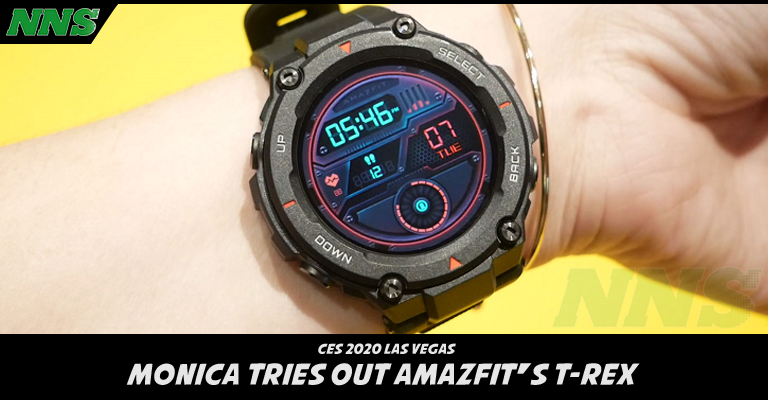 At CES2020, Amazfit held a press conference, announcing all of their upcoming products, which spanned many categories. They were putting a huge push on making ways to get the world motivated to embrace a healthier lifestyle through technology. This was made apparent with innovations such as their home gym models, which include a large screen meant not only to entertain and monitor your technique, but also daily workout classes that are led by actual instructors.

Amazfit has had a few different smart watch designs over the last few years, but this year they included an entirely new category: rugged outdoorsman. Made for those with an active lifestyle that can take them from skiing in the Alps to hiking Angel’s Landing in Utah, all the way to navigating the underwater labyrinth in the Cenote Calavera in Mexico, the T-Rex was created to handle all of this and more. 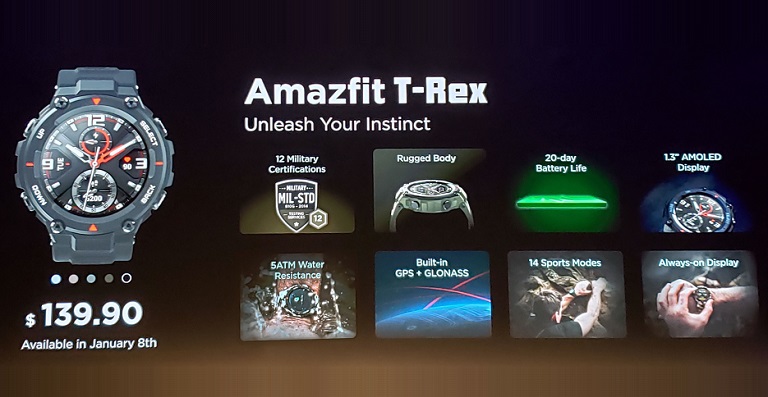 This dinosaur is named such not to indicate that it’s old and decrepit, but that’s it’s the king of all fitness watches. With 12 military grades, a body that won’t quit, 14 sports modes, a 1.3″ AMOLED screen that is still useable when wet, and a 20-day battery life, you can expect this watch to be with you through thick and thin, keeping track of where you are, how far you went on your trail, helping you maintain that ultimate heart rate for the best burn, and all with the most slick of designs. 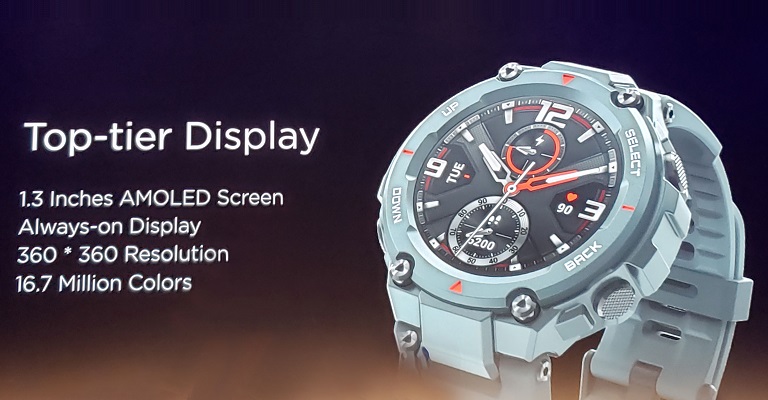 Amazfit’s press conference turned into a release party, as we were all given the gift of this incredible new product, the night before its release to the world.

And I wore it every day since then, so I could give you this review.

Through the rest of the convention, this watch has helped me keep track of my steps and my heart rate, and has helped me learned new things about my sleep patterns. I ran it through a bunch of tests to see how it holds up in my lifestyle… which is definitely not the lifestyle I described above, which is what this watch was designed for.

I’ve mentioned in a few articles that I’m also a nature photographer. This puts me in places that are hard to get to, and sometimes I have scaled the side of a cliff to get a shot. I’m also very ADHD and super rough on my equipment. The third and most dangerous part of my life is that I have a toddler.

So this review is from the point of view of an adventurous, clumsy, forgetful mom of a destructive monster who just yesterday ruined a pot because she left it steaming apples for four solid hours.

Design:
From the perspective of someone who has slight sensory issues, a really big factor in anything that I have to wear is how it feels. For me, things can be textured or smooth, but they can’t be scratchy, distracting, or so soft that it makes my skin feel like they’re the hook-side of velcro. There’s some microfiber stuff out there that is so soft I can’t touch it. The silicone band for the watch is very soft and comfortable, and the back of the watch has not caused me any discomfort at all, while wearing it both inside and outside my wrist.

The buttons are mostly inset, which makes them hard to push by accident. They are also in great locations, and easy to reach. The watch face looks huge on my tiny wrist, though. Aesthetically pleasing as it is, it looks like I’m wearing something that belongs on a much larger person.

The screen is crystal clear, and the colors are rich. Through the app, there is a large selection of watch face designs, and you can rearrange the items on the screens to your liking. You can also set up app notifications, so you can see incoming texts and get notified when your phone is ringing, that one of your Pokemon needs a berry or to be revived, or even alerts that you’ve been sitting around for too long today. That one is turned off, because I’m not here to be judged by a watch.

Battery life:
I’ve set this thing up with so much stuff. It monitors my heart rate every 10 minutes, it tracks my sleep, it tracks my steps, it vibrates my arm when I get notifications, it finds my phone when I lose it more often than I’d like to admit. This thing is always going. Amazfit boasts a 20-day battery life with regular use. I think I’ve overstepped that a bit, because it lasts me about a week before I start thinking maybe I need to charge this thing. But I also don’t let things go below 50% without charging up. So I’d say with the way that I use it, you’ll probably get 10-12 days of use before it goes from 100% to 0%, which is still pretty great.

Rugged:
Hear me out. I’m the worst. I run into stuff, I drop things all the time (I just dropped my laptop a couple days ago and now the speakers are broken and it doesn’t close all the way), I’ve slammed my fingers in my own car door, I’ve burned myself more times that I can count. During this week alone, I smashed my knee into my car door, I drank boiling tea and burned the entire inside of my mouth to the point where eating solid food feels like I’m eating broken glass, I burned my thumb on the stove, I cut my left pointer finger while chopping garlic, my daughter poked me in the eye while I was wearing contacts and straight up ruined that contact lens because my eye was leaking fluid, I bit my lip, and I’ve dropped my phone in my face several times. And that’s just what I did to myself. I completely destroyed a pot while steaming apples because I forgot it was steaming for four hours, I dropped my laptop and it barely functions now, I’ve left my phone in so many public places it’s a miracle I still have it. My daughter isn’t much better. She’s crazy fast for being one year old, she has ripped those really sturdy board books in half, she flips chairs and tables over, has ripped gates that are screw-mounted to my wall straight out of the wall, and will absolutely bite your nipple right off your chest. True story.

So I may not always be scaling the side of a mountain, but I am always in need of things to be rugged. That being said, this watch does not have a scratch on it. During CES, I bumped into walls and booths, was pushed by people day after day, and scraped it against things as I walked by them. I planted a tree yesterday and bumped it into a rock. I handed it to my daughter to play with because we were out and about a little too long and she kept grabbing stuff in someone’s office. She smashed it on the table, she chewed on it, she threw it at one point. I honestly feel like I should try to run it over, because this thing isn’t even dirty from what I put it through.

App Usage:
The app is very easy to use and designed well. It keeps everything organized in one place, and things are easy to find for the most part. It did take me a while to find the button to add apps for notifications, because it was very small, at the very bottom of a white screen, and the button was light grey. Almost like they didn’t want you to see it. My only other qualm is that when you’re looking at the heart rate tracker, you can select each peak to see details of that mark, but it’s a little hard to select some spots.

Built in apps on the watch include an alarm, timer, and countdown, event reminders, activities, heart rate, your current status, weather alerts, music control, a compass, sports modes, the settings for the watch (like the face, how long the screen is on, etc), and my absolute favorite function: Find My Phone. Find My Phone will use the connection from the watch to the app on my phone to make the loudest and most ear-piercing tone I’ve ever heard in my life, whether or not my phone is on silent. Other Find My Phone options turn on my ringer, which isn’t very loud at all, so this absolute banshee shriek of a sound is perfect for me.

The sports modes are really fun to play with. They track your GPS location at the start, then not only time you and mark your positions, but also track your heart rate and give you alerts to keep you in the zone. This is fun for people who enjoy working out, but I have enough issues with my heart rate spiking without any stimulation, so I’m probably not going to use this much. I do, however, have an alert to notify me of when my heart rate spikes, so that’s comforting.

Sleep Mode is automatic, which is great. I was using an app in my phone prior to this watch, and it’s not very accurate. Sleep mode tracks through movements and heart rate how optimal your sleep quality is. What’s really interesting is seeing how slow my heart rate gets while in deep sleep. At one point hitting 39bpm! Tracking your heart rate during sleep can also tell you how your body is reacting to your day. So if it slopes downward, it’s likely that you ate a late meal, because that’s indicative of your body digesting at bedtime.

Issues that I’ve run into:
I’ve had to keep my watch locked unless I specifically want to use it. I’ve found it constantly turning on and activating stuff that I didn’t want to activate, just from the lightest touch from outside sources. One of the most frustrating was accidentally turning on DND mode in the middle of the day, and having people get mad at me for not answering messages.

My favorite part:
Notifications, hands down. I am not good at responding to texts or phone calls. I don’t hear my ringer, and when it’s on vibrate, I won’t notice the message at all. Having my watch notify me through a very abrupt and jarring vibration is perfect for me.

Final note:
This watch is fantastic. I may not use it for crazy adventures outdoors, but I do have a good use for it in my life. Having something that reminds me of stuff that needs to be done, notifies me of messages, and is impossible to destroy? Perfect for my life. The entire reason I was not willing to spend money on smart watches from other manufacturers was simply because I knew they would get wrecked with the way I treat things.

For a cool $130, this watch is the exact right thing for more than those who live life jumping from helicopters. It’s also for ADHD moms of tyrant babies who are keen on wrecking everything nice that they own.

What are your thoughts? Any other products you’d like me to review? Let me know in the comments!

This review was not paid for or coerced in any way, and nothing written in it was exaggerated. Those things actually happened.