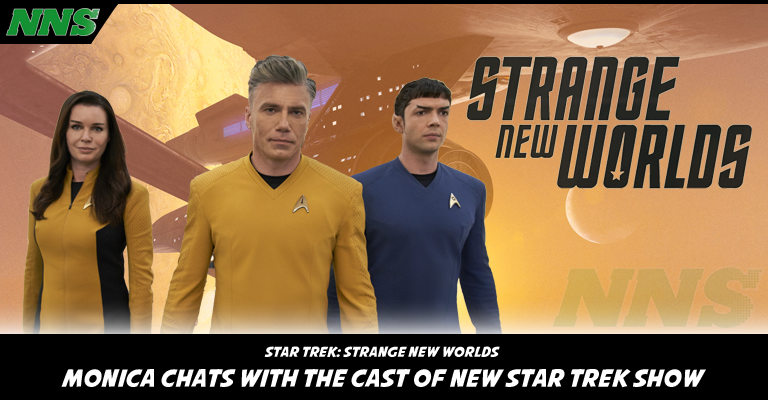 The incredible cast of Star Trek: Strange New Worlds carved stone time away from their mission to boldly answer questions no one has answered before.

Monica Scott: You’ve been lucky enough to be involved in so many amazing projects from X-Men, Chuck and Lana in DC cartoons, and now your in Star Trek! Do you seek out these more nerdy roles?

Monica: Or is this just something that is brought to you?

Rebecca: Um, I would say I definitely have an inner nerd that I embrace. I don’t necessarily seek them out, except I will say that the more fulfilling female characters are usually within that genre, within that universe. And especially as the mother of daughters, those are the roles that are more interesting to me to play.

Monica: I know you’ve answered a lot of questions about how your version of Spock differs from Leonard Nimoy’s. Since we are so used to seeing Leonard Nimoy as the end result of the character, how did you deconstruct that Batman Year One, getting that early version of the character based on only seeing the end results. How did you pull yourself all the way backwards?

Ethan Peck: That’s really a flattering comparison, Batman is awesome. I don’t know. I’m just kidding, I kind of know. It’s just be a very delicate and thoughtful process. I don’t think I was able to be the Spock that you see in the original series, a couple of years ago when I first got the role. I think even now, I might be touching on the more full spirit of that version of Spock, but I myself am in a place of development in my own life that I think really lends itself to this iteration of Spock. I’m just really lucky to be at the right place at the right time for this rule. To have been auditioning at that time, there are so many things that worked in my favor to put me in these shoes. I’m just trying to capitalize on those aptitudes that I seem to have.

Monica: The role of Christopher Pike, initially he didn’t test very well with the audiences and he was eventually replaced with the William Shatner character.

Anson Mount: Oh I thought you were talking about me…

Anson: Want me to call in John Stamos?

Monica: Haha, way way back in the day he wasn’t testing well with the audiences. So how did you feel when suddenly he’s wanted to be made into a character again, and you were tasked with taking up the mantle that so many others have played so well like: Jeffery Hunter, Sean Kenney, and Bruce Greenwood. What was it like taking up the mantle of the first “recorded” Captain of the Federation. Especially knowing that initially when he became Captain he wasn’t really well loved?

Anson: Well first of all, thank god I didn’t know that.

Anson: I think a lot of people have assumed, while having a tremendous responsibility to the role. I think a lot of people have thought my greatest obstacle or my greatest challenge was to live up to what has already been laid down, when in reality, not a whole lot has been laid down. Not a lot of material. And that was a different Pike in a different part of his life. That was a much younger and much more existentially in crisis young captain. This is second act Pike. I just followed the writers cues, and the writers wanted to bring in someone who is a little more sure in his boots, deep into his experience. So I really just followed what they were laying down. The proverbial trail of bread crumbs. I continue to follow their que even now.

Thank you so much for joining us in this adventure. Remember that the new series releases on Paramount+ on May 5th. Be sure to comment below, letting us know what you thought of the first episode of Strange New Worlds!