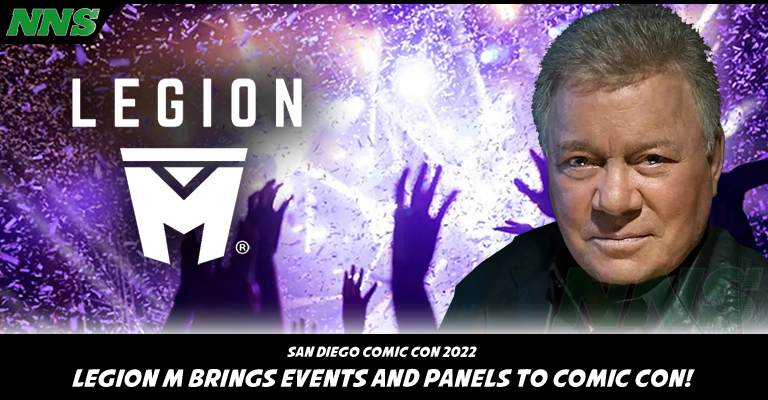 Looking to engage and learn more about Legion M’s projects and plans? Well, you can engage with them during San Diego Comic-Con by heading to these panels and events. See what options are available during the convention!

Taking place in the hardest place to get into during San Diego Comic-Con, this panel will be moderated by Kevin Smith and will discuss with William Shatner the career, projects, and future documentary. The panel will even include footage from the documentary and a Q&A!

Legion M will be taking over the Theatre Box in San Diego, during their time there they will be holding private events for ticket holders. Events include signing events and other opportunities for fans to connect with the man, the myth, the legend, William Shatner!

This event takes place at the Theatre Box throughout the day on July 21, 2022. Purchase tickets for the events Here. Included events are:

Telling the story of a Hungarian-American and para-psychologist Simon Pegg is playing Nandor Fodor in a new movie from Legion M. This panel includes director Adam Sigal and Legion M associate producer Clare King as they talk about this wildly original story. The panel is moderated by Executive Producer David Baxter and includes a special video message from stars Simon Pegg and Minnie Driver.

Legion M: How Fans Are Disrupting Hollywood By Equity Crowdfunding

We’ve shared the news about how Legion M has opened the gates to Hollywood to their fans with an investment system. Now you can hear about it from the horse’s mouth! This panel includes executives Jeff Annison, Terri Lubaroff, and David Baxter. The panel even includes special video messages from Sean Astin, Madison Wolfe, Brec Bassinger, Anne Marie Gillen, and Marvin ‘Krondon’ Jones.

Darkknights And Daydreams: From Batman To Broadway

The modern movie image of Batman owes a lot to Michael Uslan. When America was enjoying the campy action of the 1960s Adam West Batman, he was frustrated that the character was reduced from his roots in the comics. He spends the next four decades working to create an amazing representation of Batman, starting with the 1989 represention by Michael Keaton. Now his story is making its way to Broadway. In this panel, Michael Uslan will talk with Broadway’s Don Franzt and Legion M’s David Baxter as they showcase how they adapting Uslan’s story to the stage.

Which panels are you going to join?