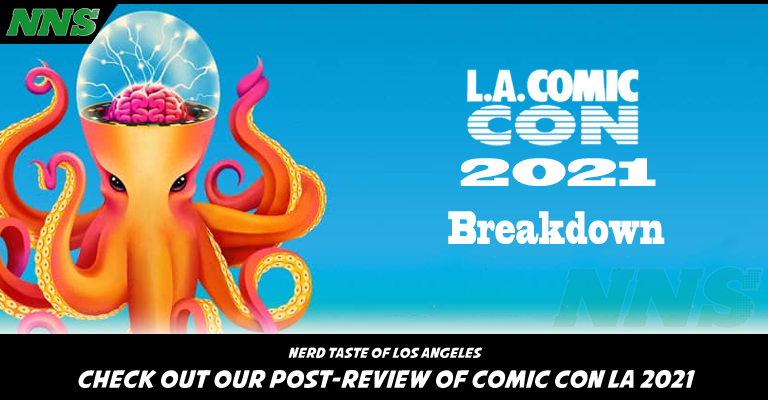 Los Angeles Comic Con has come and gone, and we were one of the over 94 thousand people who attended the 2021 event. Around 94,900 attendees over 12 years old was at the event, meaning even in the thralls of a pandemic, the convention only saw a decline of 8% for that age group. It’s insane to think that was the only decline while in a pandemic! We were in attendance, and I can admit that it felt like a real convention of older years.

2019 had an attendance of 123,400, which was their best ever, but it’s important to note that while the event declined a total of -23% with it’s attendance, 36,500 of those attendees were under the age of 12. Los Angeles Comic Con has always had a large child attendance! Chris DeMoulin, the CEO at Comikaze Entertainment, said “Given the vaccination status of most 2–11-year-olds, it’s not surprising that those fans were the bulk (74%) of our decline – almost 21,000 fewer from 2019 – and we fully support their parents’ decisions to stay home this year.”

It’s true though, safety is key, and if your kids have trouble keeping their masks on, or are too young to be vaccinated, going to a major event with tens of thousands of people just doesn’t make a ton of sense.

As for the fear of vaccination status or testing being an issue to allow entry into the convention, only 2% of the attendees arrived unprepared and untested or unvaccinated. The convention had set up multiple testing locations near the entrances to offer free rapid tests for those small numbers of attendees, out of the little under 2,000 people tested at the event, only seven received positive tests and were sent away.

While the convention was full of attendees, I will admit that the hall itself never really felt too crowded. I imagine that had a lot to do with booth spacing and the inclusion of the West Hall to the floor plan. The main stage however did get a bit crowded as the special guests being presented brought the crowd!

For exhibitors in attendance, sales were back up. One of the sad things I remember from this year’s Comic Con Special Edition was overhearing an exhibitor say “No one is buying anything,” so I’m glad to see that was not the case for Los Angeles Comic Con. Apparently more than a third of the exhibitors have already committed to return in 2022.

This wasn’t a regular convention though as Los Angeles Comic Con was also celebrating its 10th anniversary during this event, so the convention pulled out all of the stops. With that in mind, let’s now turn our attention to some of our favorite things about the convention!

The Main Stage
There were three panels on the main stage that really stood out to us while we were there, and it was the Smallville panel (featuring Tom Welling, Michale Rosenbaum, John Glover, and Laura Vandervoort), SpongeBob SquarePants (featuring Tom Kenny and Roger Bumpass), and Bruce Campbell’s spotlight. The fans lit up, the talent was energetic and excited to be there, and it frankly was an impressive and amazing presentation. If you missed it, I believe it’s still available online to watch. Look lower in our article for that information.

Tiltify Arena Stage and West Hall
The whole West Hall was dedicated to Gaming and Voice Actors as they brought an even larger stage than the Main Stage (which was weird), and on that stage professional gamers were presenting, or even playing with the fans in the audience! Great experiences like Jackbox with everyone in attendance were definitely a highlight. A little to the right of the stage though attendees could play with MSI computers on display for trying out, and a mini Smash Brothers arena. Behind all of that is a place where people could meet their favorite voice actors, or take workshops about the industry! The West Hall was an amazing idea and we were there for it!

Sideshow
Sideshow Collectibles were back from the online-scape of their mini conventions, and their beautiful statues and figures were once again on glorious display for attendees to appreciate. They even had their awesome Grogu on display outside of glass so fans could take their photo with it, and a QR code to instantly order the egg-eating fiend. It’s one of the staples of a convention for me, so I was glad to see them there!

Legion M
As part of your ticket for the convention, you were entitled to a free share from the amazing Legion M fan studio. You simply had to head over to their large booth and gain the assistance of the staff there. Additionally, the higher-ups of the company were all in attendance and walking among the fans. They took time to talk to investors or fans alike, while also displaying props from the company. If you wanted to celebrate your fandom a bit more, they even had a mini shop with some amazing shirts and products to take home. If you aren’t a member yet, head over to their Round 8 and buy-in Here!

Star Trek Dedicated Space
With the help of Atomic Studios, fans could celebrate Star Trek with dedicated signing halls, art displays, trivia panels, and more while also honoring Nichelle Nichols, who played Lt. Uhura in the original series, during her final convention appearance. It’s unfortunate that age has taken its toll, but fans were offered one last opportunity to share their love for her character before she leaves the nerd-space frontier. They all-in-all dedicated over 35,000 square feet of the convention to Star Trek which included a recreation of the bridge, and even a less popular smaller representation for fans to role play with!

Not enough content for you? We understand. Check out our interviews at the convention here:
Interview with Wild Bill’s Olde Fashion Soda
Interview with Eric Leland and Julia Leland

There were over 50 hours of programming streamed at the Comic Con Metaverse (by Vatom), and fans with FOMO can head over and watch that content for 30 days after the convention. If you miss that window though, you’ll have to wait till for your comic con fix!

However, if you missed out, or were in attendance and want more, then don’t worry Los Angeles Comic Con will return next year, and they are partnering with PCB Productions to bring AVOX 2022 to audiences in July 2022. AVOX is “The Actors Voice Over Expo”, which showcases the talented people who bring our anime, cartoons, and adult animation to life. We have always appreciated the hard work our Voice Over friends provides in some of our favorite content! AVOX will take place in Pasadena, so start planning accordingly!