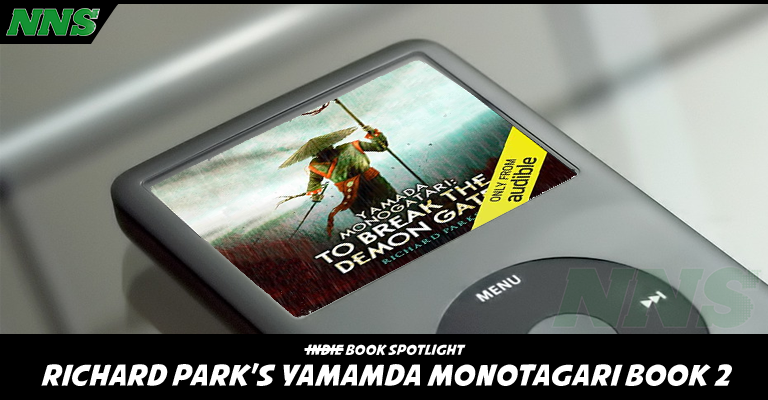 This month I’m tackling book 2 in the tales of Goji No Yamada. You can see my spotlight on the collected short stories featuring this character Here, but this is the next book in the series and is a novel length adventure for our hard boiled, hard drinking paranormal detective.

So, settle in. Grab some bags of raw rice for any spirits that might want to join you. Light a candle and let’s dive into a world where the occult and the mundane cross paths in ways you never expect, but will always appreciate.

Author: Richard Parks.
Formats: Kindle, Paperback, and Audiobook.
Price: $6.99 for Kindle, $14.99 for Paperback, $21.83 for the Audiobook, or one Credit on Audible.
Length: 288 pages or 10 hours and 21 minutes in audio format.
Narrator: Brian Nishii.
Number of books in the series:4 at the time of writing.

For anyone unfamiliar, Lord Yamada is a noble man who’s Father’s treachery lost him any benefits his title might have once gained him. No household, no land, no wealth – in fact, one might consider the widow Tamahara his true nemesis, being as he rents space in her establishment but he rarely has money enough to cover rent. (Couple this with the fact that he drinks to escape his personal demons and his career path is esoteric at best and you have what amounts to a millennial icon well before the turn of the millennium.) But he’s an overall really nice guy – for whatever reason, he seems to attract the strange elements in this world. He communes with spirits, he hunts demons, he can dispatch an ogre or vengeful spirit with his blade if he needs to… but will generally favor diplomacy if at all possible. These creatures that exist outside of humanity but from whom humanity can’t disentangle themselves… maybe there’s a certain element of camaraderie there on Lord Yamada’s part. Who’s to say?

This story starts within the pages of the first book, but thankfully we get that short story as something of a prologue; in it we meet Prince Kanemori and his sister, Princess Teiko. Yamada has a special fondness for the Princess, so, when she tasks him with a quest to regain an item that will prevent devious elements in the royal court from blocking her son’s ascension to the throne? He can hardly refuse. He and Kanemori venture into a haunted ruin to regain a scroll that…. proves her guilt and has her banished to a desolate seacoast where she’s expected to die?

Well. Even though the outcome of this quest was less than ideal, Teiko’s son, Takahito, is to retain claim to the throne. So, there’s that.

Yamada then decides to slowly, and sadly, murder himself by downing in bowl after bowl of sake. That is, till he receives word of something interesting from a mysterious lady. Known only as Lady Snow, she apparently has a lead on irrefutable evidence that his Father was not the traitor he was portrayed as before his execution. While initially reluctant to follow this information to the source, Lord Yamada winds up compelled to do just that as it seems to tie into a rash of mysterious murders around Kyoto. And, of course, he enlists the help of several familiar faces: Seita, the ghost who has taken the form of a red lantern who haunts a bridge into the capitol, Kenji the less than holy Priest and Prince Kanemori, the formidable warrior.

Can he clear his Father’s name? Can he ensure Takahito, the son of his beloved retains his title as Future Emperor? Can he survive!?

Read it to find out!

I was somewhat apprehensive going into this one. The reason why is simply this: The short stories in the first one were surprising and fun and each story lasted long enough to get across character, theme and action in a way that was very, very satisfying. They tied back into a larger narrative but most of them were episodic enough that you could easily enjoy them independently. Sometimes, characters suited for short form storytelling don’t translate well into longer stories; think of any time you’ve been disappointed by the Movie version of one of your favorite TV shows, for example.

I am very, very happy to say that this anxiety was not only unfounded, but in retrospect… kind of silly. Lord Yamada is a character that is great in both long spells and short. His particular mix of self depreciating, wry humor and man-of-action personality traits is incredibly engaging. This book sees him act first with compassion, second with his sword and that’s what made me enjoy him so much in the first book, too. There are raised stakes but, overall, it doesn’t prevent him from being honorable and kind till the end. (And those stakes get HIGH.)

I’d recommend picking up the first book before diving into this one. As much as the crux of the story is outlaid in the first chapter (Which, again, is taken wholesale from the first book.) knowing more about the
other characters and all their relationships will, I believe, enhance your enjoyment of this longer story. It’s not necessary, but it is highly recommended by me. Pick up the book Here!

As before, Brian Nishii does a phenomenal job at narrating the audible version.

So, I hope you enjoy this one, folks! Give it a shot!