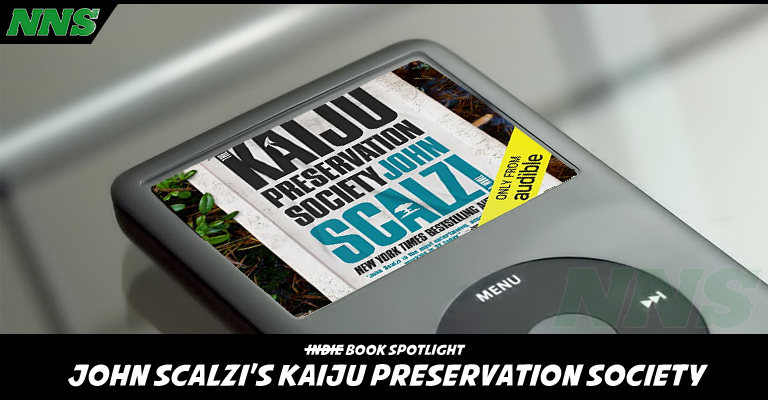 Hey, Readers! How are those Spring Reading lists coming along? I’m reading, but mine keeps growing instead of shrinking.

So, I’ve been on kind of a Star Trek kick lately. Since getting Paramount+ I’ve binged all of Discovery, Picard and the first 10 live-action films. Next, I’m looking to revisit The Next Generation.

“But Jim,” I hear you say “the title of this book isn’t anything to do with Star Trek and so I’m at a loss as to why you bring it up?”

Because, Dear Reader, the narrator of this lovely Audible title is a well-known name within the Star Trek Community: Wil Wheaton.

Cue half my readership complaining about Wesley Crusher and abandoning ship like scared Exocomps BUT, I’ll have you know, I always enjoyed Wesley’s inclusion and Wil Wheaton does excellent work in the reading of this book. Normally I talk about the narrator in the ‘My take’ section, but I thought this warranted mentioning up-front as it’s probably the one detail that grabbed my attention more than anything else and got me reading (Or listening to, if you prefer.) this book.

And this book is interesting on many levels beyond that… imagine one part Jurassic Park, one part Pacific Rim and a gentle sprinkling of The Social Network. If any of that sounds even remotely interesting to you, I can promise you a fun time.

So, slather yourself in the appropriate pheromones and a bee-keeper suit (This will make more sense later.) and grab your reading method of choice – we’re headed to Tanaka Base in the world of the Kaiju and we’re not coming back any time soon… if at all.

Author: John Scalzi.
Formats: Kindle, Paperback, Hardcover, and Audiobook.
Price: $13.99 for Kindle, $13.15 for Paperback, $21.99 for Hardback, $25.99 for the Audiobook, or one Credit on Audible.
Length: 268 Pages or 8 hours 2 minutes in audio format.
Narrator: Wil Wheaton.
Number of books in the series:It’s a stand alone title at the time of writing.

Jamie Gray actually really likes his job at Fudmud. He’s on the I.T. side of things and has some great ideas for how this start-up can start-up even harder. His performance review is this morning and he’s prepared with a presentation to show his boss, Rob Sanders, just how my better their service could be!

Only problem with this plan is that he’s no longer working with Corporate. He’s being given an exciting new opportunity as a delivery boy. Oh. Sorry. Delivorator. (If this sounds to you like it’s not actually a promotion, you’d be right.)

Now, you might guess that Jamie would tell this guy to take a long walk off a short pier. Unfortunately… Covid is just ramping up at this point and so jobs are at a minimum and Jamie does still need to pay rent. And eat.

Still! It’s not all bad. He does, by some freakish twist of destiny, manage to reconnect with an old acquaintance while delivering food to his apartment. Tom is a nice guy and during the many times Jamie delivers to him they somewhat reconnect. Even up to the point that Tom offers Jamie an entry-level position at the company he works at – KPS. Jamie would just be lifting things, so, not a massive career shift from carrying food around, but at least it would be for a different employer.

KPS is an animal rights non-profit, but Jamie would be paid well. And, it would be a definite shift out of his comfort zone as he’d be doing all the work out in the field for six months of the year. Working with critters, in the great outdoors, well paid AND he’d not have to Delivorate anyone’s food again anytime soon. Plus, the timing couldn’t have been better – Fudmud just got bought out by Uber Eats and all the staff were let go, so, it’s kind of this or starve? Living the dream!

Except for all the inoculations. It’s a long and nasty list.

Eventually, Jamie is done being a human pin-cushion and gets to start out on his journey. He meets some of his coworkers (One of which is a fellow Kiwi – THAT made me grin!) and they all travel to Greenland. Jamie assumes they’re going to be working with polar bears or wolves, as he has been told that the animals they deal with are very large.

As it turns out… think bigger.

They go through a door and instead of being greeted by the frozen scenery of Greenland, they’re in a lush, forested place. Think the rain forests of Skull Island, maybe. Because, while (Geographically) they’re still in Greenland… quantum physically, they’re on a whole other Earth. One ruled by Kaiju.

The K in KPS stands for Kaiju. They’re the Kaiju Preservation Society. As it turns out, Kaiju are very, very real and have come to our Earth before. Nuclear weapon discharge weakens the space-time wall between our worlds and sometimes lets things slide through. Once reliable, stable dimensional walkways were established, it was decided that there needed to be a multinational society to ensure that Kaiju remained on their side of the barrier, and on a more humanitarian level, were studied, understood and preserved. It’s a noble goal, to be sure, and the kind of place I’d love to work.

Of course, a project of this size needs funding. The world’s billionaires, politicians and philanthropists are more than happy to fund KPS, so long as they get to come over to the other side and check things out every so often. Of course, all this is kept as hush-hush as possible. Only a few are allowed to know… but a little knowledge can go a long way.

How does Jamie find his place in this world filled with mountain-sized monsters? You’ll need to read to find out.

So, stick a monster in nearly anything and I’m on board. Kaiju, Dinosaurs, Aliens, Gremlins, Ghosts, Pokemon, Digimon… whatever you got, I’ll take it. As I said before, I saw Wil Wheaton’s name on the blurb and that got me to take a second and third look before deciding this was what I wanted to spend my April listening to, but even then this is a fantastic story filled to the brim with critters, all fantastic, gross and cool.

The humans are all great too – the positive representation for non-binary folks was awesome to see! By the end of the story, you genuinely feel a connection to these characters. Some of them are meeting this world for the first time, just like we are and there’s something nice about that; Jamie isn’t the only one and by extension, neither are we.

I will say that the build-up to the plot takes a while. There’s a lot to understand about how Kaiju Earth, the Kaiju and KPS all work. You need to know how all these moving parts slot together to get what happens later and to be fair it’s all very, very interesting – it’s world-building and it’s done really well. None of it is boring exposition – it’s all delivered by characters that are likable and interesting in their own right. But it DID leave me wondering exactly where things were going for a portion of the middle of the book. The ending was a very satisfying twist, though. Not going to ruin it for you, but man… sweet, sweet catharsis.

As I mentioned before, Wil Wheaton does an amazing job with this narration. He honestly sounds like he’s having just as good a time reading this as I was having listening to it – there’s a laugh inherent in his voice as he’s doing the funnier parts and he does a pretty good job with a few accents… he doesn’t try for the New Zealand accent when reading for Kahurangi, however. If he was worried he’d mess it up, I humbly offer my services as a Kiwi accent vocal coach for the sequel. (I’m hoping there is one.)

This all against the backdrop of 2020 through 2021. The pandemic, the US Election, Elon Musk, corporations getting worse, the climate crisis getting worse. I feel like this book had a lot of things to say that I just plain needed to hear.

All in all, this is a super fun read for any monster fans out there! Highly recommended.