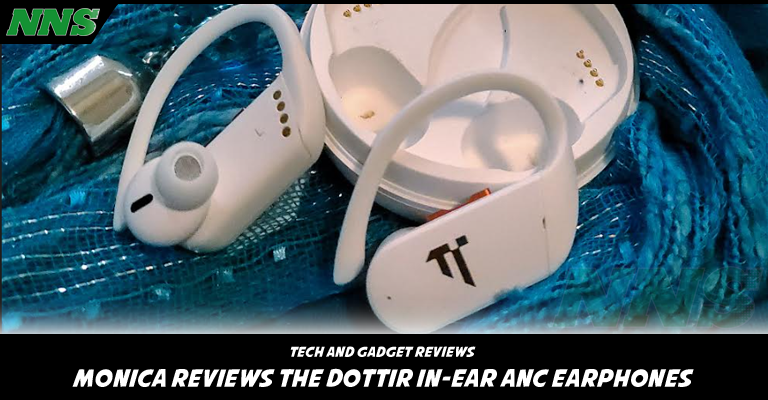 I’ve been using the Dottir in-ear ANC headphones for a couple weeks and they are fantastic!

As I mention in pretty much every article I write about headphones, my ear holes are very tiny and shaped weird. Most headphones don’t fit me right, and if they do fit okay, they end up falling out after a while due to my ears detecting them as foreign entities and rejecting them. Or sweating. Probably sweating. With the Dottir headphones, I don’t have the problem. They have a very secure fit, so when my ears inevitably see them as a threat, the ear hook prevents my body from ejecting the buds like a rogue toaster shooting toast. They resist sweat, they fit snugly into the ears and have a hook to prevent slippage during your most rigorous workouts. Though my most rigorous workout is finding a parking spot at Costco that isn’t 5 miles away, I did test these on the long walk back to my car while carrying groceries in my hands instead of in bags like some kind of animal, during which my three year old attempted to pull us both into the path of several moving vehicles. And that seems like the right kind of testing atmosphere for headphones not popping out randomly just to add to the chaos. The active noise cancellation is easily turned into transparent mode with a simple two second hold on the outside of either headphone, allowing someone with negative two arms to use one’s shoulders to allow for the ability to hear the horn of the car coming up from behind.

Dottir also features IPX7 waterproof design, ANC that knocks 35dBs off the surrounding nonsense so you can just make dinner in peace for once, and in-ear detection that will automatically pause what you’re listening to when you pull one bud out to answer your teen’s 500th stupid question for the day. Pro-tip, you can answer that question by using the built in voice assistant! Hey Google, how much does a fart weigh? It’ll mess up your algorithm to look up his dumb questions, but at least there will be answers.

All in all, this has to be my favorite set of earbuds. It’s marketed to athletes, but I would highly recommend them for just about anyone.

Pick up your own headphones at