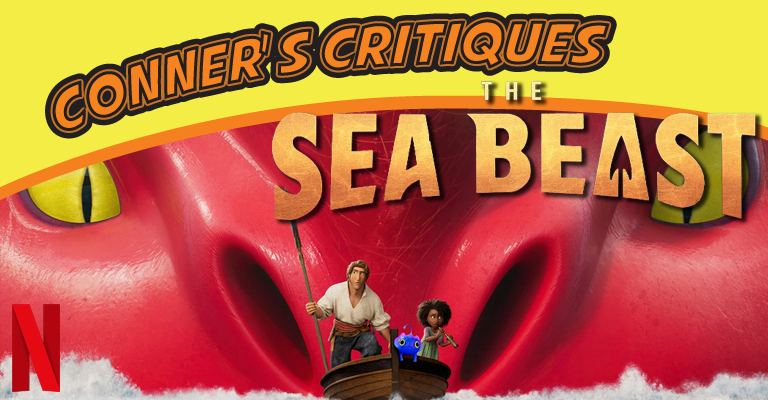 We are always on the lookout for good family films and if we already have the streaming service, all the better! Part of Netflix’s promise for new and amazing content involves creating as always we break down our reviews into three categories, Story, Acting, and Overall. So let’s jump in!

The life of a sea monster hunter is an adventure but also filled with sacrifice and the eventual hero’s death. It’s the adventure that children dream of. One such child was Maisie, who dreams of life at sea like her parents before her. One of her heroes is Jacob Holland, and Maisie looks up to him the most.
Having been rescued and orphaned at sea as a child Jacob and Maisie have a lot in common, but when the stakes get as high as their targeted monster is dangerous, a child sneaking onto their ship is more than Jacob bargained for.

When a mistake leaves Jacob and Maisie abandoned away from the ship’s crew, they will have to turn to an unlikely ally to make it home.

Zaris-Angel Hator as Maisie in the movie is a perfect voice acting job. She brings so much “vinegar” to the role. She is passionate and powerful with her dialog. She manages to master the hero worship while also being open-minded and willing to accept new intel before she makes a final decision.

“Karl Urban disappears into the role of Jacob … it’s amazing how light hearted his character comes off.”

Karl Urban disappears into the role of Jacob. There are hints of his voice, but considering how much work he has done to be grisly with his recent casting choices, it’s amazing how light-hearted his character comes off.

While the story is a bit formulaic and predictable it doesn’t take away from the journey. I will be honest and say that I predicted the ending of the movie with only the slight issue that I thought one mini-boss would end up being more important then they actually were.

When the viewing was over though I enjoyed the experience. It was like as if someone took the story in “How To Train Your Dragon” and made it about exclusively sea monsters then streamlined the lessons of the film into one shorter journey but still managed to keep all of the heart.

When all is said and done, this is a family-friendly movie that doesn’t belittle children, or sugarcoat everything. The sailors drink alcohol, they do sailor things, but they don’t really explain the minor behaviors and definitely don’t draw attention to them.

That’s probably the best way to handle it. You aren’t babying children and creating fantasy worlds that make no sense, but you aren’t making them attention-grabbing where children will ask questions.

The Sea Beast is coming to Netflix on July 8, 2020 and can be watched Here when live!