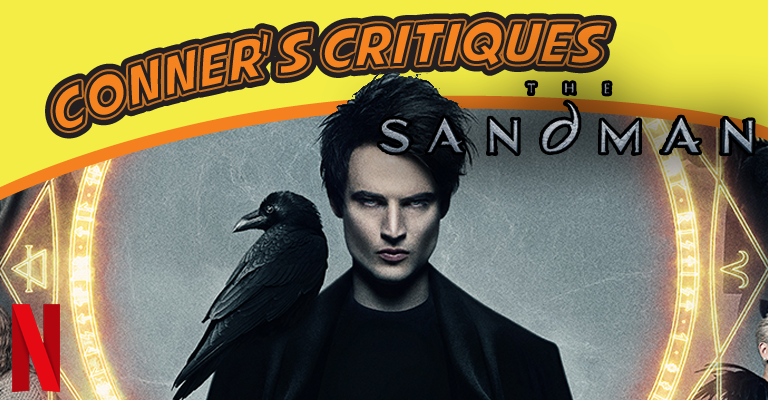 Very few people have the unique voice and inability to craft an image like Neil Gaiman. To be honest, there hasn’t been a single project he’s created that I haven’t loved. That’s why we were very excited to be able to get a sneak peek at The Sandman, the new Netflix show, before it aired.

We’ll be talking a little bit about the show, and I’ll do my best to keep spoilers to a minimum, but I will not view the first episode details as a spoiler. So keep that in mind.

As always our reviews are broken down into story, acting, and overall. So let’s jump in!

The Sandman story is a visually stunning story that takes viewers on a beautiful and amazing journey. Some people may have found it difficult to follow along in the comics due to the source’s flowery words, distracting imagery, and their pantheon of Gods.

A lot of the other followers of the Sandman may have come from Gaiman’s original teleplay about the series. Hell, you might even be here reading this breakdown/review due to the fact that you just heard of The Sandman from the new Netflix series. All of which are all valid ways to have found yourself upon the Sandman.

The Netflix show starts off with The Sandman forced to travel to the Waking World to capture a rogue nightmare that is wreaking havoc on awake humans. If you had watched the trailer you might think this show is solely about Sandman collecting his wayward nightmares.

Shortly upon arriving in the Waking World though, a mourning magician uses a spell to try to capture death, but unfortunately traps one of the other Endless instead.That Endless being The Sandman specifically.

The Sandman must wait and sit in his cell for decades as his vestments and powers are taken from him. As a direct result of his absence though, his home the Dreamland, crumbles as it lacks his stewardship. When he does escape his prison, he is too weak to rebuild the world of sleep, and must seek out what was taken from him. It is there that our show truly begins.

“The worlds shown in this show are beautiful and stunning, come alive from the comic books themselves.”

Throughout the story The Sandman is forced to travel to many places and worlds. The worlds shown in this show are beautiful and stunning, come alive from the comic books themselves,

If you are a fan of The Sandman comics for its visual stunning beauty, I think you will fall in love with this show for sure.

The casting of Tom Sturridge as Dream a.k.a. Morpheus a.k.a. Sandman and Boyd Holbrook as the wayward nightmare Corinthian is some of the best casting I have seen in quite some time. I think they shrunk Sturridges lips in post to make him look more like his comic counter part, but his lankey form, and pale white skin matches perfectly to Dream’s style of walking and interacting with the world.

Holbrook on the other hand exudes power, evil, and confidence. When matched with his tiny mouths for eyes he perfectly encompases the dark and skeming character of a Nightmare who refuses to stay out of the waking world.

Vivienne Acheampong who plays Lucienne is also a great character. Everyone in this series does a wonderful job adding to the series without taking anything from it. They continue to build on a broad and interesting world.

This is definitely a fun watch, but can sometimes feel like it requires a deep understanding of biblical, historical, and comic book knowledge to fully understand. I will say though that if you are willing to relax, lean back and take in the beauty and skill in crafting this series, you’ll be able to appreciate the series without any of that prior homework.

There is so much Sandman content available right now. If you love this season, then maybe check out Neil Gaiman’s teleplay, or pick up the comic books, or even check out the Audible story.

If you haven’t watched any of the episodes they are live now currently on Netflix.