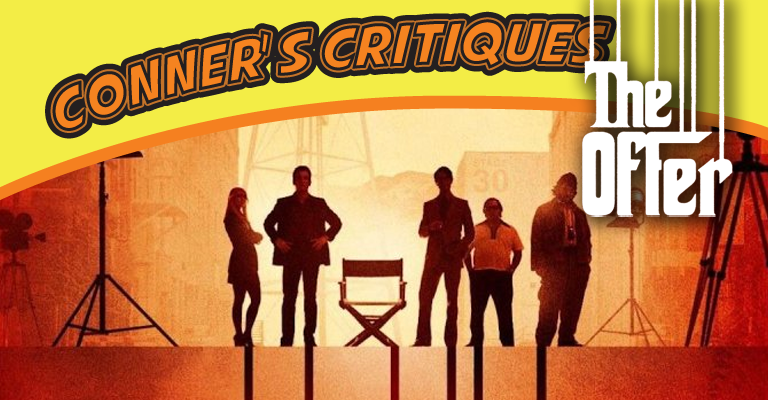 Today we are talking about The offer, a series that’s quite frankly incredibly impressive. I will admit that the fact that Paramount Studios is making a special series dedicated to the creation of one of Paramount Studio’s most popular films, feels a little bit self-congratulatory. All that aside though, let’s jump into our review of The Offer, the limited series that talks about the creation of The Godfather.

While we wouldn’t review a movie as old and studied as The Godfather, we feel perfectly find reviewing The Offer and will be doing so on the topics of Story, Acting, and Overall.

1970s Los Angeles. That is the setting for this story. In this series, we get to see the pivotal players and the creation of a movie known as The Godfather. Starting off early, we meet Robert Evans, a studio head that specifically picked up the rights to the novel The Godfather. Then immediately we shift to Mario Puzo the writer of The Godfather. Puzo had no interest in creating gangster stories but felt forced due to large amounts of personal debt. Thanks to the help of his loving wife, he compromised his ideals and created one of the most iconic stories of the criminal underworld.

We shoot forward a little further and meed Albert S. Ruddy, who worked on Hogan’s Heroes. His tenacity and drive caused him to become a producer at Paramount Pictures, and his actions all combine within the story then was assigned it’s time to look into and produce the godfather.

Some people might say this series is about “how the sausage gets made” and no one wants to see the sausage get made. I would counter that with, that there is so much more to the story of how The Godfather got made than just a bunch of people sitting around a room assigning tasks and pushing forward the project until the inevitable Premiere. This story focuses on a struggling major studio, in a time when other companies seemed to have had the magic formula for printing money. Add in a gaggle of real-life gangsters frustrated and angry at the depiction of Italians and organized crime within The Godfather novel.

All of this boiling and seizing is within a pressure cooker, held by one of the most charismatic men in Hollywood… At least as shown within this series.

“After watching this series I was drawn to pick up my copy of The Godfather and watch it again so that I may once more enjoy the journey with a fresh perspective.”

What we the viewer are left with is an engaging and enticing story that is an energetic and fun journey to the explanation of the world of 1970s Hollywood. After watching this series I was drawn to pick up my copy of The Godfather and watch it again so that I may once more enjoy the journey with a fresh perspective.

There are so many amazing performances it says within this series. Whether it be Dan Fogler playing Francis Ford Coppola, Matthew Goode playing studio head Robert Evans or the myriad of other actors filling the roles of this historic journey.

“The charismatic acting of Miles Teller, in the lead role, makes you want to watch the next episode immediately after the first.”

Too many actors stand out over the course of this story, the first of course being Miles Teller as Albert S. Ruddy. The charismatic acting of Miles Teller, in the lead role, makes you want to watch the next episode immediately after the first. I will warn that they took a lot of liberty editing his backstory though to make him seem like more of an underdog than he really was. While every story seems to need a villain these days, Giovanni Ribisi as Joe Colombo portrays a gangster, an Italian businessman, and a person who wants to make sure that this movie never gets made. His performance is strong and believable. It’s hard to believe that it’s the same actor who starred in Seth McFarland’s A Million Ways To Die In The West. But then again drama’s easy comedy is hard.

If you thought the story of The Godfather was engaging and enthralling, and it is, then you should definitely watch The Offer. The story of how this movie came to be, and all the inspirations that led to the great performance within, will have you enthralled as the hours of this limited series will melt away and trap you in your seat.

With regards to Paramount Studios telling a story involving Paramount Studios, they do a great job not over glamorizing the actual role of Paramount Studios. There’s no argument that Paramount Studios is still an existing studio that holds a lot of rights and power in the industry of entertainment, without them we’d have no Star Trek. However, the way that they’re willing to talk about the struggling nature of their studio during the 1970s before they made The Godfather, shows a profound understanding of the importance of history over “brand.” That decision however only strengthens my respect for their brand… so well played.

Watch the limited series of The Offer on Paramount Plus Here streaming on April 28, 2022.