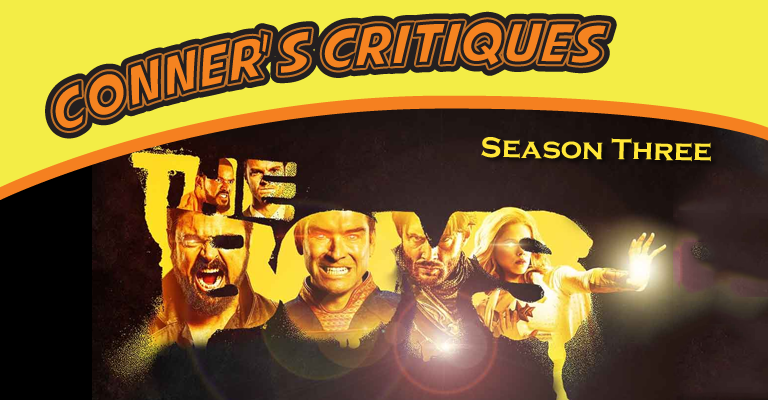 The boys are back for their third season and they are still delivering off-the-walls content. We got a chance to preview the entire season early and we are here to give you our basic thoughts about the show. NO SPOILERS, besides what’s already been shown off in the trailers! Okay… maybe a couple of spoilers.

As always when we review, we’ll be talking about the season regarding it’s story, acting, and overall. Let’s jump right in and talk about The Boys.

The boys are now with legit, no more operating in the shadows. They are working hand-in-hand with the CIA to out, arrest, and punish any supes who step out of line or cause a lot of collateral damage. Working above board puts a lot of restrictions on the way that Butcher traditionally operates. Also, having to answer directly to Hughie doesn’t help.

No matter how many supes are taken down though, it doesn’t matter. Lingering on the minds of The Boys, is can we do if Homelander can no longer be controlled.

They decide to start looking into the death of Soldier Boy, the only other Supe that was anywhere as powerful as Homelander. Their hope, is that any weapon powerful enough to kill Soldier Boy might be able to kill Homelander.

“If you are a fan of the original comic book and have been frustrated by the deviations within the series, then this season will bring you back into the fold!”

This season the show features a lot more characters and beats from the comic books. They bring back Love Sausage, Little Nina, the boys having powers, and even Soldier Boy! If you are a fan of the original comic book and have been frustrated by the deviations within the series, then this season will bring you back into the fold!

It’s easy to say that the characters played by the existing and returning cast from The Boys have once again done a stellar job. Both The Boys and the Seven actors have mastered their characters. This is good because it is the third season. The group of actors I really want to give attention to though, I can’t talk about. If I do it would be considered a bit of a spoiler.

However, who I can talk about is Jensen Ackles as Soldier Boy. It turns out that he did a lot of research into how to be canceled before playing this role. A lot of people will try to make the association between Soldier Boy with Captain America. This raises an interesting idea about whether or not you’re a product of your environment or your environment is a product of you.

During the forties, the time that Captain America and Soldier Boy originally come from, there was a lot of racism and bigotry due to the close-mindedness within that generation. Whereas Captain America’s character represents hope and open-mindedness, he may have just been blind to the facets surroundings his time period. Nothing about him specifically is outwardly racist. Jensen Ackles’s Soldier Boy revealed the racism and close-mindedness of his era.

His opinions about sexuality, ethnicities, and the world, in general, are highly offensive. Almost everything he says is outdated and designed to be canceled. While I don’t like the character of Soldier Boy, I have to give props to Jensen Ackles, a likable and amazingly talented actor, for leaning into the horrors of the character he was able to portray so well.

While this season has a great story, and it follows closer to the comic books. It does somehow feel like a smaller story than the prior seasons. It might have something to do with the fact that the journey covered in this season appears to only take place over a couple of days. If that is accurate, then this would be the shortest period of time covered by a season of The Boys so far in the series.

It stands out and makes it a bit weird. That being said the show is still a lot of fun and super violent!

They set up a really cool scene in the comic books and put all the puzzle pieces on the table for a great scene from the comics, which I won’t mention for a potential spoiler or anti-spoiler reasons. The scene never happens, it’s not alluded it, and it doesn’t even look possible for future seasons. That’s a frustrating Anti-Chekhov’s Gun.