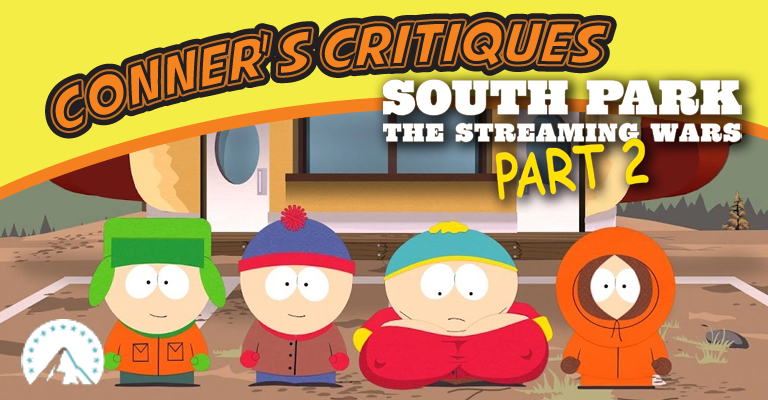 When I wrote my first review for Streaming Wars from South Park, I did not expect there would be a part two. I guess I should have figured though, since it left part one with so many cliffhangers.

The show picks up where it left off, apologies for the spoilers, with Tolkien’s father being missing, Randy going full Karen, and the boys being caught between all the streaming services providing content, AKA popsicle boats. Oh yeah and Cartman has a big pair of boobs.

Before watching Streaming Wars, I watched a YouTube video about the transition of Randy Marsh being a “straight man” and then becoming a major comedy foil for the series. You can see that YouTube video Here. It’s interesting that Streaming Wars part two directly addresses this factor, and attempts to make corrections, or repair Randy Marsh’s character. I wonder if the character will retain some of these changes are return to being as insane as in the past. They’ve left the door open for both.

It does wrap up the first Streaming Wars film’s cliffhangers. I don’t know how much of this will carry onto the show later, or if everything will remain the same. It would be weird for them not to address it.

There’s something specifically new to bring up here in this section, the characters are uniquely the same. The people at South Park do a great job voice acting multiple characters, as well as creating the characters for the series. One of the best characters however is probably Randy Marsh who keeps going full Karen throughout the movies.

As we said before, the creators of South Park feel slightly Bad for making fun of Al Gore and climate change, specifically the creation of Man Bear Pig. However, the character of Man Bear Pig has severely changed over the years. This series of movies specifically takes time to delve a little deeper into the character. They even admit that we are entering into a different stage and level of climate change. They even press the idea that we might need to start rethinking our way of dealing with “Man Bear Pig.” However, as humanity, and the denizens of South Park are selfish and don’t care, they move on once they realize that they have enough resources for this summer.

All in all, it’s a fun watch, and fans should watch this to make sure that they are up-to-date before the new season launches.

What exactly happened to the creators of South Park with regards to crypto. Why do they hate it so much, well that and NFTs. I’m not saying they are wrong to be upset, ot not, it’s just that they very clearly have distain for the securities. They made a point to target almost every single celebrity who shilled, pushed, or tried to incorporate forms of crypto currency at any period. Including stars like Matt Damon all the way to Larry David.

I am still sad though that they did not incorporate the Paul Brothers. Their multiple attempts to shill crypto currency has been well noted by others in the industry.