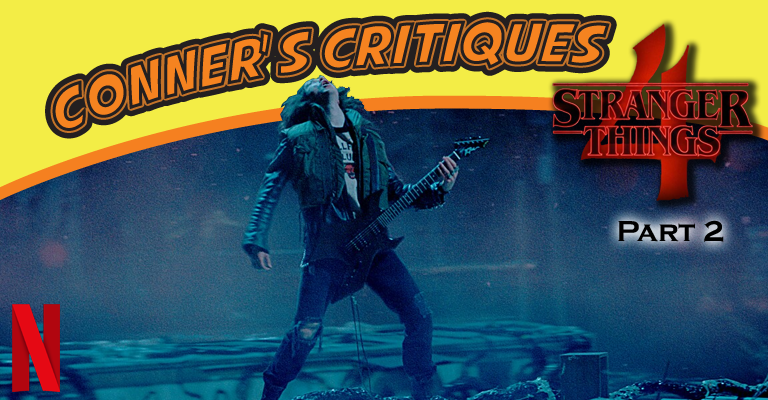 Part two of Stranger Things season 4 has come to a close and what an explosive two episode part two that was. While it was only two episodes, the total run-time of the two-part second half of season 4 is three hours and forty-nine minutes. Quite a bit of content.

So we’re gonna dive in and talk about Story, Acting, and Overall for part two. Keep in mind that part one is integral to discussing part two, so there will be spoilers to part one. If you haven’t watched part one, or you want a reason to check out why you should, check out our Conner’s Critique of part one Here.

Part two comprises the entirety of the battle plan for the group. They formulate their plan, they enact their plan, and it’s the conclusion of the season. All of which into an incredibly long set of episodes. This conclusion is best watched with both of the two episodes watched at once, as opposed to watching on two different periods of time. It just makes more sense, trust us.

Where we left off with part one of the season, Spoliers, Turn Back Now But we’re left off at the end of season 4 part 1 is the realization that Vecna is One, the first person to be Brenner’s test subject. A vile person that Eleven sent to the upside down years prior. With this major reveal Eleven feels partly connected and responsible for the ordeal that her friends are now engaging in. She doesn’t believe that her friends are safe, so she remote views where they are and sees that they are planning their attack on Vecna, but she knows that they don’t stand a chance against his powers. She then finds a unique way to help them, because of the time period and the distance, she wouldn’t be able to physically make it in time.

”I think that this season finale of Stranger Things packs a powerful punch and hurts quite a bit. The stakes are high leading into season 5.”

As far as stories go, this is probably one of the best conclusions of a season of Stranger Things, since its inception. The plan is formulated by all the parties, knowing what’s going, and caring and supporting one another is so powerful and on point.

I think that this season finale of Stranger Things packs a powerful punch and hurts quite a bit. The stakes are high leading into season 5.

This is probably some of the best acting that we’ve seen out of this series from Winona Ryder, who plays Joyce, and David Harbor, who plays Hopper. These characters each have so much baggage on them, all acted perfectly, and a longing for each other that not even all of Russia could keep them apart. Their journey to find one another is not only compelling but slightly heartbreaking.

Millie Bobby Brown does an amazing job as Eleven once again. Earlier in the season her acting was a little bit wooden, but since the Nina Project, her acting has gotten stronger and packs the punch that we expect from one of the main characters. I have to admit though that my favorite character in the show is once again Max. Her strength and determination to take out the enemy is incredibly powerful, while also being heartbreaking at the same time.

While there is a lot of content in Season 4, it feels relatively short in comparison to other seasons. All taking place in less than a week’s worth of time.

While it might be a bit too much to do in one sitting, if you were able to watch all of part one and part two together then I would highly recommend it. It was unbearable to have to wait between part one and two. I don’t understand specifically why they made us wait… unless it was all just the choice of Papa! I mean Netflix.

This season is going to hurt. The Duffer brothers made the stakes very clear and explained that they would be taking someone from us, no one was immune. The repercussions for Max, based on the actions of the other characters in their effort to stop Vecna will continue to have a lasting effect. No matter how much of a warning we were given, we were not prepared for the amount of hurt that has occurred and will continue to occur for this series. You might want to bring some tissues into the room for the season 4 finale.

Part two of Stranger Things season 4 is airing right now on Netflix now, with season 5 coming down the line, and concluding the series.