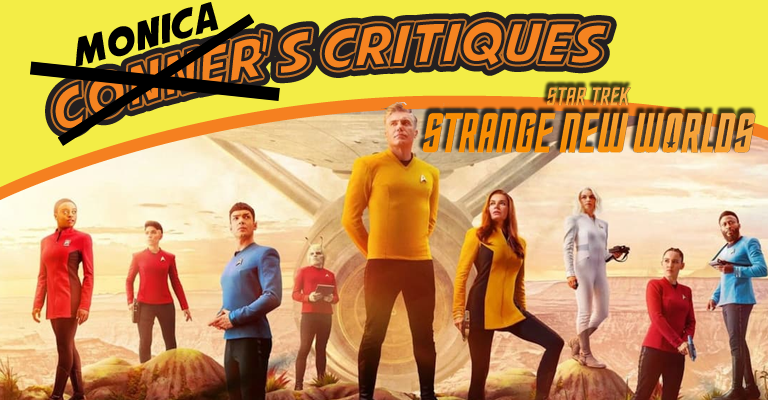 It is time once again to talk about Paramount+ and their awesome lineup of Star Trek programming. This time though we have the new Star Trek show called Strange New World. I recently got a chance to talk to the main cast of the show, (you can see that article Here), but now we are here to review our preview of the first season.

We only got the first five episodes of the first season, so take that in mind when reading our review. As always we’ll be talking about the show in regards to its story, acting, and overall.

So let’s jump in!

The story starts off with Captain Pike on leave from Starfleet as he tries to relax and recover from the events that occurred at the end of the 2nd season of Star Trek Discovery.

His superior wants him to go back into space, but Pike doesn’t feel like he’s ready yet. However, when he discovers that his Number One, Una Chin-Riley, hasn’t checked in with Starfleet during a first contact event, he is forced to return to the enterprise.

With the help of Spock and La’an Noonien-Singh, his new chief security officer filling in for Number One, they are forced to meddle in a delicate situation to try to save star fleet personnel, before things get worse while also skirting the rules of the prime directive.

After the events of the first episode, everyone is put back into their position within the Star Trek series and the show picks up a normal adventure of the week format. The crew boldly goes where no man has gone before. However, while enjoying solo adventures, the series delves into and engages in events and politics of the Galaxy on a widespread feel.

The stories told in the first five episodes feel very familiar with the energy and feel of the original series with Captain Kirk. However, the system of the world and governance feels a lot closer to that of Next Generation than the original series. There’s just a much larger mentality with regards to the ripple effects caused by the storyline in discovery.

Immediately we have to talk about Anson Mount and his role as Captain Pike. As he said in our interview, this is an entirely different Pike than anyone has seen before, compared to the Kelvin universe Captain Pike played by Bruce Greenwood and the original Pike played by Jeffery Hunter. While Kirk felt highly charismatic, almost like a space pirate, Picard was an orator. Sisko was a strategist, and Janeway seemed to personify hope and perseverance. So what does Pike bring to the captain’s table? He listens. He seems to make everyone on his bridge feel heard and always has time for another opinion.

The only drawback I feel in this series, is that while they do a good job throwing out a couple of crumbs to why he was hesitant to go back into space, once he does in the first episode, it’s like we can just forget his hesitation so perfectly presented in the first episode. I would have loved to see them play more with that in the series.

“…the stand out performance of the series appears to be Melissa Navia as Lt. Ortegas and Jess Bush as Nurse Chapel. They are fun, and you want to see more of them through the show.”

The performances of Ethan Peck as Spock and Rebecca Romijn are great for the series, feeling right in place on the enterprise, but I have to say the stand out performance of the series appears to be Melissa Navia as Lt. Ortegas and Jess Bush as Nurse Chapel. They are fun, and you want to see more of them through the show.

I highly recommend that you check out the second season of Discovery before watching this show. Since this is a Paramount+ exclusive, you will have access to the whole series on the platform, so there is no reason not to!

Make sure to tune in on May 5th, streaming Here!