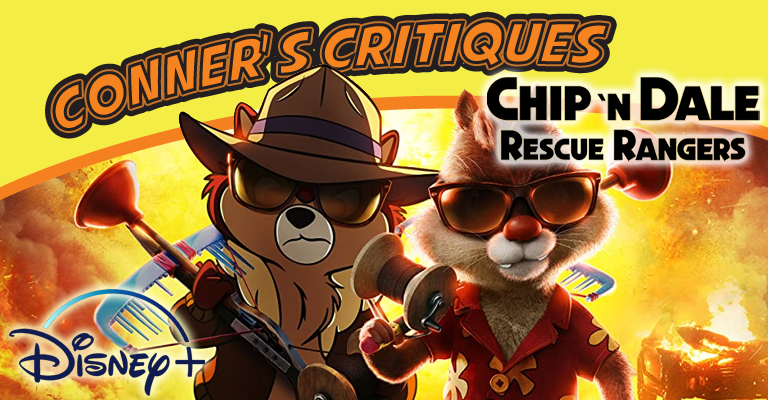 As a kid growing up with TV shows on Disney and ABC I fell in love with the cartoons created by the house of mouse. Shows like Mickey Mouse, Chip and Dale, as well as the infamous Rescue Rangers series.

That crazy show was always on the top tier of enjoyable series that I was lucky enough to partake in while growing up.

When they announced they were doing a live-action movie, with CGI and traditional animation style mixed in, I was hesitant about what could possibly happen to my beloved series. So let’s dive in and see if my fears were right!

As always we break down our reviews by story, acting, and overall!

Rescue Rangers is a new movie that’s come to Disney+. The movie touches on the Disney staple characters of Chip and Dale. The story starts off at their young age living in a world that feels very similar to the world showcased in Roger Rabbit. In a place where cartoon characters and real-life people live together.

The show then introduces people to exactly how Chip and Dale became friends. Being outcasts and strangers in an unfriendly world. Then the movie fast forwards showing how they worked together to make it in Hollywood and eventually got their own show, Rescue Rangers. However due to resentment, and ambition one of them breaks off to make it big, causing the show to be canceled and the end of their friendship.

The movie now can officially start. Chip and Dale have very different lives, but they are forced back into each other’s world when a longtime friend and co-star, Monterey Jack, is kidnapped, It appears that only the Rescue Rangers are able to solve this crime.

I don’t want to talk a lot about the plot points, even all the cameos that are in this movie, but the amount of animation references they make is quite an amazing job.

When it comes to acting, the acting in this series is primarily performed by voice actors. With John Mulaney and Andy Samberg playing the title roles of Chip and Dale. This was probably the biggest change to the series, even when considering the story I mentioned right above.

There were a few times that we got to enjoy the traditional voice of Chip and Dale as they were in the series, but it was used as a joke about how when they were incredibly excited. Their voice would reach a higher pitch and when they entered Hollywood they perceived that people would like their personas more and find them funny if they talked like that for their show.

But do Andy Samberg and John Mulaney really showcase Chip and Dale? While I really did enjoy the performance in the movie, and they did not fail at delivering the energy and excitement of the roles, I have to admit their performances stand out from how the characters were presented to the viewers prior. It separates you from the world of Chip and Dale. I wouldn’t specifically be giving their acting a negative take, it’s not their own fault. It’s just bad casting by Disney.

I mean this feels an awful lot like Chris Pratt is Mario.

As for good choices, I have to take a minute to really celebrate the casting of Tim Robinson as ugly sonic…His attitude as ugly sonic is probably my favorite thing out of the entire movie.

As for good choices, I have to take a minute to really celebrate the casting of Tim Robinson as Ugly Sonic. I don’t feel like this is a spoiler, since the news of Ugly Sonic’s performance in the movie had been released and shared since the 1st minute that the movie came out. If you don’t know who Tim Robinson is, he is a comedian who is currently best known for his works on Netflix’s show I Think You Should Leave.

His attitude as Ugly Sonic is probably my favorite thing out of the entire movie.

The story is enjoyable, the fact that it feels almost like a spiritual successor to Roger Rabbit is a major boon and a feather in the cap of the film, but did it really have to focus on Chip and Dale? Did they have to vehemently change the characters? At the end of the day, the film feels like an animated series designed primarily for people of my age, having grown up, but still tries to hold on to the edifice and style format of being a children’s movie. If you do watch it with your child though you will have to explain a lot of things.

I personally loved the universe that was created within this movie. I just would have loved to see it used with maybe a different franchise. Not Chip and Dale. I swear to God though, if Disney does this to a Darkwing Duck reboot or movie, I will be livid!

Additionally, I have to mention, if only in passing, the news about the way the villain’s story seems to connect with the actual historical sad acts that took place with a young actor that Disney a long time ago abandoned. I understand that the journey of what happened to him was tragic, but it would be ridiculous to apply that as if the current run of Disney had done. It’s also weird to think Disney would intentionally want to bring attention to that story.