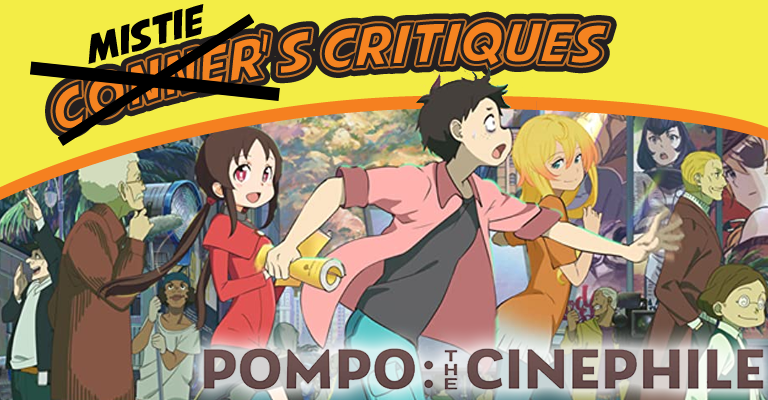 Pompo the Cinephile is about the creative process of bringing a story on film to an audience. We are taken on a journey alongside the main character, Gene, who loves movies. Gene works as an assistant to the titular Pompo, a director/writer/producer known for her ‘B’ monster movies. Gene absorbs everything he can on set, learning the methods of the craft and finding that perfect shot to perfectly convey the story to the audience. Can Gene use the knowledge he has gained as a fan and assistant to director Pompo and become a success? You will have to watch this film to find out.

Slice-of-life-styled stories are some of my favorite offerings from animated media because of how relatable the moments and story beats are.

In Pompo the Cinephile, it is so easy to stand in Gene’s shoes in the moment as his story unfolds.

In Pompo the Cinephile, it is so easy to stand in Gene’s shoes in the moment as his story unfolds. Some of the storytelling leans hard on fantastic coincidences, but it levels out with very modern problem-solving. Gene faces challenges of creative work fighting against deadlines, budgets, weather, and the dreaded editing process.

While there are subtitles for the western audience, the voice talent is spot on.

The moods, attitudes and inflections of emotion match up perfectly with each character’s design for the role they play in this film.

The moods, attitudes, and inflections of emotion match up perfectly with each character’s design for the role they play in this film. You can close your eyes and hear the nervousness, the joy, the smarmy, the confidence, and the determination in the character’s voices alone. The voice cast is unique and distinctly separates one character from the next.

Overall, the animation style is modern in design. While there are some characters that are designed more like a personification of their essence, the majority of the characters are grounded in more realistic design and movement. The pallet of the film is vibrant. Pompo the Cinefile is an uplifting story set in one of the hardest environments to gain a foothold, big film industry. The story draws you into itself, then grabs your hand and doesn’t let it go. You will want to see it through to the very end.

This film is for those who know and love the hard work it takes to make something for an audience. It does a great job of showing us the thought process involved and how one person can take threads of inspiration, learn trade skills and tools from multiple people in their chosen field and use them to create a vision to share with the whole world. Pompo the Cinefile is a perfect 90 minutes.