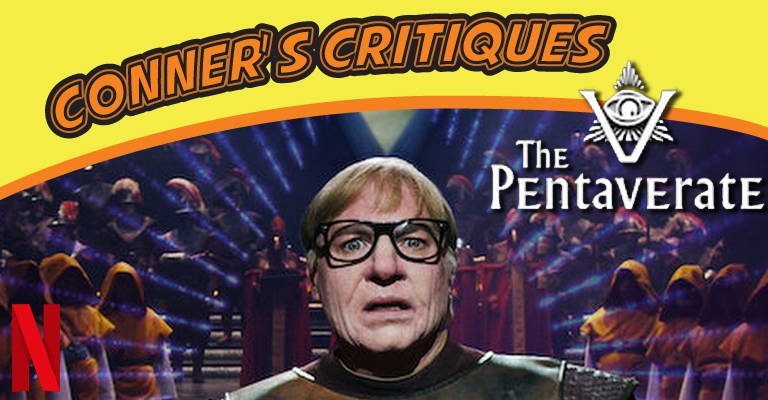 We’re huge fans of Mike Meyer’s, and getting to see him create an amazing series that is part comedy, part action, and part wholesome message was a bonus for us. So we reviewed The Pentavete on Netflix.

As always our reviews consist of talking about the story, acting, and our overall thoughts.

The story is about a secret society, but this one is nice. The Pentaverate is a group that has existed since the black plague and specifically has a goal to keep humanity safe. The group has consisted of some of the smartest people of all generations.

The story starts shortly after one of the members of The Pentaverate is murdered, under mysterious circumstances, and The Pentaverate must turn to scientist Professor Clark to help solve cold fusion in order to save the planet from global warming. At the same time, Kent Scarborough has lost his job as an investigative reporter. He has only one chance to try and uncover a conspiracy so bold that it allows him to get his job back. When all things start to point Kent to The Pentaverate, it puts extra strain on this not-so-secret secret society.

It is very much a light hearted comedy that has no business being as good as it is.

It would be wrong of me to say this show is groundbreaking and amazing. or even that it should be taken seriously. It is very much a light-hearted comedy that has no business being as good as it is.

There was generally a moment in the series that is incredibly heartfelt, and I felt myself starting to have a swelling of emotions. I had to stop myself and say no, “This is a stupid comedy! You’re not allowed to be this emotional!” and I got over myself. But they almost got me!

It’s hard to qualify an acting score for a show like this, which Nutty Professors’ it’s way through the series by having Mike Myers play 45% percent of the main cast. Don’t get me wrong, there are some characters he plays amazingly. For instance Lord Lordington, Bruce Baldwin, and what might arguably be the main character Kent Scarborough. However, for each amazing character he performs, there are others that fall flat and just feel phoned in. It’s almost like they gave him a budget to make the show, and he wanted it to be better, so he cut the budget to the casting and had to perform all the extra roles to be in the black, and he didn’t want to have to play them, and you can see it in his performance.

Ken Jeong and Keegan-Michael Key do amazing jobs within the series as billionaire Skip Cho and Professor Hobart Clark. The person that I want to give the most credit for in this entire series though is Jeremy Irons. The power of an intro narrator has never before been showcased so perfectly in this show than anywhere else. The fact that he’s able to be so amazing and enjoyable within less than a minute of voice-over time during the opening credits of the show for each episode is impressive. As he says in the second episode “Don’t you dare hit that skip intro button!” If you do you will regret it…

At the end of the day this is a light-hearted comedy, it makes you chuckle. It fills the void of sorry that our increasingly disheartening and upsetting world seems to create. A lot of horrible things are happening right now with people losing individual rights, entire nations being attacked due to one man’s greed for land and power, and a pandemic that is still holding on to the human race. It’s important that we take some time to be able to laugh. This show definitely performs in that and if you’re a big fan of the Austin Powers series I could honestly see this series and secret society existing within that world of Austin Powers.

I wanna give a warning to anyone reading that if you watch this series you will see Mike Meyer’s penis in the show. I didn’t think I’d ever have to put that in an article, but if I don’t warn you, you’d be angry at me for not warning you. However, if you can tolerate that, there are definitely some fun things to enjoy within the show. Additionally, there is an easter egg that I don’t want to spoil here for fans of Myer’s works.

Make sure to stick around through the credits of the last episode for a heartfelt tribute by a much younger Mike Myers.

Lastly, before I check out I wonder if Netflix knew that Mike Myers was gonna poke so much fun at them during this show. But it’s too late now Netflix, it’s already live! See you guys next review.