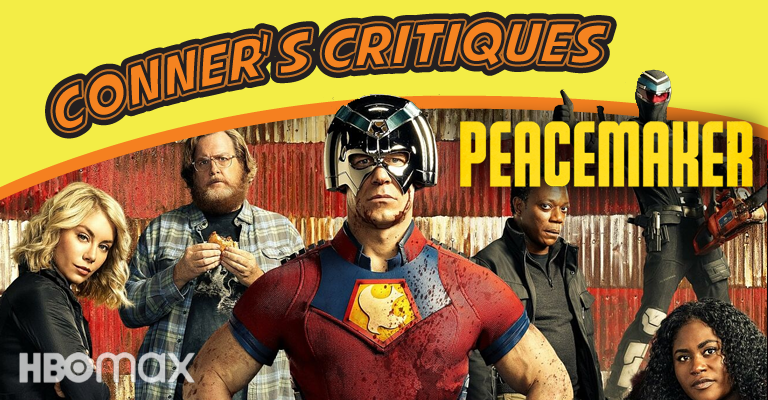 We loved James Gunn’s introduction to DCEU with the likes of Suicide Squad last year, and we were thrilled to hear about his coming show Peacemaker in the past, but now Peacemaker is out. If you haven’t seen it, I will warn you that there might be a little bit of SPOILERS in our article, but we will do our best to prevent it.

So let’s jump in and go balls to the wall with our review, as always our reviews focus on Story, Acting, and Overall.

Picking up for where we left off in Suicide Squad, Peacemaker has been injured due to being shot in the neck from Bloodshot, played by Idris Elba. Awaking in a hospital, and believing he’s free, Peacemaker races off as fast as he can to his safe haven. His freedom is short-lived, however, as the US Government arrives and delivers him the next assignment from Task Force X.

Peacemaker’s new assignment is Project Butterfly, but no one would give him any information about the task. Peacemaker must now work as the main agent of brand new team, can he still do whatever it takes for peace?

We delve deeper into how a person like Peacemaker is made. We are introduced to Peacemaker’s father, a racist supervillain who went by the name White Dragon. The series shows his home life, his pre-prison friends, and presents the man under the toilet bowl-shaped helmet.

This show is pure action, comedy, and has amazing dialog, which is everything we expected from James Gunn. Each character of the series has deep levels of story, while still somehow feeling like the style of one-note comic book characters.

Without going too deep into details, it’s interesting to see the effects of the murder of Rick flag. How it plays on Peacemaker’s mind and makes him question the person he really is. Perhaps he’s learned that sometimes the price for peace is too high. This is made more clear when Peacemaker is asked to murder children for the sake of humanity.

The over-the-top acting of John Cena as Peacemaker is so impressive especially when played opposite to his heartbreaking and depressing self-realizations. How John Cena is able to make us like such a deplorable figure, with very few redeeming qualities, is a testament to his ability to act.

Freddie Stroma as Vigilante is also a lot of fun. His dialog is hilarious, his fight choreography is top-notch, and is a subtle and impressive part of the story. I’m glad that James Gunn decided to reshoot every scene for Stroma when Chris Conrad backed out of the role. No matter how much I love Stroma’s performance, the person that really shines the best is Danielle Brooks, who plays Leota Adebayo. Adebayo is a newcomer to the world of spy espionage and represents an everyday person’s mentality towards the story.

While there is more to her character than just being a newcomer, it is really fun to listen to her dialog. The value that her character’s point of view effect brings to the story is invaluable.

Overall the series is definitely a major watch in my book, especially if you like raunchy and dirty and violent content.

I will warn you that there is nudity in the first episode, a lot of just very graphic violence, and Gore demonstrated throughout the entirety of the show. So definitely don’t watch this show with your kids. Also, if you don’t like that kind of content, I would recommend steering clear.

While a lot of DCEU content can be fun and enjoyable, it raises a lot of questions of what is part of the DCEU, and what is not. It would appear that this series is somewhat at least generally connected to the world of Justice League, Superman, as well as a couple of the newer movies coming out in theaters.

However, due to its over-the-top style and humor, I feel it’s very likely that we will never see the effects of the Peacemaker series or its characters again within the DCEU-verse.

This is sad because the fun that James Gunn has brought to the DCEU with just these 2 projects, is quite impressive. Especially when you look at how dark and morose a lot of the other stuff within that universe has been.